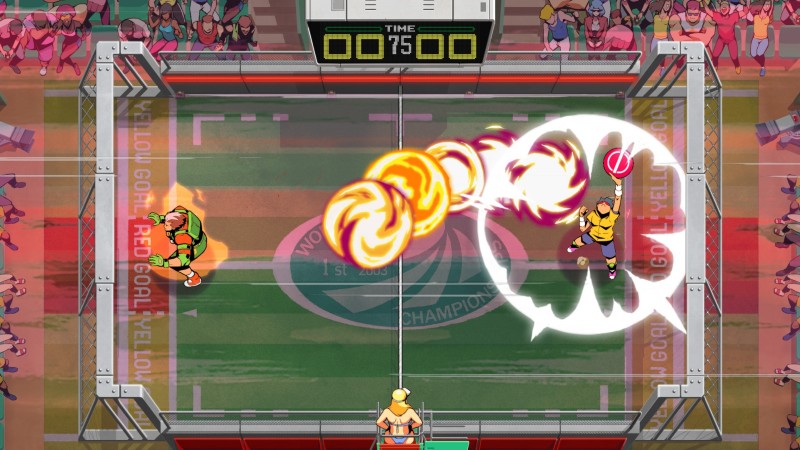 Windjammers 2 has been coming along for a good while now, and although it still doesn’t have a release window, developer Dotemu suddenly announced it’s getting an open beta beginning tomorrow. The team also confirmed that the game is coming to PlayStation consoles after previously being listed for Switch, PC, and Stadia.

If you’re cocking your head sideways, wondering what the heck a Windjammers is, the original game hit arcades in 1994 and is essentially air hockey but with a frisbee-like disc. Two players face off in one-on-one bouts using colorful characters sporting individual strengths and weaknesses to try and lob the disc into the other’s goal. Its fast-paced action made it a cult favorite, and an enhanced port of the game came to PS4, Vita, and Switch. Meanwhile, the sequel was announced in 2018, so needless to say, it’s been quite a long time coming for today’s announcement. For an additional refresher on how the game works, a new trailer helps bring players up to speed.

Starting August 11 at 9 a.m. ET, and running until August 22, players can log into the beta on PS5, PS4, and PC via Steam. The test gives access to four characters: returning faces L. Biaggi and Gary Scott and newcomers Steve Miller and Sophie de Lys. Online ranked play will be enabled (but no crossplay between console and PC), meaning you can ascend to the top of the leaderboards during this test. Meanwhile, playing fields include a beach, stadium, a ring, and a rooftop complete with shot-deflecting bumpers.

Upon release, Windjammers 2 will feature a larger roster boasting new power moves, unlockable minigames, and a new arcade mode. It will also feature local competitive play. While we still don’t know when the game is releasing, an open beta is always a good sign and will help work out any kinks to boot. Here’s hoping the full Windjamming experience arrives before the year is out.

For more on what Dotemu has in the pipeline, check out these stories on their upcoming titles Metal Slug Tactics and Teenage Mutant Ninja Turtles: Shredder’s Revenge.