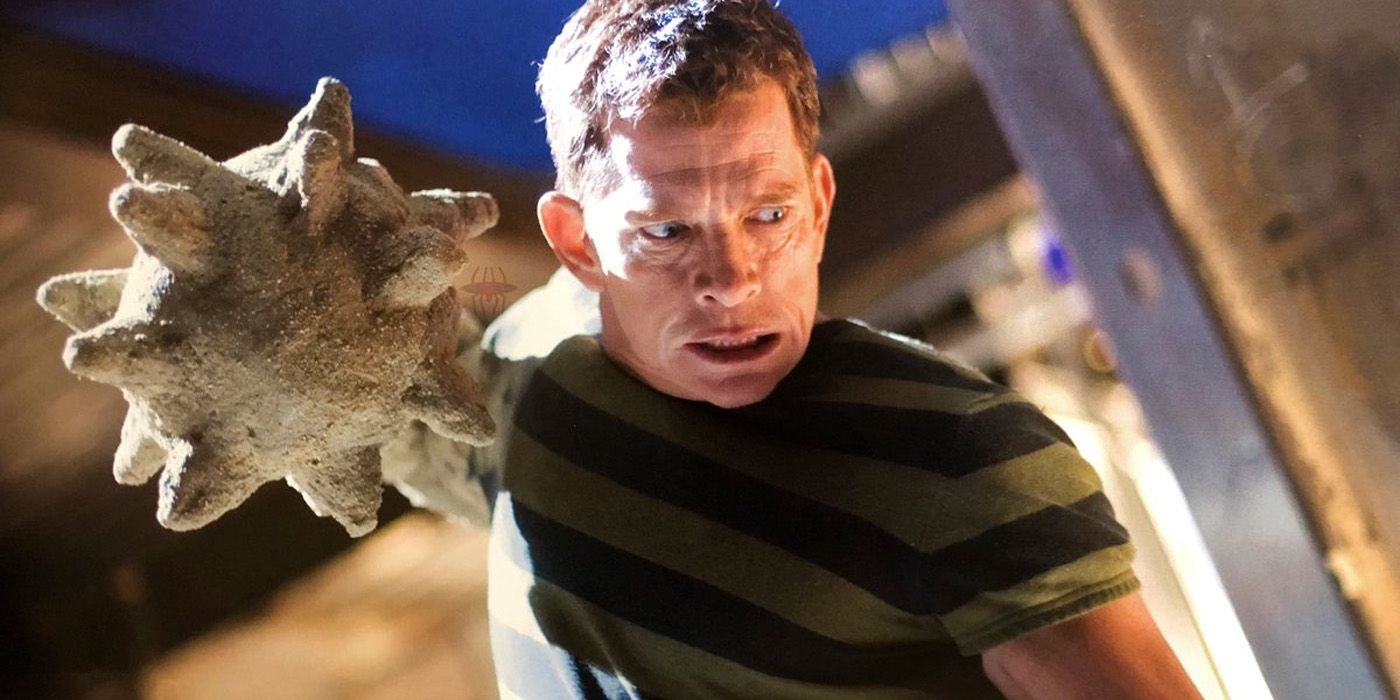 Compared to the current landscape of superhero movies, the failure of Sam Raimi’s Spider-Man 3 seems almost quaint. While many of the core issues would foreshadow trends within the genre that would become more common, namely studio interference and an overemphasis on setting up future installments, it’s also unquestionably the work of a distinguishable voice. The most glaring issue with The Amazing Spider-Man films (and in some ways with the Tom Holland MCU installments) is that they feel produced out of obligation to fulfill contracts. Neutered as it may be, Spider-Man 3 is still imbued with a signature Raimi weirdness.

Raimi had knocked it out of the park with his first two bad guys, and the most glaring of Spider-Man 3’s issues is the decision to include too many villains (a flaw that was ironically replicated in The Amazing Spider-Man 2). Forced to include rival photographer Eddie Brock/Venom (Topher Grace) by Sony executives, Raimi’s interpretation of one of Spider-Man’s most famous antagonists as a sniveling tabloid journalist was downright embarrassing. Despite a brilliant hook at the end of Spider-Man 2, the development of Harry Osborn (James Franco) as the New Green Goblin was sidetracked by an amnesia storyline that disrupted the dramatic tension.

Despite its messy approach, Spider-Man 3 absolutely nails it with Thomas Haden Church as the street thief Flint Marko, who is transformed by a freak particle accelerator accident into Sandman. Sandman appears as a consequence of Peter Parker’s (Tobey Maguire) actions and challenges his very origin, and Church’s performance is suitably empathetic and grounded, especially in comparison to the exaggerated work of Grace and Franco. While he doesn’t single-handedly erase the issues with Spider-Man 3, Sandman is among the franchise’s best (and most underrated villains).

RELATED: The Most Iconic Spider-Man Moments in Tobey Maguire’s Trilogy

Sandman enters the narrative with an unthinkable revelation for Peter; he never got justice for the death of his uncle, which inspired him to take on his superhero identity in the first place. While the reveal by NYPD Captain George Stacy (James Cromwell) is somewhat awkwardly inserted into the film’s opening scenes, it’s integral to setting up Peter’s character arc before he dons the symbiotic black suit and the dance moves that accompany it. Peter is wrestling with his darker impulses and considers more brutal tactics; having a villain that spurs him on a mission of revenge exacerbates his inner clash.

It’s effective to have a villain who is openly regretful from the beginning. Willem Dafoe’s Green Goblin and Alfred Molina’s Doc Ock began as noble characters who were spurned by tragedy to take up villainy, and it was only at the end of their respective films that they saw the errors of their ways. Marko knows the consequences of his crimes and wants to move forward, but the medical costs of his daughter’s terminal illness have forced him to continue with petty robberies.

It’s also notable that he’s the rare Spider-Man screen villain who comes from a different social class; he’s not wealthy and gifted with resources, and his scrappy lifestyle makes Church’s performance more empathetic. Marko also isn’t a scientist, so his knowledge of his body’s transformation is limited and he faces many of the same discomforts that Peter did in the first film. As a result, he’s not able to develop advancements to his suit like the Goblin or Doc Ock were, making his movements less fluid and the action sequences more dynamic.

Marko’s actual transformation into Sandman is downright beautiful. While much of the early CGI in both Raimi’s trilogy and The Amazing Spider-Man films has already begun to show its age, Sandman is gracefully visualized without detracting from the poppy energy. Church worked with early motion capture technology to personalize Sandman’s movements, and he captures Marko’s simultaneous wonder and horror. It’s as if Frankenstein’s Monster possessed a consciousness and was forced to accept his new role.

Sandman is unique in that he’s not a stand-in father figure for Peter, a gap the Goblin, Doc Ock, Rhys Ifans’ Lizard, Michael Keaton’s Vulture, and Jake Gyllenhaal’s Mysterio also sought to fill. Peter doesn’t have any pre-established affection for Marko (quite the opposite), which makes the message of forgiveness more impactful as he tries to put himself in the flawed man’s shoes. Peter isn’t looking for guidance; Marko actually seeks acknowledgment from him.

It’s remarkable how quickly Spider-Man 3 falls apart during Sandman’s disappearance from the story. Church adds real stakes to the opening scenes, and Sandman’s escalating robberies are well-matched with Peter’s more impulsive attitude. It’s once Sandman is temporarily defeated (and Harry Osborn is left without memory) that Venom is placed at the film center. With a villain that clearly lacked Raimi’s passion and a grating love triangle no one asked for, Spider-Man 3 takes a turn for the worse. Church isn’t just the best part of the movie; he basically salvages it.

Yet as soon as Marko re-enters the film as an ally to Venom, Spider-Man 3 picks up again and it’s clear where the story’s heart is. Despite some wonky fight scenes, the film’s closing reconciliations between Peter, Harry, and Mary Jane are touching, none more so than Marko’s tearful admittance of his crimes, and how Uncle Ben’s death has haunted him as long as it has Peter. “I didn’t choose to be this,” Marko reflects, and Peter’s paused apology is a profound moment in a film that’s so often dismissed entirely as “the one with the emo dancing.”

The comic book character of Sandman isn’t a particularly mature one. Compared to the more Shakespearean members of Spider-Man’s rogue’s gallery, Sandman tends to be depicted as a simple bank robber. Raimi and Church elevated the character and created a memorable villain who presents serious moral quandaries and has an engaging arc of his own. While Spider-Man 3 certainly isn’t one of the best of the webslinger’s movies, Sandman ranks among his most compelling antagonists.

KEEP READING: The ‘Spider-Man: No Way Home’ Trailer Feels Like ‘Ready Player One’ (This Is Not a Good Thing)

If he’s escaped prison, he certainly looks the part.