Vikings: How Every Main Character’s Death Compares To Real Life 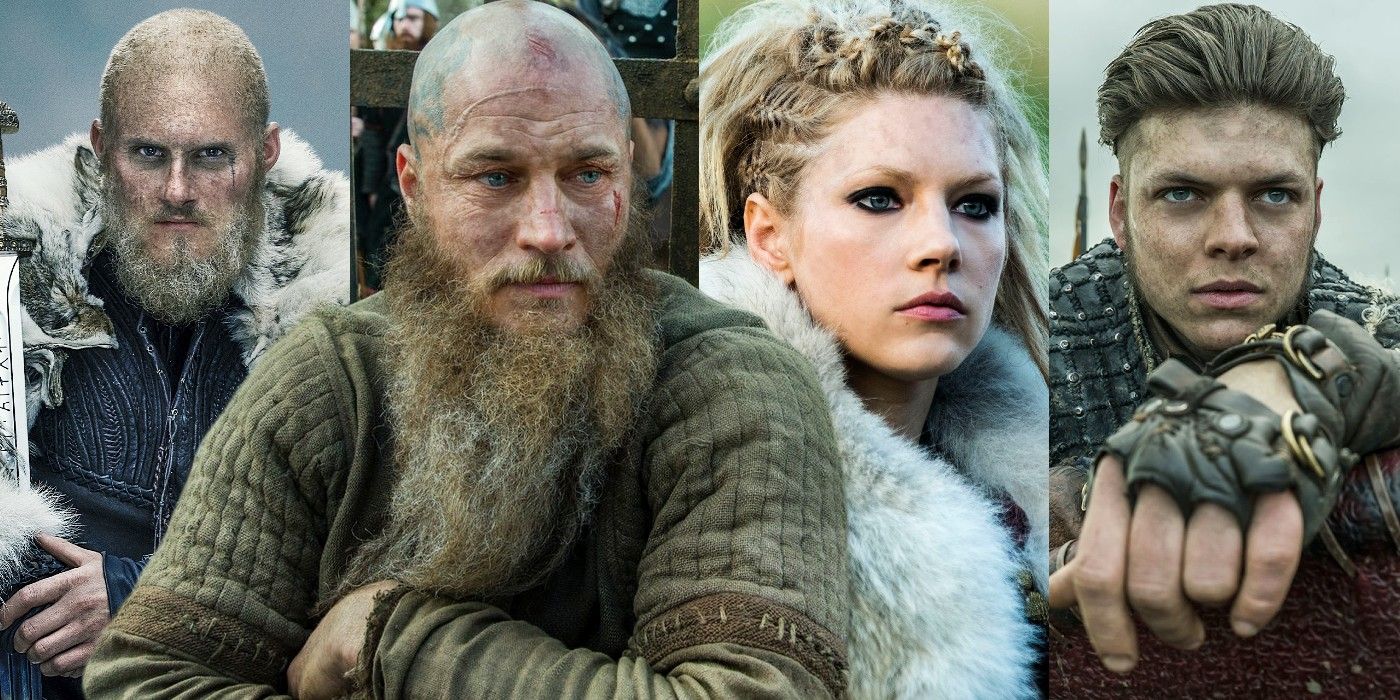 The historical drama Vikings has come to an end after six seasons and a lot of betrayals, battles, and deaths, and not all main characters made it to the final episode – and here’s how their deaths compare to what happened to them in real life or according to legends. Created by Michael Hirst, Vikings debuted on History Channel in 2013, and even though it was originally planned to be a miniseries, it was quickly renewed for a second season, allowing viewers to continue following the stories of Ragnar, Lagertha, Rollo, Floki, and other notable figures from the Viking Age.

Vikings initially followed Ragnar Lothbrok (Travis Fimmel), a legendary Norse figure who is said to have been one of the greatest Vikings to ever live, yet his existence continues to be debated by historians. As the series progressed, it shifted its focus to Ragnar’s sons and their own travels, with special attention to the arcs of Björn Ironside (Alexander Ludwig) and Ivar the Boneless (Alex Høgh Andersen), making them the protagonists even before Ragnar’s death in season 4. Luckily for Vikings fans, season 6 gave closure to the arcs of the remaining main characters, but not all of them made it out alive, and some didn’t even reach the final season.

Vikings saw a lot of betrayals and battles from the beginning, and some of its main characters died in battle, thus earning their place in Valhalla (a majestic and enormous hall in Asgard where those who die in battle go to, equivalent to the afterlife) while others were captured, tortured, and killed, and some others died in unexpected circumstances. Now, although Vikings aimed to be as historically accurate as possible, there are not many historical records on many of the characters (and some might be entirely fictional), so the writers had to take a lot of creative liberties, and in most cases, their deaths didn’t match those of their real-life counterparts. Here’s how the deaths of the main characters’ in Vikings compare to real-life.

Although Ragnar was the lead of Vikings in its first seasons, he might have not been a real person. As mentioned above, there aren’t many historical records that can support the existence of many characters, among those Ragnar Lothbrok. It’s believed, then, that the figure of Ragnar is based on three different men: Viking leader Reginherus, King Horik I of Denmark (who was included in the series), and King Regindfried. Back to the series, Ragnar died in season 4’s episode “All His Angels”, where after King Aelle tortured him and cut a cross into his head, he was thrown into a pit of snakes. Ragnar died as a result of the snake bites, and that was the end of his arc, though some fans still wonder what happened to his body and if he really died in the pit. The sagas in which Ragnar appears state that he was defeated by English forces and thrown into a snake pit, but when taking into account that he might be a combination of historical figures, then the “real” Ragnar could have died in different ways: murdered (like Reginherus), killed in battle (Horik), or in an attempted invasion (Reginfrid).

Lagertha (Katheryn Winnick) was a shield-maiden, mother of Björn Ironside and Gyda, the first wife of Ragnar, and one of the most popular and beloved characters in Vikings, whose death came as a big surprise for the audience. Lagertha appears in Saxo’s Deeds of the Danes alongside Ragnar, so her existence is still debated, with modern historians explaining she might be a reflection of tales about Viking warrior women or the Norse deity Thorgerd, though she could also be a representation of the valkyries, female figures who choose who of those who died in battle will be taken to Valhalla. In Vikings, Lagertha was killed in season 6’s episode “Death and the Serpent”, where she rode back to Kattegat after killing White Hair and sustaining serious injuries. Once there, she arrived at Hvitserk’s home, but he was in a state of delirium and hallucinated a serpent he believed to be Ivar, and so he stabbed it, but he actually stabbed Lagertha. Given that it’s unclear if Lagertha was a real person or not, there are no accounts of how the real one could have died.

It’s worth noting that there was an Icelandic woman named Thorgerd Egilsdottir who appears in several Icelandic sagas alongside characters seen in Vikings, such as Helga (Floki’s wife, played by Maude Hirst) and Torstein (Jefferson Hall), but there are no details on her death. On the other hand, the goddess Thorgerd Holgabrudr is considered an example of a guardian goddess and has been compared to the valkyries, but the tales don’t offer any clues on how the “real” Lagertha could have died, so unlike Ragnar’s case, there are no real or mythological characters that can hint at what happened to Lagertha.

Björn Ironside was Ragnar and Lagertha’s son, who spent a big part of his time in Vikings in constant conflict with his half-brother Ivar the Boneless. Unlike Ragnar and Lagertha, Björn Ironside is one of the few characters in the series based on a real-life Viking chief. The real Björn was a legendary Swedish king and the first ruler of the Munsö dynasty, and the touch of fantasy in his story comes from the Scandinavian legends that say he was the son of Ragnar and Aslaug (yes, Aslaug). Björn (whose nickname “Ironside” in the sagas originated from killing several enemies in battle without hurting himself and “gained from the strength of his sides, which were like iron”) died in Vikings season 6 after being stabbed by Ivar with a sword, though he didn’t die on the spot and managed to pull one final trick on his enemies. However, Björn’s wounds were so severe he eventually passed away, but his legacy continued until the final episode of Vikings. As for the real Björn Ironside, there are no records on how he died, so it’s assumed that he either died of old age or illness, but he definitely had a more peaceful death than his fictional counterpart.

Related: Who Is Bjorn’s Real Father On Vikings? Why It’s Probably Rollo (Not Ragnar)

One of Vikings‘ most feared and hated characters was Ragnar and Aslaug’s youngest son Ivar the Boneless, who for a long time believed himself to be a God, but that was obviously not true and he died in season 6. Ivar the Boneless had one of the most complex stories in the series, and his life was marked by hardships from the beginning. Ivar was born with weak bones, his legs twisted and presumed broken, and was in a lot of pain, with the mysterious Harbard being the only one who could ease his pain. Ivar grew up to become a ruthless warrior and a feared enemy, who was in constant conflict with his brother Björn. Jumping to Vikings season 6, after seeing his brother Hvitserk exhausted and injured during a battle, he stepped in so his brother could stand back and survive. Hvitserk pointed out that Ivar’s eyes were blue, meaning that he was in great danger of breaking his bones. Ivar urged his warriors to continue fighting, then turned around and found a young man with a dagger. Ivar told him not to be afraid, and so the young man stabbed Ivar multiple times, killing him on the spot. Ivar the Boneless, just like Björn, is based on a real person, considered one of the greatest Viking leaders and who was also born with weak bones – but when it comes to how he died, there are different versions of the events. Some claim he died due to a sudden and horrible disease (it’s unknown if it could have been related to his condition), but a mass grave discovered in England might point at Ivar actually dying in battle, just like in Vikings.

Kattegat’s prankster, exceptional boatbuilder, and Ragnar’s best friend Floki (Gustaf Skarsgård) is also based on a real person: Hrafna-Flóki Vilgerðarson, the first Norseman to intentionally sail to Iceland. In Vikings, Floki was believed to be dead after he got trapped inside a cave that was inside a volcano, which erupted while he was there (and where he found a Christian cross, when he believed the cave was a gate to Helheim), but much to the relief of the audience, he returned in the second part of Vikings season 6. Floki was implied to have become senile, but he still managed to share some wise words with Ubbe (Jordan Patrick Smith) in the series finale. Floki didn’t die on the show, but the real one is believed to have returned to Norway, then went back to Iceland where he lived until his death, so Vikings’ Floki might have had a similar fate.