‘Venom: Let There Be Carnage’ – We Must Discuss Cletus Kasady’s Outfit 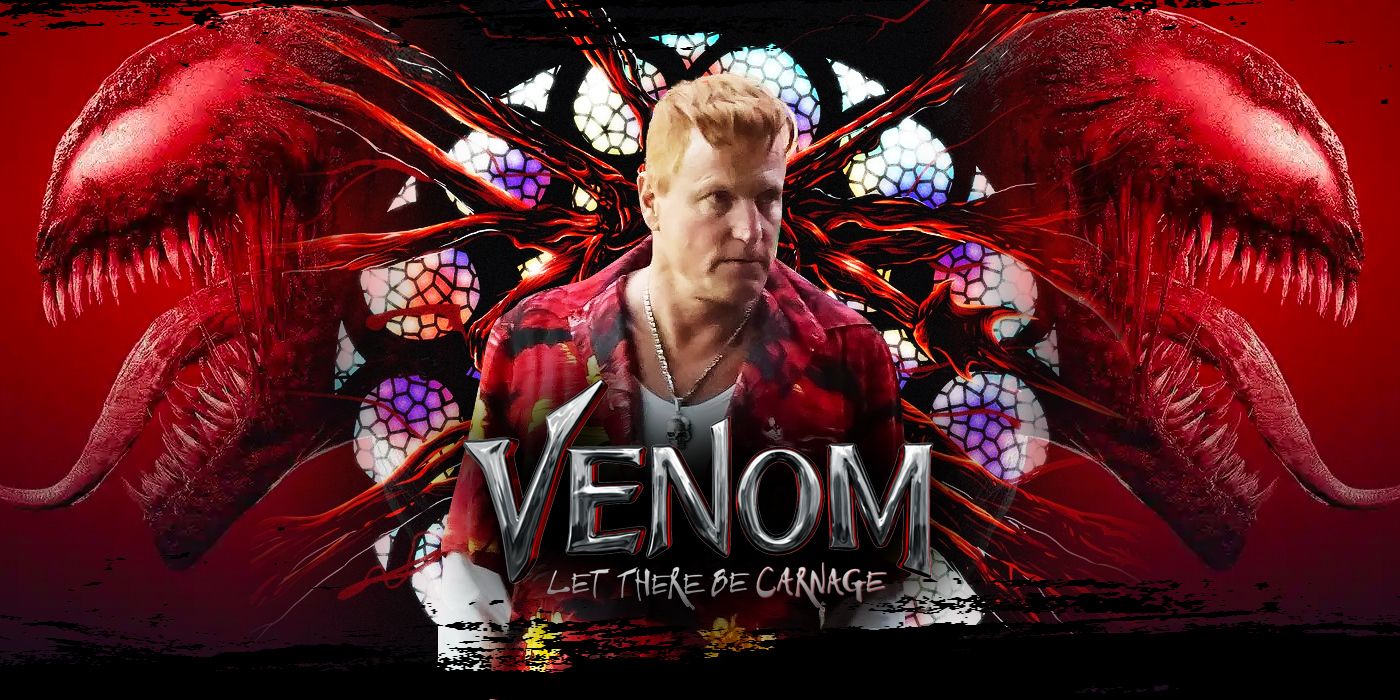 Venom: Let There Be Carnage, the only movie outside of the Planet of the Apes series to have squeezed cinematic lemonade from a cumbersome title, is the superhero sequel this world needed. Now on, demanded. A breezy 90-minute romp following Eddie Brock (Tom Hardy, arguing with himself for our amusement) as he squabbles with his alien bestie Venom while simultaneously tracking the dangerous serial killer Cletus Kasady (Woody Harrelson), Venom 2 is just as delicious a bowl of schlock pudding as its predecessor. The movie so swiftly delivers on its promise that it’s almost immune to discussion, because indeed what is there left to say after an hour and a half of hooting, “Wooo yeah! There’s Carnage! They let there be Carnage! Woooooo Carnaaaaaage!”

But there is something I desperately need to discuss about this film. Really, it’s the only aspect of the movie I ever care to talk about now that Venom: Let There Be Carnage has replaced high school as the communal American experience. And that is the outfit Cletus Kasady selects for himself after bonding with the Carnage symbiote and busting out of prison.

RELATED: ‘Venom: Let There Be Carnage’ Almost Had a Joy Division-Inspired Title That Is, Somehow, Even Better

Cletus dresses like an e-cigarette who wished to be a real boy. He looks like he shoplifts exclusively from Gadzooks, but only the stores with several letters burnt out in the sign. If you asked Cletus Kasady where he got his cool Smash Mouth costume, he would confidently respond, “Gadoos.” He looks like Guy Fieri’s reenactment actor. He looks like a person of interest in a Netflix true crime documentary. He’s dressed like a door-to-door throwing star salesman. You can almost smell the patchouli oil wafting through the screen, and I didn’t even opt for the 4D experience.

What’s striking about this outfit, apart from the fact that the centerpiece is a hot rod button-down that you would find in abundance at an anime convention and/or a Floridian gun show, is the fact that we see him steal it from some hapless drip in an alley. Another person was wearing those clothes, on purpose. This anonymous person just so happened to adopt the same fashion sense as a sixty-year-old death row inmate recently boosted from the clink by a fleshy alien bodysuit with T-1000 knife powers.

Now, this provokes a supplemental question – Was this nameless man, out on the town for a night of smoking cloves while haunting a newsstand and reading magazines he has no intention of paying for, the first person that Cletus saw? Or did he browse around for a while? Cletus is on the run, and although his new Carnage powers mean that he’s in absolutely no danger even if the cops do catch up to him, he’s still trying to maintain a reasonably low profile until he can free his girlfriend Shriek (Naomie Harris) from metahuman jail. So, you could be excused for assuming that this hibiscus-bedazzled trailblazer just happened to present the first good opportunity for Cletus to steal some civilian clothes and blend in.

But then, Cletus’ haircut grabs you by the throat and slaps you in the face while screaming the truth of your foolishness into the heavens, where Venom is from. You see, after sporting a truly fantastic curly wig in the post credits scene of the previous film, Cletus initially appears in Venom: Let There Be Carnage with a fairly subdued haircut. He’s in jail for killing, I dunno, a billion people (the film is never clear on his exact number of victims, but continuously reminds us that there are likely scores of undiscovered bodies still out there), so they probably limit his contact with barber shears to a basic trim with safety clippers every few weeks.

However, when we see him pulling his new clothes off his headless victim, he’s already sporting a righteous new hairdo. This fanciful haircut is best described as a coward’s mullet, or if Joe Dirt tried to get a devilock in 1999 but accidentally brought in a picture of a Street Fighter character as a reference image. But the important detail to notice here is that he already has the haircut, which means he got it while still wearing his San Quentin prison romper. The haircut was Priority One; ditching his fugitive attire was secondary. This means that Cletus’ personal sense of style took precedence over all other considerations, which is another way of saying, “He cruised around San Francisco until he spotted someone dressed like a specific genre of asshole.”

Who knows how many perfectly good polo shirts and Giants jerseys he passed up until he found the exact combination of chains, tropcial sunsets, and Doc Martens that spoke to him? And more importantly, who cut his hair? Did Cletus stroll into a barber shop in his bloodstained death row overalls? Did he pinch some clippers from a corner store? Or did he have Carnage use his formidable shapeshifting abilities to form a pair of scissors? Either way, with his new haircut and duds now in place, Cletus decides to shove his prison clothes onto the headless body of a guy who dressed like a bowling coach for his last night on earth. Why? To throw the cops off his trail, I suppose. Would the police somehow confuse this dead person in ill-fitting coveralls with an infamous serial killer who, as far as they know, busted out of prison by making a pact with the devil? Or maybe Cletus simply believes in the barter system and didn’t want to leave this headless man clothesless.

Later in the film, Cletus shows up to his wedding sporting the exact same outfit in tuxedo black. Did he go and get it custom made? Did he dye his “dangerous TGI Friday’s” shirt because he thought it was more respectful of the occasion? Or did Carnage metamorphosize some dapper middle school attire so his pal Cletus could get hitched? Ultimately it seems Cletus was infinitely more concerned with looking dope as shit than he was with wreaking havoc or marrying his murderous sweetheart. This is the brand of chaos you invite when you let there be Carnage. While we may never fully unravel the mystery behind Cletus’ bold wardrobe, the world is an undeniably better place for it.

KEEP READING: ‘Venom: Let There Be Carnage’ and Why More Blockbusters Should Embrace the 90-Minute Runtime

Tom Reimann is a writer and comedian and somehow an Associate Editor at Collider. He has written for Cracked.com, Mad Magazine, BunnyEars.com, and Some More News, and is the co-founder of the Gamefully Unemployed podcast network.