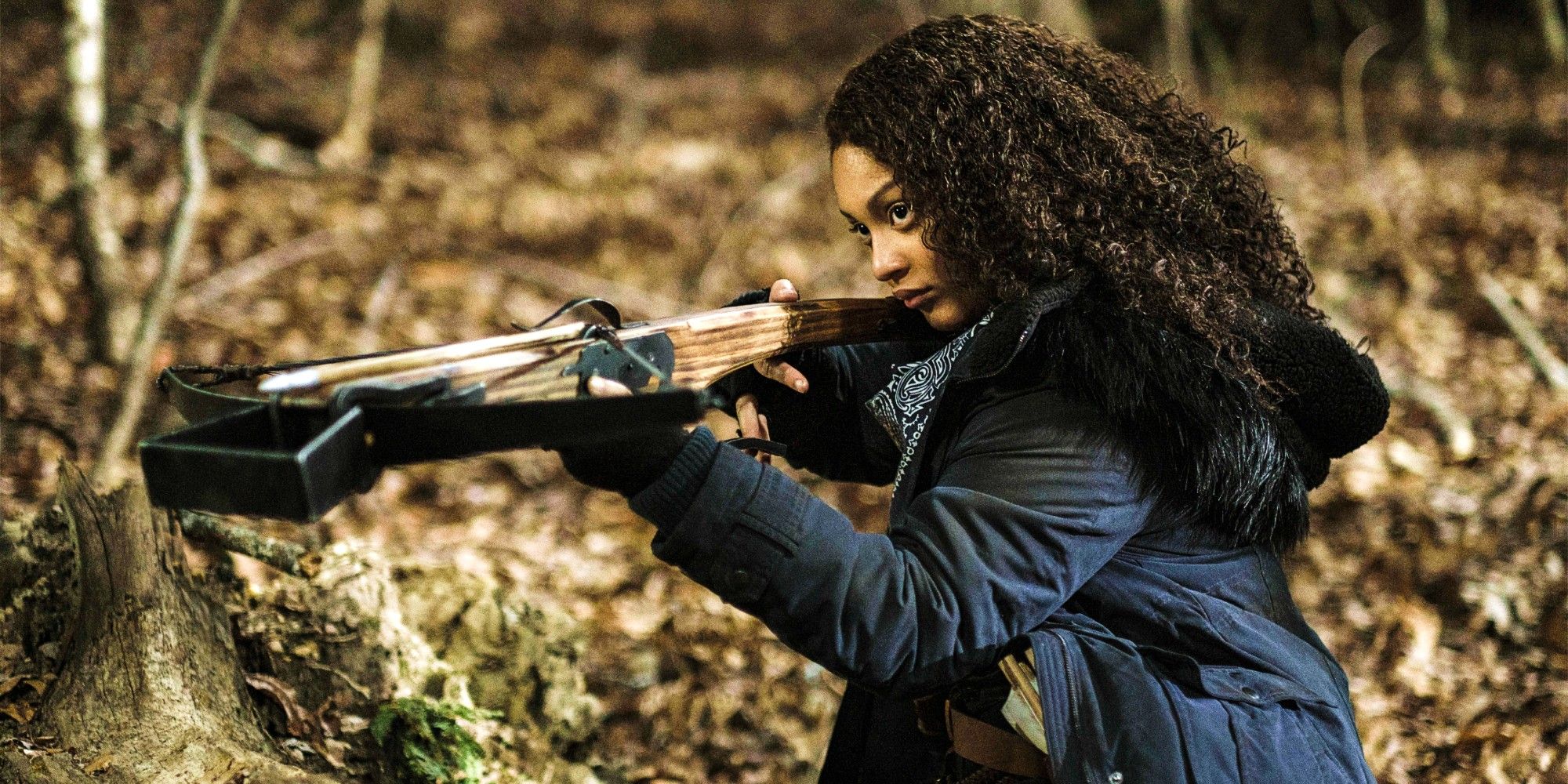 Iris makes a really rash decision in The Walking Dead: World Beyond season 2 premiere and it’s sure to have big consequences for the show’s future.

Warning! SPOILERS ahead for The Walking Dead: World Beyond season 2 premiere.

The Walking Dead: World Beyond season 2 is kicking things up a notch by having Iris kill a CRM soldier, and the fallout from this kill could have big consequences going forward. World Beyond is the second spinoff show to the original Walking Dead series and it introduces a whole new cast of apocalyptic survivors. What makes this show’s cast different, however, is that the majority are young teens who’ve lived in a sheltered community since near the start of the outbreak. World Beyond season 1 has them venture into the “real world” for the first time, and it opens their eyes to not just the hardships of post-apocalypse life but to the truth about the Civic Republic.

The impetus for their journey out into the world is a message Hope and Iris receive from their father, who works for the Civic Republic, warning them he’s in danger. World Beyond season 1 eventually reveals the message didn’t come from their father but from Huck, a CRM security officer who followed after them. Turns out, the fake message was all a part of the Civic Republic’s plan to lure Hope, a certifiable genius, away from Campus Colony before it was destroyed (and by the CRM, no less). What they didn’t bank on was Hope being joined by her sister, Iris, and two more wayward teens, Elton and Silas. Though the CRM does manage to secure Hope by the end of World Beyond season 1, they now also have Iris to contend with, and she isn’t simply going to let them take her sister without a fight.

Related: World Beyond Ruins Its Story By Repeating The Walking Dead & Fear

In The Walking Dead: World Beyond season 2 premiere, “Konsekans,” Iris learns of Campus Colony’s grisly fate. She doesn’t know for sure that the CRM is responsible for sending the column of empties that destroyed her home, but she has her suspicions given how Will explains the CRM is trying to cover up what happened to Campus Colony and Omaha. Rather than get proof, though, Iris sneaks off in the middle of the night to scout around a nearby CRM facility. She comes across a CRM soldier on patrol and kills him, unprovoked. It’s a chilling scene and one that will no doubt come with consequences. If there was any doubt, note that the episode’s title, “Konsekans,” is a Haitian Creole word that translates as “consequences.”

In the most immediate sense, Iris killing a CRM soldier in cold blood could get her, Felix, and Will kicked out of the new community they’ve taken refuge in, the Perimeter. This settlement has a tenuous truce with the Civic Republic where in exchange for clearing out the empties in the surrounding area, the CRM provides them with supplies. Now, when one of their soldiers comes up missing and is found murdered, the CRM is likely to look at the Perimeter first. Will even makes a point of how the Perimeter is taking a big risk by sheltering them, and Iris’ rash actions in the World Beyond season 2 premiere could very easily have screwed everything up.

In the long term, though, Iris’ decision to kill a CRM soldier is a sign she’s becoming more reckless and unpredictable. Not to mention, it’s a big change from the Iris who struggled to put down empties in season 1. Clearly, the Civic Republic’s kidnapping of her father and sister is weighing heavily on her, and now she believes the CRM wants her dead, which is only going to make her more hostile towards them. The Walking Dead: World Beyond season 1 has already explored how killing another person has a lasting effect in its plot about Hope killing Elton’s mother during the outbreak’s early days. And that was an accidental killing done in self-defense. Iris, in her grief and anger, has murdered an innocent soldier who posed no immediate threat to her. This is a dark turn for her character, and it could lead her on a path to where Iris becomes unrecognizable to the family she’s trying to rescue.

Next: Walking Dead’s Civic Republic Reveal Should’ve Been In The Main Show