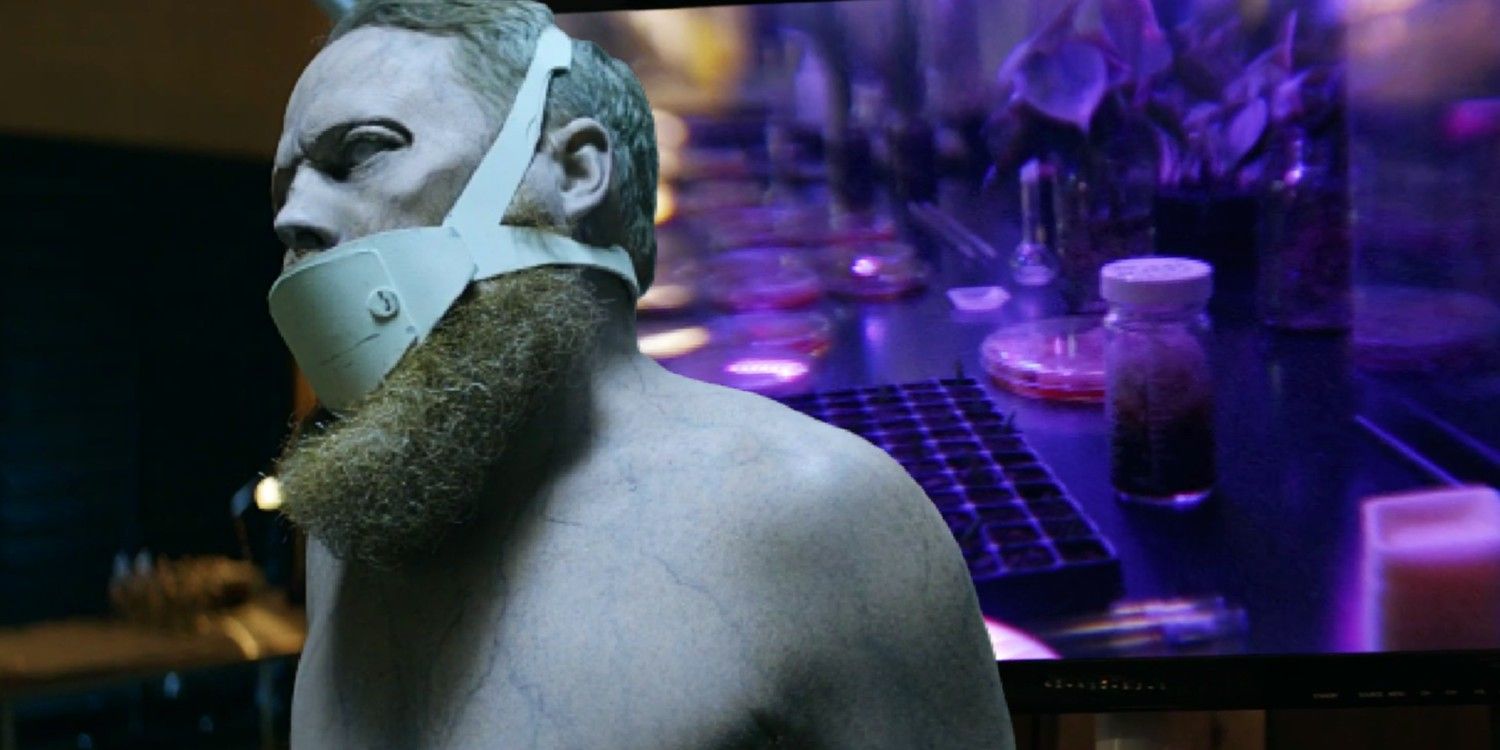 Warning! SPOILERS ahead for The Walking Dead: World Beyond season 2 episode 2.

In The Walking Dead: World Beyond, the Civic Republic is mainly viewed as an antagonist through the eyes of Iris and Hope Bennett, two teens who believe their father, Dr. Leo Bennett, is a captive of the CRM and leave their community to go in search of him. Though they’re wrong about their father, they aren’t necessarily wrong about the CRM as it’s revealed in World Beyond season 2 that they are responsible for the massacres at Omaha, Campus Colony, and possibly other communities like Portland.

Related: The Walking Dead Proves The CRM Is Worse Than You Thought

While the actions of the CRM at Campus Colony and elsewhere are reprehensible, the ultimate goal of the Civic Republic is a good one – rebuilding civilization. The surest way of achieving this is to develop a cure and rid the world of the zombies who already exist. Now, in The Walking Dead: World Beyond season 2, episode 2 “Foothold,” Hope is learning first hand while at the Civic Republic’s research center how they’re trying to achieve their goal. Meanwhile, Silas is also learning how the CRM plans to eradicate the walkers currently roaming across the country.

The CRM Has Decontamination Centers

Having surrendered to the CRM in World Beyond‘s season 1 finale, Silas finds himself taken to a CRM facility where walkers are collected and destroyed. These facilities are referred to as decontamination centers. Their purpose is to lure walkers in with noise and lights, then dispose of them in a mass culling. They’ll initially use explosive devices to destroy the majority of the walkers, but afterwards a team of workers will work through the piles of bodies and put down any that are still moving. The destroyed dead are then loaded up on trucks a shipped somewhere offsite to be disposed of.

The CRM runs six additional decontamination centers across the state of New York, primarily using stadiums and arenas since they’re larger in size than the facility Silas has been stationed at. The purpose of these centers is to kill all the zombies in New York, and once they’ve been eradicated, the CRM can secure the state. This would allow the Civic Republic to begin developing energy, agriculture, and commerce on a much larger scale. In effect, a whole state clear of walkers would be a foothold for civilization and a chance to start over.

The Civic Republic Is Researching Why People Become Walkers

World Beyond season 2, episode 2 “Foothold” also sees Hope given a tour of the Civic Republic’s research facility by Dr. Lyla Belshaw. On her tour she learns a great deal about their research and it opens Hope’s eyes to what the Civic Republic is actually trying to achieve: a cure. In order to develop a cure, however, they first need to learn what causes the change to zombies in the first place. The Walking Dead has already established that anyone who dies, be it by a walker bite or not, will turn into a zombie soon after death, but exactly why that is remains unknown. It’s clearly a pathogen of some kind and one that has infected all human beings, but the Civic Republic is trying to discover whether it’s fungal, bacterial, viral, or something else entirely. After all, pinpointing why people turn is key to preventing them from turning in the first place.

How Walkers In TWD Can Survive For So Long

But that’s not all the Civic Republic scientists are studying. They’re also looking into what is keeping the dead animated, what slows down their decay, and what is feeding their appetite. For all intents and purposes, walkers are dead bodies, but something about them has changed because of this unknown zombie pathogen. If the Civic Republic’s scientists can learn what is enabling these functions to continue after death, they could potentially turn off those triggers and eliminate the dead from being a threat at all.

One way they’re studying walkers is by affixing them with a biorecorder. These devices are fused to a walker’s brain stem and it allows the Civic Republic’s scientists to record the biological responses walkers have to different environmental stimuli. It also allows the walkers to be tracked, similar to the tagging of wild animals. As Leo explains in the video presentation, these biorecorders are allowing them to study a walker’s brain chemistry, their speed and pursuit behavior, as well as the effects different weather has on them.

It’s unclear how many of these tagged walkers the Civic Republic currently has, but one can be seen at the decontamination facility. This walker is referred to by a code name, B-04, and its biorecorder has a dead battery. It was collected during their most recent culling, and it’s soon loaded up and taken back to the research facility. Whether the “B” designation is at all related to the CRM’s “A” and “B” labeling is unclear, but as other test subjects are labeled “A,” it isn’t impossible that becoming these biorecorder walkers is what happens to those labeled “B.”

Along with the biorecorder, Leo also reveals he’s been studying the effect fungi that grows on necrotic flesh can have on walkers. The thinking here is that with the right modifications, the dead could be infected with a fungus that will speed up the rate of decay. If this were to happen, then the zombies would be a less dangerous problem, essentially neutralized as a mobile threat. Were this to happen, those that exist already could be quickly eradicated, while the newly dead wouldn’t even have a chance to become walkers in the first place. It’s also mentioned earlier on by Lyla that the very pathogen which is turning deceased humans into zombies could be fungal in origin, so the very cure itself could also be found in Leo’s research.

While Leo is working with fungi, Lyla has a pet project of her own: studying humans as they turn into zombies. It was revealed in World Beyond season 1 that Lyla’s research involves the recently turned when she’s seen studying her former colleague, Dr. Samuel Abbot of Portland. It isn’t said how he died, but since Leo is still concerned over his disappearance, his death is at the very least suspicious. Now, however, there’s more evidence his death was deliberate for the sake of Lyla’s study.

In a discussion with Kublek that is very much for their ears only, Lyla asks when she will receive her next “premortem.” This terminology, “premortem,” refers to someone who is not yet deceased but is likely near death. That implies Lyla’s research isn’t just about studying zombies, but studying people as they turn into zombies. It’s again not clear what is the eventual cause of death for her test subjects, but given the secrecy over Dr. Abbot’s death and the fact Lyla is receiving living test subjects, it isn’t out of the question to think part of her research also involves a person being bitten. After all, this would allow her to study the effects of the infection as it sets in as well as the changes a human body goes through as it dies and becomes reanimated.

The CRM is Recruiting the Smartest Survivors

Given all the research currently taking place at the Civic Republic’s facility, it’s pretty obvious that one of the CRM’s goals is to recruit the smartest survivors they encounter to come and work there. That’s why Leo is there and it’s why they went to great lengths to bring Hope there. What’s unclear is if the CRM used the same level of manipulation to bring in anyone else, or if the Bennett family is a special case. Leo, for instance, did crack the biorecorder in just two months when the other scientists had been working at it for years, and they believe Hope is a prodigy-level genius.

Regardless, the Civic Republic research facility is host to many bright people, like the young man on his way to study group who Hope meets while she’s attempting to sneak around. Lyla mentions to Hope that, in addition to conducting her own research, she will teach others what she’s learned, passing on her knowledge. In this way, the Civi Republic research facility in The Walking Dead: World Beyond is kind of like a school where everyone is either teaching or studying what they think might lead to a cure.