The Vampire Diaries: Each Season Ranked, According To The Rotten Tomatoes Tomatometer 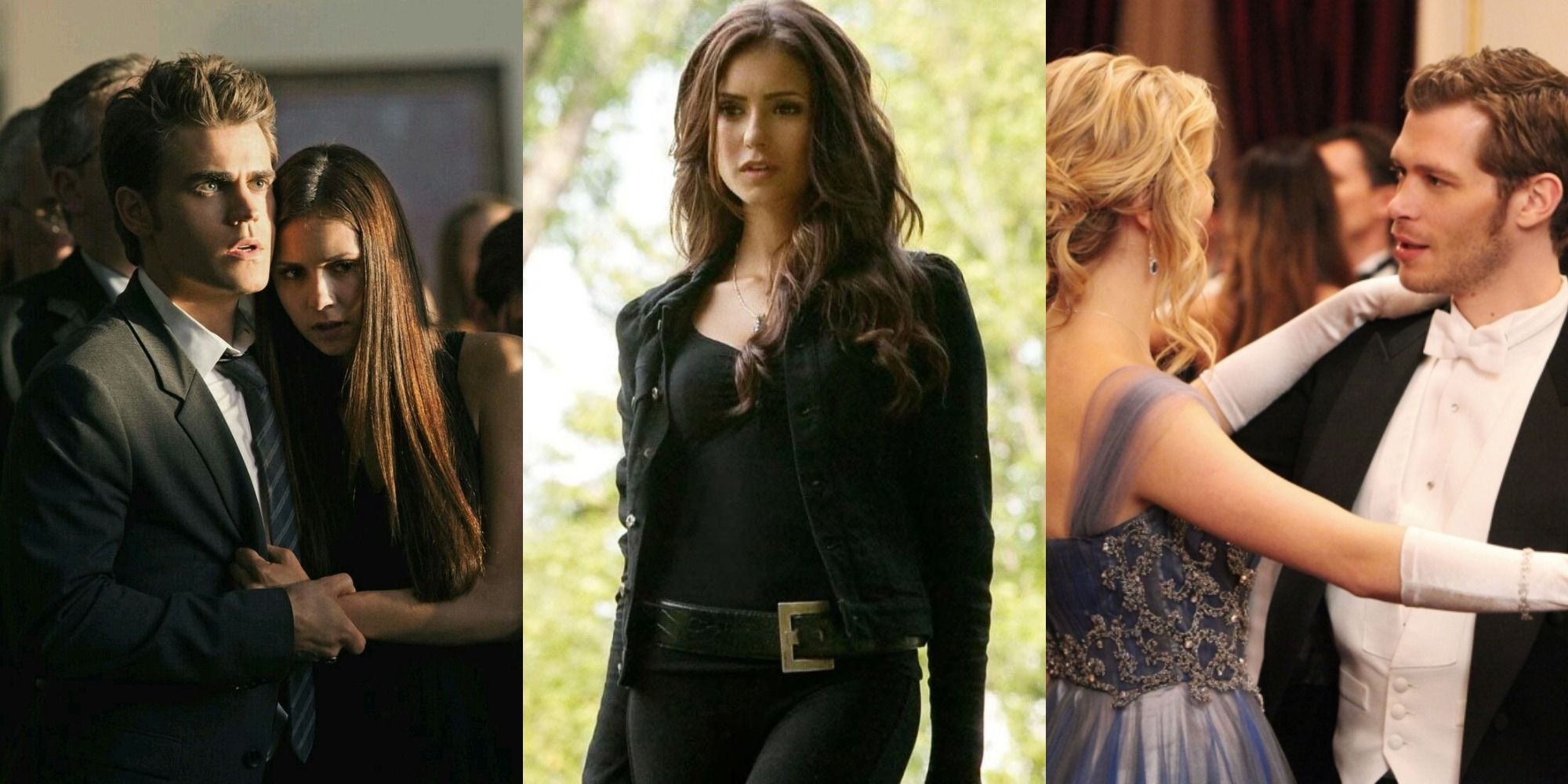 The CW’s The Vampire Diaries began with the premise of Stefan and Damon Salvatore returning to their hometown, Mystic Falls. At first, the biggest threat was the war raging against the Founders determined to remove vampires from their town, and the vampires wishing revenge. Later, the series expanded beyond that and The Vampire Diaries began turning each of their central characters into the supernatural until Matt Donovan was the only human left on the series. Otherwise, nearly everyone else was a witch, vampire, or werewolf.

RELATED: 10 Unanswered Questions We Still Have About Stefan Salvatore

Loyalties were constantly strengthening or changing as villains changed each season. Over time, those seasons were met with somewhat mixed results as though almost all of them were considered strong, some were seen to be far superior to others, including when looking at the scores on Rotten Tomatoes.

Updated on September 4th, 2021 by Kevin Pantoja: The Vampire Diaries is an interesting show in that it remains almost as popular as ever several years after the series actually wrapped up. New fans find it on streaming services like Netflix while loyal fans from day one spend a lot of time watching the episodes over and over again. That makes it intriguing to see if the reviews on The Vampire Diaries seasons fluctuate over time, especially with major critics on Rotten Tomatoes.

The Vampire Diaries earned their audience with well-written characters and several major plot twists. Each character had a relevant story arc, character development, and growth. From vampires and werewolves to various types of witches, the Mystic Falls gang never had it simple. Still, they always dedicated themselves to removing the threat from their hometown and protecting their friends.

The Vampire Diaries never shied away from killing off characters, and eventually, fans would get used to watching their favorites die just to come back to life later. It kept the series fresh even when things seemed like they were about to go downhill.

A shocking plot twist in the season 3 finale finally made Elena Gilbert a vampire in season 4. Elena’s desire to be human again sends the gang on a journey to find the cure for vampirism. The storyline also focuses on Silas, an immortal witch who wanted to die. Among the problems also includes Elena’s sire bond to Damon and the continuing underlying question regarding the central love triangle. Season 4 also stresses a shocking ending, with Bonnie’s death and Silas’ true form revealed.

RELATED: The Worst Thing About Each Main Character From The Vampire Diaries

Season 4 is also the last that the Mikaelsons are heavily included, as they leave Mystic Falls for New Orleans to begin The Originals. That was where some of the issues began as the show struggled to rebound from the Mikaelsons since they were so intriguing and other villains couldn’t quite live up to them.

The Vampire Diaries used its first season to explain the backstory behind Stefan, Damon, and Katherine. Damon was the central antagonist in season 1, dedicated to rescuing Katherine from the tomb.

In his drive, Damon was impatient, and while his interest in Elena was clear, Damon was also using Caroline whenever he pleased. Stefan and Damon’s arrival in Mystic Falls was the catalyst that created the chaos in Mystic Falls afterward. Season 1 of The Vampire Diaries defined each character, allowing the series to be a hit out of the gate. Alas, there were a few episodes early on that were a case of the show not totally having its footing.

To do so, season 7 featured a time jump, proving how severe Elena’s magical coma state was, and the stakes involved with her situation. It also featured the storyline revealing that Alaric and Jo’s babies had survived Kai’s attack, as they had been transferred into Caroline. It also included the long-awaited reunion between Stefan and Klaus during “Moonlight on the Bayou,” the first half of the crossover between The Vampire Diaries and The Originals.

Stuck in a prison world, Damon and Bonnie unleashed havoc when Kai Parker escaped with them. As a witch sociopath, Kai wished to kill his family to take control of the Gemini Coven. Not only was he powerful but he was also one of the show’s best villains and a serious threat who made a major impact. Kai’s parting gift before dying left Bonnie and Elena’s lives linked together, making only one allowed to live at a time.

RELATED: 10 Most Powerful Witches In The Vampire Diaries Universe

Season 6 is also the first time Caroline turned off her humanity after the death of her mother, forcing Stefan to as well. Damon and Stefan’s mother also arrived, as she didn’t die the way her sons believed. Her place on the show counted as one of the season’s antagonists and introduced the first Heretics. Though the show was losing Elena, it had a strong season here.

Season 3 is the first that viewers got a front-row seat to the worst side of Stefan. Forced to turn off his humanity and leave Mystic Falls with Klaus, Stefan goes on Klaus’ journey to create more hybrids. As Damon and Elena search for Stefan, they do not find the person they knew. Instead, without his humanity, Stefan is a much darker person.

Season 3 especially cemented the love triangle as Stefan is out of the picture, leaving Elena alone with Damon to have her feelings truly grow. This was also the first to introduce Rebekah Mikaelson and the rest of the original family, who were among the show’s best characters.

The first season to utilize Katherine as a central antagonist, season 2 makes the stakes higher for the main characters. Katherine took pleasure in making life challenging for Elena, Stefan, and Damon, always being a few steps ahead of them. However, it was Katherine’s secrets that kept season 2 interesting. Katherine was doing things for Klaus to gain her freedom after running from the Original Hybrid for 500 years.

Another major storyline throughout season 2 includes the reveal that Tyler Lockwood has the werewolf gene, as do his paternal family members. Yet, the most significant change for any main character was Caroline’s transition into a vampire, which made her into one of the best characters. This season was great since it kept viewers guessing at an impressive level with fast-moving storylines.

The truth about Elena and Katherine as doppelgängers is finally explained by Qetsiyah, a powerful witch from Ancient Greece. Elena was also not the only one with doppelgängers, as season 4 revealed that Silas’ pure form is the original body and face of Stefan. Silas finally got his wish and died with Amara, but Stefan did not get the satisfaction he thought would come from killing the man that trapped him in a safe underwater for three months.

Yet, the season’s most significant obstacle is the collapse of The Other Side, which would take Bonnie and Damon with it. This season also worked for having the historic 100th episode, which saw fan favorites return, Caroline and Klaus hook up, and the emotional final moments for Katherine. At least, that’s what it looked like at the time.

The final season brings several storylines to a conclusion. With Cade, leader of Hell being a central villain in the season, everyone tries to defeat him. While Cade does die, he is not the last antagonist of the series. The Vampire Diaries brought back fan-favorite villains as a great way to bring everything full-circle.

However, it all led back to the biggest bad in the series, Katherine Pierce. Eight seasons from the premiere, Katherine was still the worst they ever dealt with, especially since Klaus had mostly become a good guy by this point, and she returned as the leader of Hell. Katherine was ultimately defeated and everyone got a fitting ending by being together and finding peace in the afterlife.

NEXT: 10 Characters From The Vampire Diaries That Deserved Better


Next
Game of Thrones: Every Wedding On The Show, Ranked Least To Most Tragic

Lindsay Press is a freelance writer. As a graduate of SUNY Purchase College with a degree in Screenwriting and Playwriting, Lindsay has loved television shows and movies since childhood. In addition, she loves to create stories and enjoys dystopian futures, teen drama, and fantasy worlds.