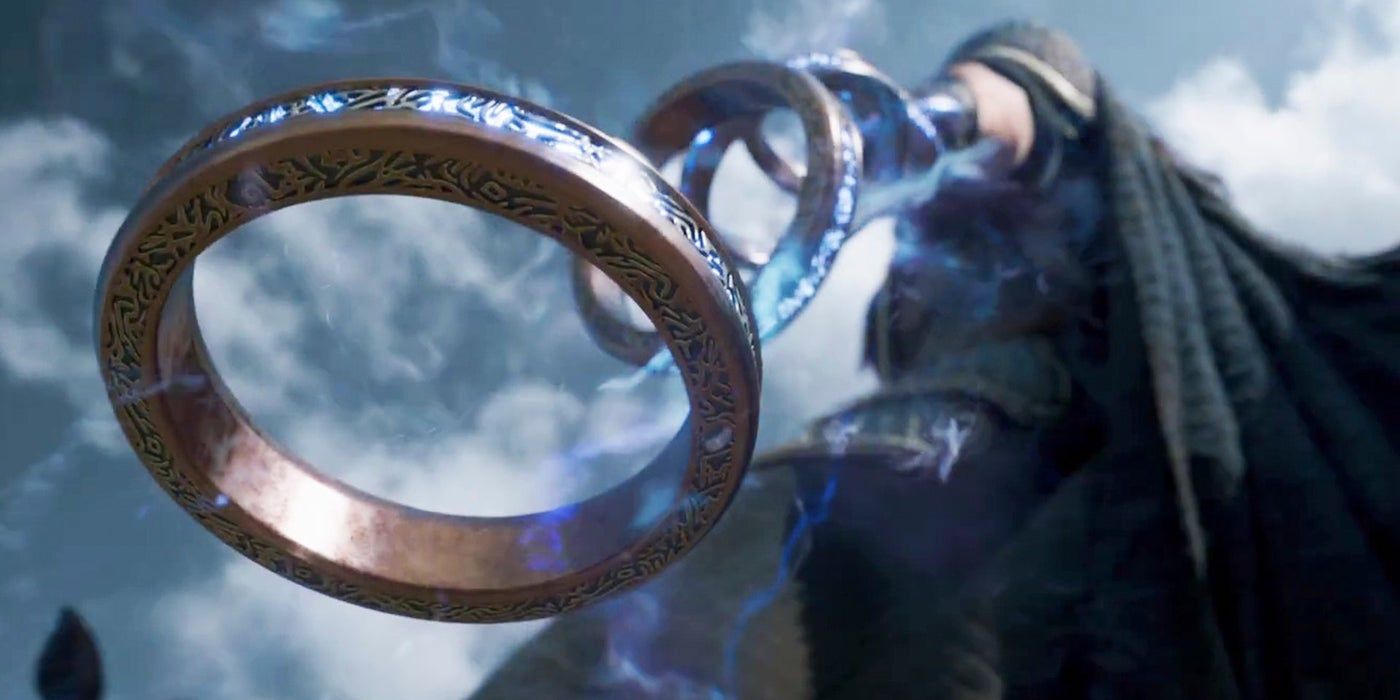 Warning! Major SPOILERS ahead for Marvel’s Shang-Chi and the Legend of the Ten Rings

In Marvel Studios’ Shang-Chi and the Legend of the Ten Rings, the powerful new weapons known as the Ten Rings are introduced with mysterious origins despite having an important role in the MCU’s future. Wielded for thousands of years by Wenwu, the MCU’s true Mandarin (Tony Leung), the Ten Rings are the namesake of his organization as he grew in power. Now, his son Shang-Chi (Simu Liu) has come into his own as a hero, intending to use the Ten Rings as a force for good going forward.

Offering a variety of powers that amplify the wielder’s strength and natural abilities, the origins of the Ten Rings in Marvel comics are rather specific, while the MCU’s depiction is still quite mysterious (for now). After Shang-Chi fought his father, Wenwu realized his error in freeing the monstrous Dweller-in-Darkness he believed was his trapped wife, Jiang Li (Fala Chen). The Mandarin granted the Ten Rings to his son before the creature killed him, allowing Shang-Chi and his allies to save the universe by defeating the massive soul-eater. Furthermore, the rings themselves granted Shang-Chi massive amounts of power, wielding them as the Heart of the Dragon to great effect.

Now, Shang-Chi is still in possession of the Ten Rings by the film’s end, seemingly intending to keep the world safe alongside his friend Katy (Awkwafina). However, it seems as though there’s much more to the powerful weapons than the film reveals. Where did the Ten Rings come from, and what is their significance for the MCU’s future heading into the rest of Phase 4?

In the Marvel comics, the Ten Rings have a pretty clear (if not obscure) origin. While traveling the forbidden Valley of Spirits, the Mandarin found the remains of a crashed starship and dragon-like alien, known as Axonn-Karr, from the planet Maklu IV. Mastering the technology he found within, the Mandarin adapted the ship’s propulsion source to craft the Ten Rings. Each ring offered a different power and ability such as ice, flame, and electricity blasts, mind control, light absorption, disintegration, transmutation, and more while also granting him long life. The Mandarin would then use the Ten Rings in his attempts at world domination, most often going up against Iron Man as he believed technology was the path to achieve his goals.

At the moment, it’s as of yet unclear whether or not each of the rings in the MCU has such unique abilities as the rings in the comics. While Wenwu’s Ten Rings displayed a variety of powers, they operated very much in unison, though perhaps more powers like those seen in the comics could be achieved or unlocked by Shang-Chi in the future as he gets more familiar with the powerful tools. Furthermore, the Ten Rings of the comics have even shown sentience and a form of telepathy, being able to communicate with one another to its wielder. Perhaps this could be a factor in future chapters of the MCU?

Where The Ten Rings Came From In The MCU

According to the stories told to young Shang-Chi about the Mandarin by his mother, legends said that Wenwu either found the Ten Rings in a crater or within a tomb thousands of years ago. While that’s fairly ambiguous, it does hint at the comics’ origins as a crater could have been caused by the crashed Makluan spacecraft. Furthermore, it’s also possible that the tomb could be a reference to the ship itself, seeing as how it became the impromptu grave for the deceased dragon-like alien found by the Mandarin.

That being said, creating said ambiguity as to where the Mandarin found the Ten Rings in the MCU and where they came from allows Marvel Studios to have more creative options down the line. While they could certainly adapt the Ten Rings as being part of the Makluan ship’s technology, it’s not as though Maklu IV is a major location of the Marvel universe in the comics. Instead, it’s more likely that the MCU’s Ten Rings will be tied to something much bigger as part of the grander narrative being told in Phase 4 and beyond.

Why The Ten Rings Are Important For The MCU’s Future

As revealed by Shang-Chi’s after-credits scene, the defeat of the Dweller-in-Darkness using the Ten Rings was a major event that caused a significant impact in the MCU. After being brought to Wong’s library, the sorcerer reveals to Shang-Chi and Katy that the Rings’ power was felt by the Masters of the Mystic Arts in Kamar-Taj, despite the fact that the battle took place in the ancient village of Ta Lo in another dimension. Furthermore, Wong also called Captain Marvel and Dr. Bruce Banner to examine the Ten Rings over hologram.

According to Wong, the Ten Rings don’t match any relics in the archives at Kamar-Taj, while Banner confirms that they aren’t made from vibranium or Chitauri technology. Furthermore, Captain Marvel has no record matches and isn’t able to identify their origins either. Not only that, but they also reveal that the Ten Rings have a beacon inside of them that’s transmitting some sort of signal to someone or something.

Clearly, the Ten Rings are incredibly powerful while raising some pretty big question marks as to where they truly came from. That being said, Shang-Chi has now entered the greater world of the Avengers, and the mysteries of his new weapons will likely be answered sooner rather than later (perhaps even earlier than Shang-Chi 2), especially if something is coming for them. It’s possible that the Ten Rings came from outside the primary MCU universe, having come from another universe in the greater multiverse that’s just begun to be introduced by the MCU, which would explain why they can’t be identified. In any case, it’s pretty evident that the mysterious Ten Rings are a force to be reckoned with, making their new wielder Shang-Chi quite the powerful addition to Earth’s Mightiest Heroes. Shang-Chi and the Legend of the Ten Rings is now playing in theaters.

Kevin Erdmann is one of Screen Rant’s staff writers. With a major in Cinema Studies and a minor in Comics and Cartoon Studies from the UofO, Kevin is pretty sure he’s writing for the right site. While Kevin is a huge Marvel fan, he also loves Batman because he’s Batman and is a firm believer that Han shot first. Disney also shares a big part of his fan patronage. Kevin lives in Oregon with his wonderful wife and sinister cat who is no doubt currently plotting his demise.