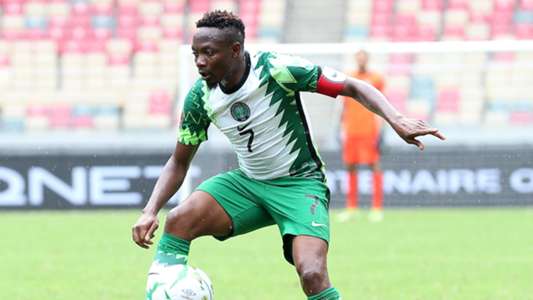 Ahmed Musa is revelling in the pride of making his 100th appearance for Nigeria during the 2-0 win over Central African Republic on Sunday.

The Fatih Karagumruk star became the third Nigerian centurion, moving one short of the Super Eagles’ record cap holders Joseph Yobo and Vincent Enyeama, who have 101 appearances each.

Musa thought he had reached this mark against Cape Verde in September, however, Fifa chalked off his participation against Togo in June 2017 and versus Algeria in November of the same year.

According to the football ruling body, the friendly against the Hawks was not a Fifa-recognised game, while the World Cup qualifier against the Desert Foxes was cancelled as the Super Eagles fielded an ineligible player.

On Sunday, the former Leicester City man was subbed off for Chidera Ejuke as goals from Leon Balogun and Victor Osimhen pegged back the Wild Beasts in Douala.

He revelled in the landmark appearance, publishing a photo on Instagram with the accompanying caption: “Wow! What can I say? I wouldn’t have been able to achieve this without the support of my family, teammates, the officials and my fans.

“To crown it all, important three points in our game. Thank you so much, I don’t take any of this for granted. We will continue to make history and secure wins.”

After representing the country at youth level, the speedy forward made his senior debut on August 5, 2010, in the 2012 Africa Cup of Nations qualifier against Madagascar, coming in as a substitute for ex-Chelsea star John Obi Mikel in the 2-0 win.

“The most important thing is the three points, and I will say a big thank you to all my teammates for supporting me, and by God’s grace, I know we can do it,” Musa told NFF media after Sunday’s game.

“And for all Nigerians supporting us and praying for us. We know we disappoint them sometimes but there is nothing we can do because that is the game of football.

“We will do all we can to make them proud and by God’s grace we will qualify for the 2022 Fifa World Cup.”