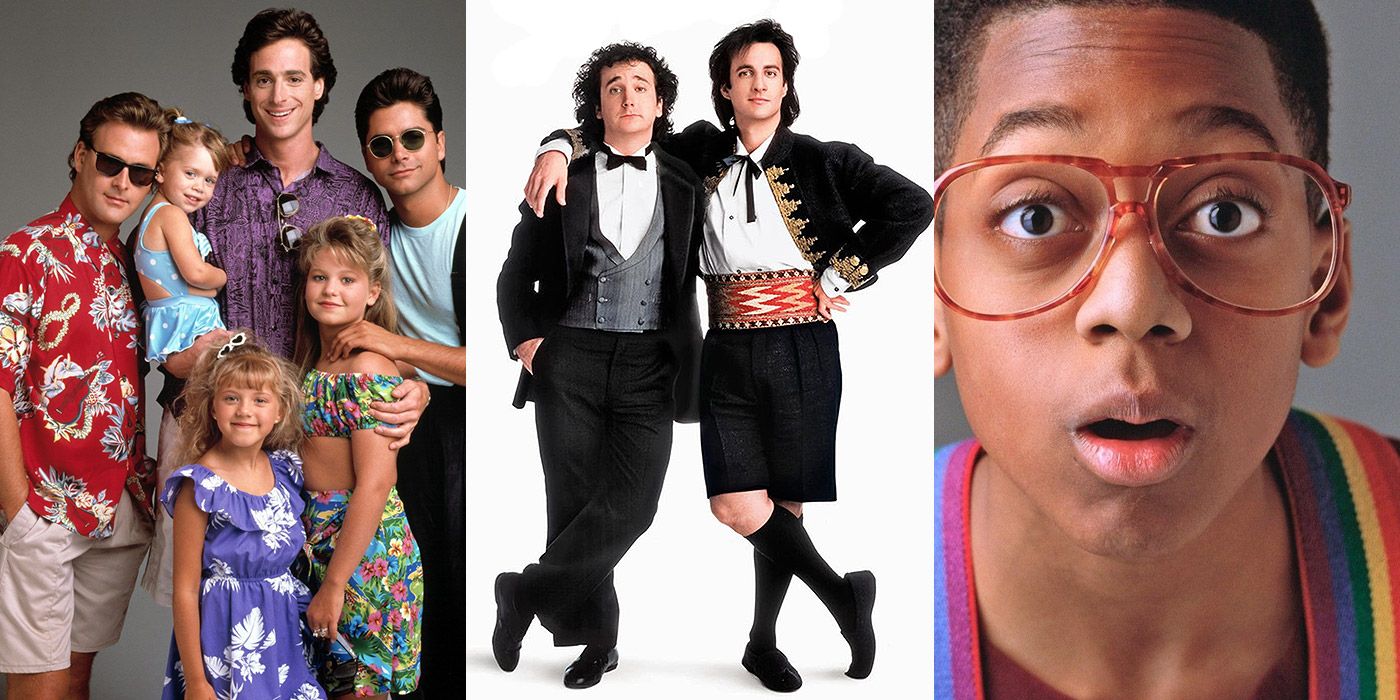 TGIF may have stood for “Thank God It’s Friday,” but ABC put its own spin on it during the 1980s and 1990s with a special block of family-friendly sitcom programming known as “Thank Goodness It’s Funny.” It was an especially prosperous run that gave birth to some of the most beloved comedy shows of all time that still resonate with audiences today.

RELATED: 15 Sitcoms From The ’80s Everyone Forgot About

Over the course of its run, TGIF scored several major hits, while struggling to find a place for others. When taking a look back through their catalog of Friday night funnies, it’s important to recognize the shows that enjoyed a brief moment in the limelight, a well as the towering titans remembered so fondly today.

Updated on October 3rd, 2021 by Derek Draven: TGIF continues to live on in the hearts and minds of children who grew up in the ’80s and ’90s. This block of programming was responsible for some of the most wholesome, fun, and uplifting family-friendly sitcoms ever to grace the television set. The characters in these memorable shows continue to stand the test of time, but not all of the shows on the block enjoyed the same success. Regardless, TGIF shows have a legacy that harkens back to a better, more positive, and uplifting time.

Of all the sitcoms to debut on TGIF, On Our Own is the one most audiences have completely forgotten about. It was an attempt to capitalize on the family unit narrative of many comedies at the time, but too many gimmicks prevented it from ever truly taking off.

The story focused on the Jerrico family, consisting of members with names that all begin with the letter J. It stole a few ideas from films like Mrs. Doubtfire in an attempt to play up the zany comedy, but a major restructuring of the TGIF show just three months into its first season was a clear indicator that the formula just wasn’t working.

In 1989, Hollywood had an unexpected hit on its hands in the form of Look Who’s Talking, starring the voice talents of John Travolta, Bruce Willis, and Kirstie Alley. With a near-$300 million dollar gross against a $7.5 million dollar budget, studio executives immediately saw the potential for a TV sitcom adaptation.

The result was Baby Talk, a loose port of the Hollywood film featuring little babies with the inner monologues of grown adults. Unfortunately, it was critically panned for being too derivative, irritating, and unfunny. After being shuffled around various TGIF timeslots to try and boost ratings, the series got the chop after two seasons.

Family Matters was a multigenerational comedy focused on the Winslows, a family living in the Chicago suburbs. The series tried to capitalize on the wholesome conservative values of predecessors like The Cosby Show, with a strong emphasis on the bonds that tie a family together through good times and bad.

The TGIF show took a huge turn in another direction when the side character Steve Urkel took center stage, and he suddenly became a pop culture phenomenon. Later seasons focused more on Urkel and his chaotic storylines, leaving the rest of the family behind, but it managed to maintain a healthy degree of its charm until the series ended in ’97.

Step by Step was The Brady Bunch for ’90s audiences, starring Patrick Duffy and Suzanne Somers two single parents that meet and marry during a Jamaican vacation. Both of their characters had three children, and they all come together to form one friction-filled happy family.

The series is full of arguments, tussles, and the growing pains that come along with forming a nuclear family. Despite its derivative plot, Step by Step still struck a chord with audiences due to a dynamic assortment of characters, including martial arts expert Sasha Mitchell as the dimwitted cool guy.

Alicia Silverstone’s Hollywood sleeper hit Clueless managed to make unexpectedly significant waves with the teenage pop culture crowd of the time, and it was believed that a sitcom adaptation might achieve the same impact. It joined the TGIF lineup in 1996, lasting just one season before being bumped over to UPN.

RELATED: The 10 Most ’90s Quotes In Clueless

The show was notable for the inclusion of actress Stacey Dash, who starred in the original film as Dee Davenport. Alicia Silverstone chose not to reprise her role for the TGIF show, which might have been a factor in its limited three-season run.

Long before he was hamming it up as merc with a mouth, Deadpool, Hollywood big boy Ryan Reynolds starred in this loveable sitcom that encapsulated its title quite effectively. The show centered on two guys and a girl in their twenties going through college and trying to find their way through life.

The show debuted on the TGIF lineup in 1998 and continued into 2000 when ABC rebranded the event as the “Working Comedy” block. Changes in viewer habits continued to whittle away at Friday timeslots in general, and eventually became a death blow for the show.

Full House kept audiences laughing and crying for eight years. It made stars out of its cast – from John Stamos to the Olsen twins – and even spawned a Netflix sequel that debuted in 2016. Of all the shows in the TGIF lineup, Full House had the most beloved storylines that resonated with audiences around the globe.

The show’s basic premise involves widowed father Danny Tanner asking his brother-in-law and best friend to move into his San Francisco home in order to help him raise his three daughters. As the girls grew up, so too did the men of the house who all became all-star dads in their own right.

Comedian D.L. Hughley got his shot at fame with a sitcom that debuted on TGIF under its 8 PM timeslot. The story focused on Hughley’s character Darryl, a businessman with a wife and two kids who move into a predominantly white suburban neighborhood.

The show stole one too many elements from its spiritual predecessor, The Jeffersons, which might have worked against it. It did last four seasons, providing a solid block of laughs along the way, but it ended up being one of the last shows to grace the long-running TGIF lineup before it was rebranded.

• Available to stream on Disney+

Boy Meets World is a coming-of-age sitcom focused around a typical American kid named Cory Matthews. The series was headlined by Fred Savage’s kid brother Ben, who played Cory Matthews. The narrative was driven largely through his relationship with best friend Shawn, and all the trials and tribulations that come with growing up.

The series followed the boys through middle school, high school, and eventually college, all the while led by their Obi-Wan Kenobi-style mentor Mr. Feeney. The show had a profound impact on young boys growing up in the ’90s who had trouble adjusting to everything from bullying, to peer pressure and other pitfalls.

• Available to stream on Paramount+

This tamer take on the Sabrina comics saw Melissa Joan Hart as the title character, a young witch guided through her magical evolution by her two aunts, Zelda and Hilda. Sabrina also lives with a talking black cat named Salem. It helped launch Hart’s career, turning her into a pop culture icon in her own right.

RELATED: 10 Hidden Details About The Sabrina The Teenage Witch Movie You Never Knew

Sabrina the Teenage Witch combined stereotypical teenage woes with supernatural ruckus, playing on elements from previous sitcoms while managing to make something new in the process. As a teenage girl, Sabrina juggled school, love, and witchcraft with hilarious results.

• Available to stream on Disney+

Jim Henson’s Dinosaurs was an ambitious venture, and that is putting it mildly. A potent satire, the show featured a family of anthropomorphic dinosaurs living around 60 million BC, who weren’t all that dissimilar from a typical blue-collar American family.

Using bodysuits and puppetry, the Sinclair family’s relatable issues were acted out on screen in a way that captured the attention of kids, despite its mature take on issues. Using humor as a vehicle, Dinosaurs tackled issues ranging from sexism to consumer culture, and of course, the extinction of the species, which was planned out in advance.

Hangin’ With Mr. Cooper went through a few script changes during its four-season run. The series’ star, comedian Mark Curry, played a former basketball player turned substitute teacher. The tone of the show went from adult-oriented to family-themed as it progressed, which probably contributed to its longevity.

Set in the San Francisco Bay area, much of the series takes place at Oakbridge High, where Curry’s character is employed. Hangin’ with Mr. Cooper included many of the standard sitcom topics: romance, career development, and family. It didn’t break many new molds, but it did achieve success using a pre-established formula.

Real-life twins Tia and Tamera Mowry starred in this textbook sitcom with a typical ’90s trope to drive the story. In Sister, Sister, the Lowrys played twins separated at birth who reunite as teenagers. Set in metro Detroit, the girls meet by chance at a mall when they’re 14, setting off a story that lasted until 1999.

They worked with their adoptive parents to eventually move into the same house, where they were able to grow up together. As the series progressed, Tia and Tamera got boyfriends, went to college, and tracked down their biological parents, all through the use of their sisterly bond.

The fish-out-of-water formula is played to perfect effect, with Balki trying to absorb as much American culture as possible, and Larry attempting to keep him from ruining his career and romance plans. The duo’s on-screen chemistry was incredible, and their comedic timing was spot-on, each and every episode.

Just the Ten of Us shined a light on a large Catholic family living in Eureka, California. A large slice-of-life sitcom, the series starred comedian Bill Kirchenbauer as Coach Graham Lubbock, a father of eight, and husband to Deborah Harmon’s character Elizabeth.

This series is a spin-off of another well-known family comedy – Growing Pains. Kirchenbauer plays the same character in both shows. Unfortunately, the premise didn’t lead to long-term success, and the TGIF show was canceled after just three seasons.

Megan is a public librarian by trade obsessed with the intersections between art, culture, and society. She’s a nerd for horror, obscure memes, weird history, graphic novels, and binge-worthy science fiction series.