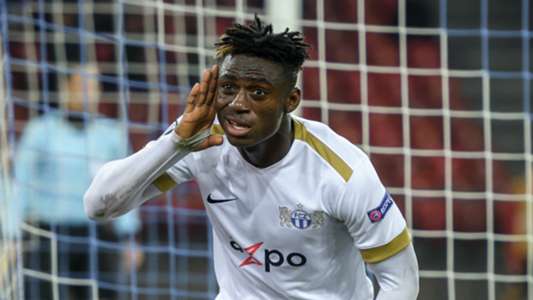 Danish top-flight side Randers have confirmed the signing of Nigeria international Stephen Odey from Genk.

The striker, 23 – who began his professional career at NPFL side MFM – was loaned to the Danish Superliga side in a bid to get regular playing time.

Since his transfer to the Belgian top-flight side from FC Zurich, Odey has struggled to justify his signing.

“Randers FC has recently been in search of a striker, and he has now been found in the 23-year-old Nigerian striker Stephen Odey, who comes to the club from Genk on a loan deal that can be exchanged for a permanent deal, as Randers FC has secured a purchase option,” a statement from Randers website read.

In his maiden campaign with the Smurfs, he featured in 11 games with no goals to show for it. That informed his move to French Ligue 2 side Amiens where he starred in the 2020-21 season.

There, he scored six times in 28 league outings for the Stade de la Licorne, who finished 10th in the log.

“It is an incredibly exciting development that Randers FC is going on, and I look forward to helping the team in a close and exciting match program,” an excited Odey said.

“I have only heard good things about the club and I hope that I can quickly contribute goals and assists so that we can make the fans even more proud of the team.”

Speaking about the move, the club’s sporting director Soren Pedersen stated that his ability and experience would prove handy for the Horses.

“We have been looking for a striker with speed and have been in dialogue with Genk about Stephen for a while, who is an exciting player who is fast, good in the man-man game and is also a skilled finisher, as he has shown in both Swiss and French football,” he told the club website.

“We are pleased that we have managed to get him to Randers and that we can now drive him into the squad and get him into action after the international match break.”

With this move, he joins Alhaji Kamara (Sierra Leone), Issah Salou and compatriots Tosin Kehinde and Vincent Onovo in the list of African representing the Cepheus Park Randers giants.