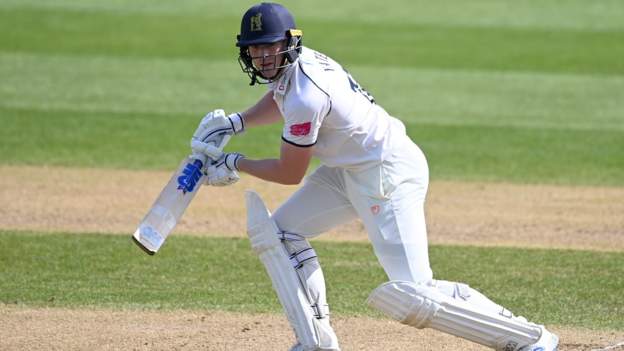 Warwickshire closed day three on 139-2, almost halfway there in their pursuit of 296 to beat Hampshire at Edgbaston.

But Sibley skied to the keeper when he tried to reach his fifty by sweeping Liam Dawson before Chris Benjamin holed out off the England spinner to mid-on.

Keith Barker (75) and Brad Wheal (46 not out) had earlier helped Hampshire reach 332 in their second innings.

Barker hit his 25th first-class half-century – and the former Bears all-rounder’s seventh at Edgbaston – in a 93-run stand with Wheal, who made his career-best score.

After his five-wicket haul with the ball, Barker was eyeing a century when he skied Chemar Holder to Benjamin in the covers – for what proved to be the first of only four wickets to fall in the day.

Danny Briggs then got last man Mohammad Abbas to wrap up the innings five overs later for a three-wicket haul.

But Hampshire then lost Abbas when he limped off with what looked like a hamstring injury just before tea.

Sibley’s patient approach with Yates looked untroubled until the discarded England opener’s patience ran out and he ended up skying the simplest of catches to wicketkeeper Tom Alsop.

Benjamin then spooned Dawson to Barker at mid-on before Yates and Sam Hain (five not out) defended resolutely through the last nine overs.

After a game in which both sides were bowled out cheaply in their first innings, the day-long scoring rate of barely two runs per over suggests it could be a long way into the final day before this game reaches a conclusion.

Victory would put the Bears back on top of Division One, having been replaced by Yorkshire following the Tykes’ two-day win over Somerset.