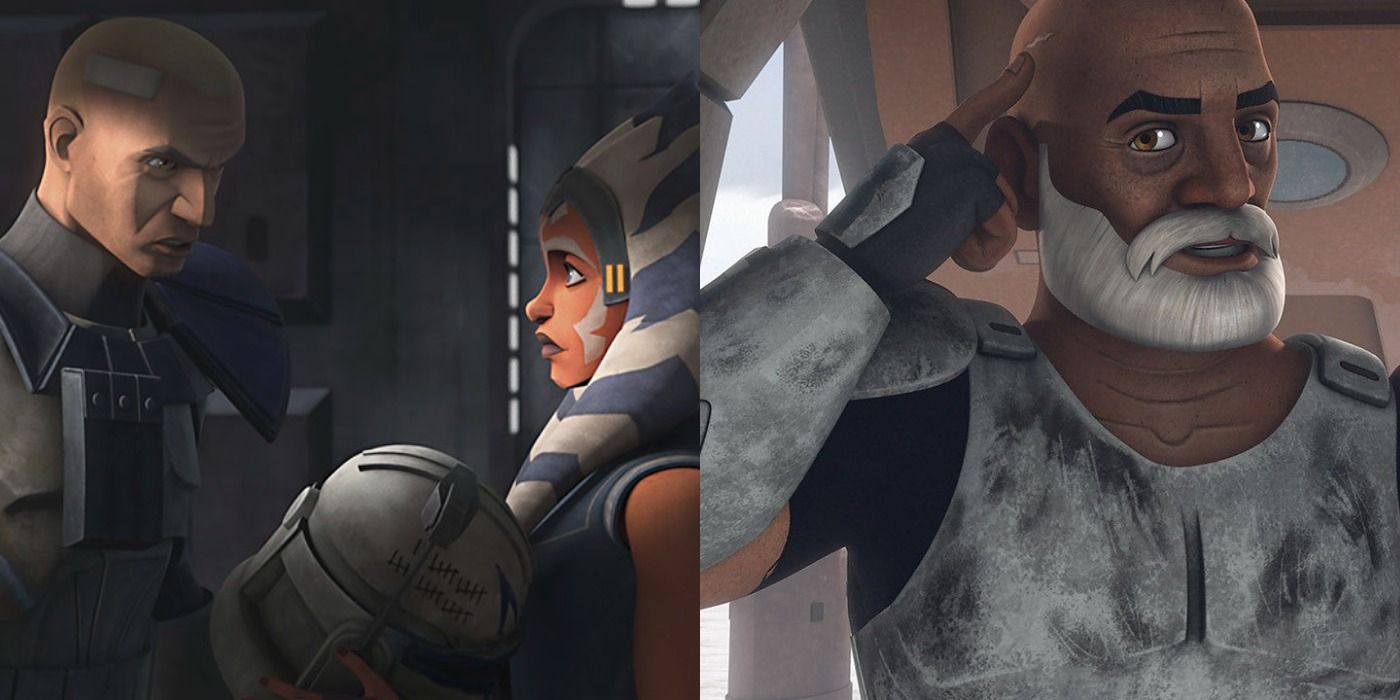 Both through seven fantastic seasons of the show and by Dave Filoni’s words, it was well established that the two main characters of The Clone Wars are Ahsoka Tano and Captain Rex. There are many brilliant characters in the show, but this pair of friends bookend the show and are its central duo.

Captain Rex appears on screen in The Clone Wars, Rebels, and The Bad Batch. Across those three animated shows, there are some amazing Captain Rex quotes.

Updated on October 3rd, 2021 by Rhys McGinley: There are few animated Star Wars characters as great as Captain Rex, who has become an important part of not only The Clone Wars but also Rebels and The Bad Batch. Since his canon debut in 2008’s The Clone Wars film, Rex has provided audiences with some badass clone moments and stories and some of the animated show’s best quotes. There have been many memorable Captain Rex quotes and conversations over the years, whether they be quips about war, reminiscing statements about the past, wise words of advice, or emotional admissions. With the character having so many and being so prominent in Star Wars animation, it is hard to narrow down the very best Captain Rex quotes.

“A Lot Of The General’s Plans Involve Falling.”

This line from Rex exemplifies how well Rex knows Anakin and is a pretty hilarious one, given how true it really is. After Mace questions the nature of Anakin’s plans, Rex points out that falling is nothing new to Anakin, nor is it new to Rex, who always followed his General and never got led astray.

“You’re Gonna Need All Of Them.”

Rex’s return in Rebels was a welcome sight, as he came back alongside Wolffe and Gregor to add a lot to the show in terms of the rebellion and emotional impact due to his history with Ahsoka. Rex also continued to be a fearless character, never backing down from anyone, especially not the Empire.

After being threatened by Kallus, who stated that stormtroopers were good for the Empire and that the Empire had lots of them, Rex cooly says that he will need them all before hanging up on the ISB agent. Even as a grizzled veteran who, at first, believed his fighting days to be behind him, Rex refused to back down to threats and went on to lead his men to victory as he did so many times during the war.

“You’re A Deserter Cut, But You’re Certainly Not A Coward.”

Captain Rex was at the forefront of the underlying story of clone individuality in The Clone Wars. Meeting Cut Luquane was crucial in his character development in that regard.

Meeting Cut, a deserter who started and cared for a family, taught Rex a lot about courage and heart and showed him that just because clones were made for the war, that does not stop them from having other purposes in the Galaxy. Rex likely took a lot of influence from his friend Cut when it came to bravely starting his own resistance movement in The Bad Batch, and joining the rebellion. This Captain Rex quote is a heartwarming one that showed Rex’s heart early in The Clone Wars’ run.

“Ahsoka Tano. I Fought By Her Side From The Battle Of Christophsis To The Siege Of Mandalore And A Friend Of Hers, Is A Friend Of Mine.”

The friendship between Ahsoka Tano and Captain Rex is one of the best in Star Wars. Kicking off in The Clone Wars, the two would remain close for decades and had the utmost respect for one another, exemplified by this quote.

Upon meeting Ezra, Kanan, Zeb, and Sabine, Rex welcomes the group with open arms as soon as they say they got sent by Ahsoka. Rex remembering his and Ahsoka’s first and last battles of the Clone Wars together is touching and plays well into their emotional reunion later in season 2.

“That’s What Brothers Do.”

Echo suffers one of the most horrific fates of any character in The Clone Wars, thought to be dead but instead captured and used by the Separatists to defeat the Republic after being turned into more of a machine than a clone.

RELATED: The 10 Best Duos From The Clone Wars

After heroically rescuing Echo with Clone Force 99, Rex gets thanked by his 501st Legion comrade. Rex’s response is simple, emotional, and perfect, stating that they are brothers, something that Echo sorely needed to hear at that moment, given what had happened to him.

“This Ship Is Going Down And Those Soldiers, My Brothers, Are Willing To Die And Take You And Me Along With Them.”

The Siege of Mandalore arc at the end of season seven contains a few phenomenal Captain Rex quotes, to the point where this will not be the last. The emotion in this line, Dee Bradley Baker’s brilliant, unsung performance, and the heartbreaking nature of it earn its place on this list.

With Ahsoka and Rex seemingly trapped by Jesse and the clones, Ahsoka says they cannot fight them and that she does not want to kill them. Rex understands they are not themselves, but with a tear in his eye, he says his brothers are willing to die to kill them, and they must do something.

Before it became known as one of Ahsoka’s most famous lines in Rebels, this quote first came from Captain Rex in season four of The Clone Wars.

When he and Obi-Wan are captured as slavers and manage to get free in “Escape From Kadavo,” the slaver points out that Obi-Wan will not kill him, as he is a Jedi, to which Rex kills him and says, “I’m no Jedi.” It is a mic drop moment that would later become even more so thanks to Rex’s closest friend.

“Gives Us Clones A Mixed Feelings About The War. Many People Wish It Never Happened. But Without It, We Clones Wouldn’t Exist.”

“Shattered” is an unbelievably tense and somber affair for most of its runtime. Just before Order 66 happens, the close friends Ahsoka and Rex have a conversation about being soldiers in war all their lives.

Rex points out that the clones would not exist without war; however, he realizes that war is not a good thing for people. It shows how much the clones have grown and how they are individuals with real emotions, they may have been made for war, but they are so much more than just expendable numbers.

“The War Left Its Scars On All Of Us.”

Rex is also in Rebels, and when fans meet him again, he talks about various things, including the Clone Wars, to which he says, “The war left its scars on all of us.” It is one of Captain Rex’s best quotes from Rebels.

It is a heartbreaking quote, especially after the Siege of Mandalore. Rex does not just mean physical scars and battle wounds, but mental and emotional scars, from losing his brothers and friends to knowing the Jedi got killed at their hands. Knowing his history through The Clone Wars makes this line even more powerful and harrowing.

After Echo gets rescued from the Separatists on Anaxes he is a different clone, having been experimented on and altered by the Separatists. Rex was happy having saved his brother but knew he was not the same.

Echo was no longer like his brothers, such as Fives, Cody, and Rex. Echo realizes that he fits in with the Bad Batch and joins them, but only after Rex’s encouragement. Rex grew into understanding the importance of one’s individuality and not going with the grain just because of programming; that is encapsulated in his encouraging Echo to go where he feels he belongs, even if Rex misses his brother.

When Order 66 hits in the Siege of Mandalore arc, delivering it to fans from another perspective, it is a devastating moment, made even more so by Rex’s reaction to it.

Rex resisted it as much as he could, trying desperately to save Ahsoka, giving her just enough time to survive. He screams at her to find Fives with a tear in his eye, directing her to information about the inhibitor chips, which ultimately saved both of their lives.

Rex is a natural leader in the Grand Army of the Republic and both a loyal and insanely talented trooper, always willing to put his life on the line for his generals and brothers.

One of the earliest great Captain Rex quotes, as well as the funniest, is in the episode “Rookies” when Fives asks Rex if he can take point (lead the group and take the front and most exposed position), to which Rex says, “I’m always first, kid.” It is a Captain Rex quote that inspires respect and showcases his responsibility and leadership.

“I used to believe that being a good soldier meant doing everything they told you. That’s how they engineered us. But we’re not droids. We’re not programmed. You have to learn to make your own decisions.”

Captain Rex did not immediately believe in the freedom in clones in terms of being able to disobey orders that were wrong, but a turning point for this was the Umbara arc and the hugely important Battle of Umbara.

After the treatment of the clones by Pong Krell, Rex admits that a good soldier uses his head and experiences rather than how they have been engineered. This quote is directed at Dogma, who takes far longer than anyone else to come to terms with the truth that the clones cannot blindly follow orders, that they are individuals and have a place in the Galaxy.

Pong Krell’s treatment of the clones was deplorable, and he called them by their CT numbers, rather than their actual names like Rex, Echo, Fives, etc., seeing them as objects, genetic mutations, not men.

Rex has a plethora of great quotes in this arc, all relating to sticking up for his men. But, at the climax of the arc, after refusing to execute two of his men, Krell tells Rex not to cross him, calling him “clone,” to which Rex replies, “It’s captain, sir.”

“In My Book, Experience Outranks Everything.”

The Clone Wars movie is pretty not great, nothing compared to the series itself. However, it is crucial in the canon as it introduces fans to not only Ahsoka Tano but Captain Rex and their excellent dynamic.

It also has arguably the best Captain Rex quote and by far his most iconic, which he says to Ahsoka when she claims to outrank Rex. The moment kicks off the pair’s fantastic friendship and teaches Ahsoka a lot quickly. The quote would be referenced by Rex and Ahsoka once more in Rebels during an emotional conversation between the friends.

NEXT: 9 Questions From The Clone Wars & Rebels That The Bad Batch Answered

How Ted Lasso Season 2 Is Setting Up A Disappointing Ending