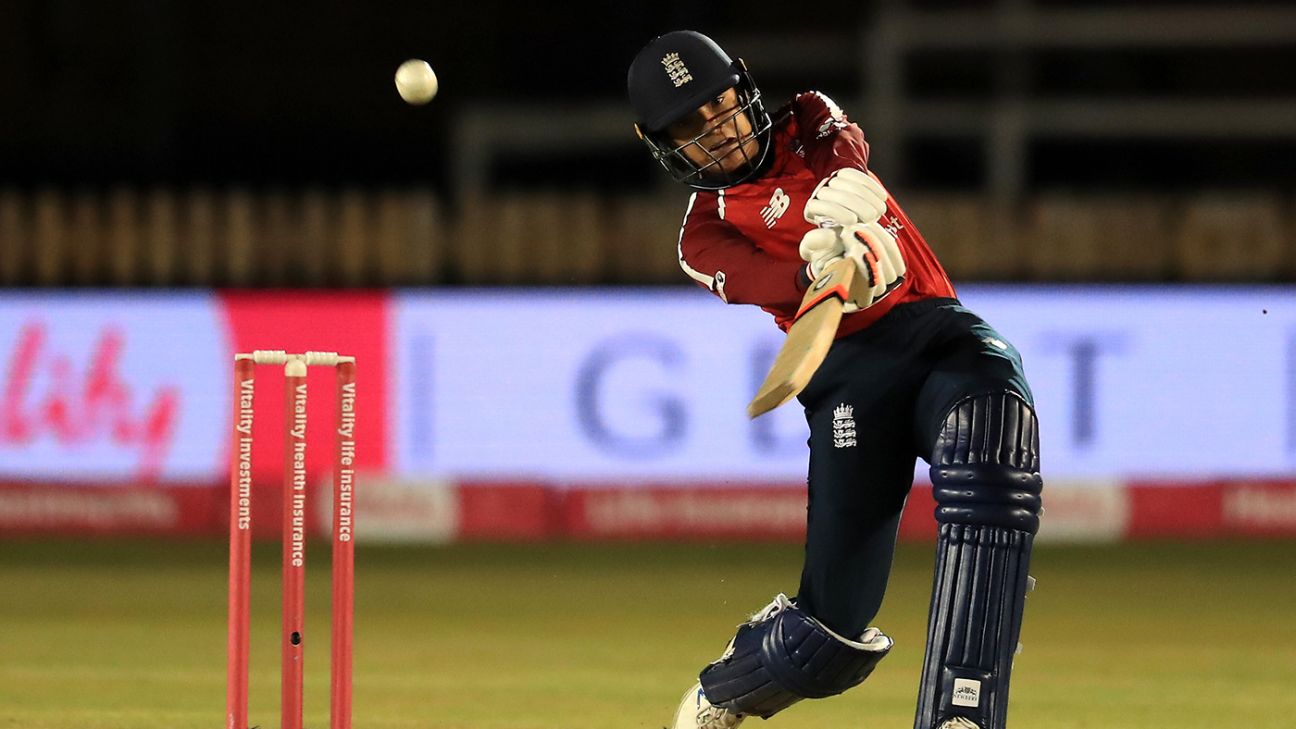 After enjoying a breakthrough year so far, Dunkley aims high ahead of series with NZ

Last time Sophia Dunkley was preparing to face New Zealand, she was searching for a way to break into England’s top six, now she has her sights set on making a top-four place her own.

Speaking on the eve of England’s opening T20I against New Zealand at Chelmsford, Dunkley could reflect on a breakout six months in which she has become something of a regular pick at No. 6 for England across all formats and the third-highest run-scorer in the Women’s Hundred behind international stars Dane van Niekerk and Jemimah Rodrigues. She made her Test and ODI debuts against India over the English summer, scoring an unbeaten 74 in the Test and 73 not out in just her second one-day appearance.

“It’s definitely got world-class players in our top five so it’s quite a hard line-up to get into but for me it’s just trying to focus on what I’m doing and score as many runs as possible and hopefully put my hat in the ring to be in that top four down the line, which is 100 percent one of my goals,” Dunkley said. “I want to bat in the top four for England in all formats. It’s definitely something I’m aspiring to.

“It’s just [a case of] keep going and giving myself the best chance and if I bat a little bit lower down the order just enjoy that as well because it’s a different challenge for me but one I want to do well for the team.”

With Tammy Beaumont, Danni Wyatt, Nat Sciver, Heather Knight and Amy Jones currently batting ahead of her, Dunkley may have to settle for a role as a middle-to-lower-order finisher – and that suits her just fine at the moment.

“Whatever role I get given, if it’s going in in the middle and the back end, it’s just knowing what I do well and sticking to my strengths and giving us the best chance of getting some big scores,” Dunkley said.

After played 10 T20s for England, Dunkley then spent 18 months out of the side. Since she was recalled for the last two of England’s five T20s against West Indies a year ago, she has made 34 runs across six T20I innings with limited opportunities given the strength of the line-up ahead of her.

Promoted to No. 4 in place of injured captain Heather Knight, Dunkley scored 26 as England swept their winter T20 series in New Zealand 3-0 and, over time, she says her approach to batting has changed.

“It’s probably my mindset and how I’ve been thinking about things,” Dunkley said. “It’s easy to get fixated selections or games which are coming up and not thinking about what I’m doing at the time.

“The more that I’ve tried to think of each game as it comes and be in the moment and try and win the game for the team, that’s where I felt I’ve been able to impact the game more. Just thinking about winning the game for the team that I’m playing for, trying to make it a bit more positive has really helped me.”

At No. 3, Dunkley was pivotal to Southern Brave’s run to the inaugural Hundred final, which they lost to Oval Invincibles, and she hopes the interest in women’s cricket generated by that competition carries into the New Zealand series.

“Hopefully it’s given people a good insight into women’s cricket and how good it is and the success of the Hundred hopefully will rub off on the international series,” Dunkley said. “It was an exciting competition and hopefully that’s drawn a lot more people in and we do see more crowds an the international series, which I think will be an exciting one.”

New Zealand’s Amy Satterthwaite, who watched the Hundred from afar but was keen to be involved, agreed.

“The energy and the excitement around it and the size of the crowds, it certainly looked like it was a huge success,” Satterthwaite said. “Even just the standard of cricket that was played, and probably like what you’ve seen a little bit with the WBBL in the past, you see the level of domestic cricketers coming into competitions like that and the way that they’ve performed, we’ve seen some new names that you probably hadn’t seen before, so I certainly think from a distance that it looked like it was a real success.

“It’s just awesome to see the support behind women’s cricket and the number of people that are coming in to watch. We saw it in the Hundred over here so I’m really excited about the size of the crowds that we hopefully will get across this series.”

Wednesday’s tour opener at Chelmsford was close to being sold out on Tuesday and is set to be Knight’s 200th match for England. Fixtures at Hove and Taunton follow before the sides hone their preparations for next year’s 50-over World Cup in New Zealand with five ODIs, starting in Bristol on September 16.