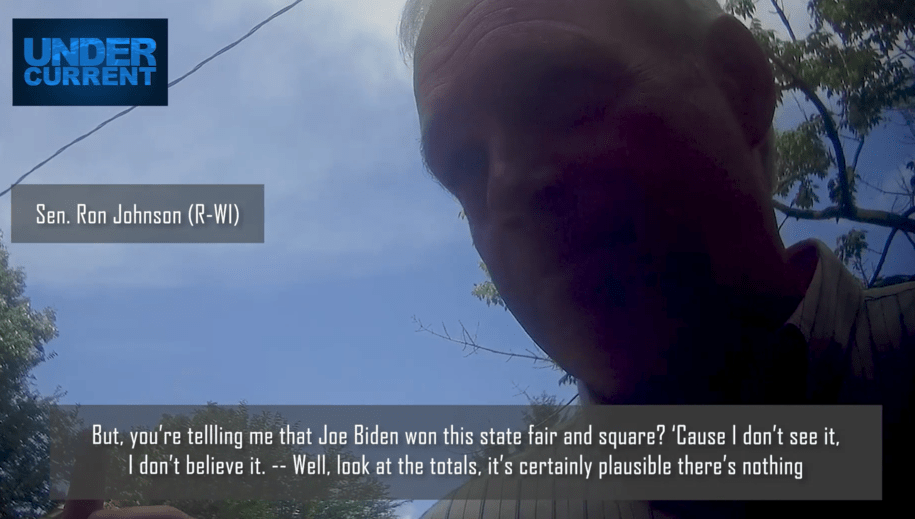 Johnson goes on to explain that a recount was done; according to him, the recount showed that Republicans did very well Wisconsin. In fact, Johnson says the GOP did better than they ever have in Wisconsin, and that even though Trump did better than previous GOP candidates, he didn’t do well enough to overcome Biden. This kind of Election Day reality, of course, has been a real tough hurdle for the conspiracy theorists to jump. And then, bringing his voice down—because Ron Johnson is nothing if not a coward and a snake-oil salesman—Johnson gives up the ghost: “The only reason Donald Trump lost Wisconsin is that 51,000 Republican voters didn’t vote for him. They voted for Republican candidates.”

Windsor says with feigned disbelief that she can’t imagine Biden won “fair and square,” to which Johnson replies, “Well, look at the totals. it’s certainly plausible there’s nothing obviously skewed about the results.” And then, very matter-of-factly, he adds, “There isn’t.” Now that’s a fact. Johnson goes on to prove that while he seems like an incompetent person, he can still do simple math, explaining that if Trump had gotten all of the votes that went to Republicans in House races in Wisconsin, “he would have won.” Trump received about 1.61 million votes in the Cheese State. Republican House members received a total of about 1.659 million votes. Trump lost by about 20,000 votes to President Joe Biden.

This is an interesting admission from Johnson since facts have never gotten in the way of Johnson’s ability to lie to the American public about our national security, especially for his own political gain. He has also enjoyed playing a very racist game of promoting the concept that MAGA-types being unhappy about losing an election and trying to overthrow the democratic process is fine and legal as long as they’re mostly white. More recently, Ron has been out and about promoting terrible pandemic science, the kind of anti-vaxxer and anti-public health information that would lead one to believe Johnson had figured out a way to escape the laws of physics and scrape beneath the bottom of a barrel.

EXCLUSIVE: Sen Ron Johnson blames Trump for losing Wisconsin in 2020 and tells me “there’s nothing obviously skewed about the results.” pic.twitter.com/OeRkVkkVAN