Sean Spicer freaks out over removal from military advisory board, vows to sue 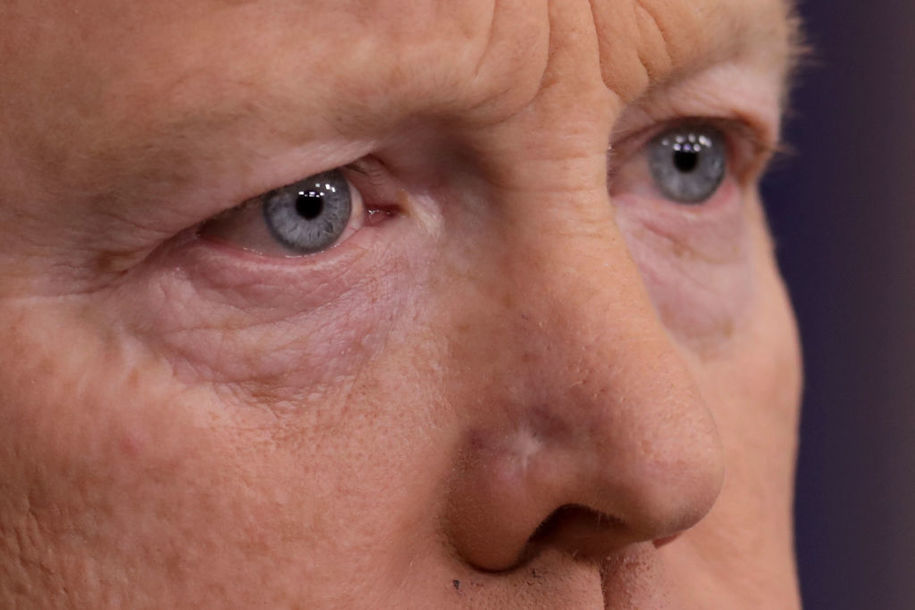 Sean Spicer, a former White House press secretary, said he planned to sue President Joe Biden over a demand that Spicer and others resign from positions at US military academies given to them by President Donald Trump.

“I will not be submitting my resignation, and I will be joining a lawsuit to fight this,” Spicer said on Wednesday on Newsmax, the conservative cable network where he is an anchor.

Okay, the fact that he has his own show on Newsmax tells you how worthless this unrepentant Trump-lamprey is. Newsmax is to news what Pepsi Max is to carbonated dingo piss.

And on what basis is he gonna sue?

The Biden administration on Wednesday sent letters to 11 Trump-era appointees to military-academy advisory boards requesting their resignations. They included Spicer, the former national security advisor H. R. McMaster, and Kellyanne Conway, a former senior advisor to Trump. The appointees held positions at schools including the US Military Academy and the Naval Academy.

Of course, what really appears to have set Spicer off was current White House press secretary Jen Psaki’s defense of the Biden administration’s move. Shortly after the letters were sent, Psaki stated, “The president’s objective is what any president’s objective is, was to ensure you have nominees and people serving on these boards who are qualified to serve on them and who are aligned with your values. And so yes, that was an ask that was made.” And, with a skosh of snark, she continued: “I will let others evaluate whether they think Kellyanne Conway and Sean Spicer and others were qualified or not political to serve on these boards.”

Hoo-boy, Sean didn’t like that. And he went off like an enraged Jiminy Cricket on bath salts.

BREAKING: As the Biden administration attempts to remove Trump appointees from their Military Academy boards, @seanspicer calls out White House Press Secretary Jen Psaki, and announces he will take legal action against the decision. pic.twitter.com/bPgLlJhFzK

SPICER: “I’m announcing tonight for the first time that I will not be submitting my resignation and I will be joining a lawsuit to fight this. Here is the email I received right before noon today: ‘I’m writing to request your resignation from the Board of Visitors to the United States Naval Academy. If we do not receive your resignation by the end of today,’ which is right now, and they won’t, ‘you will be terminated. Attached is a formal letter.’ The letter says that the email states ‘on behalf of President Biden, I’m requesting your resignation as a member of the Board of Visitors to the U.S. Naval Academy.’ … Remember back during the inauguration when President Biden said ‘I’m gonna be the president for all people, Trump voters, everyone else’? Yeah, where did that go? Pretty out the window, pretty much, huh? At a time when the administration is dealing with COVID, Afghanistan, the effects of Hurricane Ida, what are their priorities? Apparently they’re prioritizing flying to California to campaign for Gov. Newsom and firing veterans from service academies.”

There’s a lot more nonsense, but it’s pretty much all like that. There was an obligatory mention of critical race theory and a reference to his 22-year Navy service and some bullshit about this move bringing partisanship to a “new level,” but it all seemed custom-designed to fill airtime and make Spicer look like some sort of cross between a righteous revival preacher and a Furby.

I’d include more from the clip, but transcribing Spicer is a bit like trying to play a Tchaikovsky piano concerto while high, and without a piano.

Of course, Spicer wasn’t alone in wanting to hang on to the sweet gig he’d earned by faithfully fibbing for Donald Trump. Top Trump capo Kellyanne Conway made some feckless bleating noises as well.

The boards of the Military Academy at West Point, Naval Academy in Annapolis and Air Force Academy in Colorado Springs are made up of a mix of lawmakers and presidential appointees who traditionally meet several times a year to provide non-binding advice on issues like curriculum, student morale and institution needs.

In addition, it only makes sense that President Biden would want to force out a bunch (18, to be exact) of inveterate liars who were placed in their positions by a guy who, you know, tried to end America. But if Republicans ain’t outragin’, they basically cease to exist.

Yeah, the Biden administration has bigger priorities than this, but it’s somehow able to do more than one thing at a time. And campaigning to beat back conservatives’ silly California recall effort during COVID-19 isn’t really that egregious, especially compared to the numerous superspreader rallies Donald Trump held in fall 2020 when he was supposed to be pretending to tackle the pandemic.

But, hey, consistency has never really been these folks’ strong suit, has it?