SAFF Championship 2021: From poor finishing to a nervy defence – Three things that we learned from India’s 1-0 win over Nepal 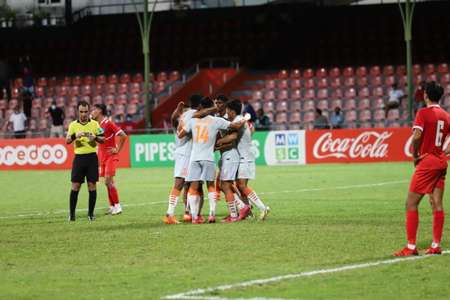 Igor Stimac was witnessed doing a bit of jig after Sunil Chhetri finally sent the ball to the back of the net to give India the lead against a gritty Nepal in their SAFF Championship fixture on Sunday. And immediately after the final whistle, there was a fist pump as he embraced his assistant Shanmugam Venkatesh.

Although the Croatian wouldn’t acknowledge that he is under any kind of pressure, his reaction to the goal spoke volumes. He made five changes to the starting XI that took the pitch against Sri Lanka and there was evidently more intent and purpose in the display of the Blue Tigers.

On the way to pick up their first win in the SAFF Championship, India did create a few chances but profligacy in front of goal only built more pressure until Sunil Chhetri scored the eventual winner in the 82nd minute of the match. Let us take a look at the three key points of the match.

Visible improvements but far from convincing

After two successive lacklustre displays against Bangladesh and Sri Lanka, the performance against Nepal was definitely an upgrade. India were dominating in possession, were making inroads in the attacking third, and looked more fluid in passing around the ball. More importantly, they created at least three to four goalscoring opportunities against a Nepal side that had set themselves up in a 5-4-1 formation and were defending with two banks of five and four.

However, the finishing was poor and there was hardly any coordination in the opposition box amongst the forwards that troubled the Gorkhali defence.  Manvir Singh had hardly any impact, apart from a header which was kept out by Kiran Limbu, as he was well contained by Nepal’s defensive mainstay Rohit Chand. In fact, he had to be subbed off even when India were desperately looking for a goal. So, while Stimac would be relieved after picking up the three points, the attacking woes continue to plague him.

Sunil Chhetri steals limelight both for right and wrong reasons

The Indian skipper was seen kicking the woodwork after he failed to score in an open net from a handshaking distance of goal. In the second half, he missed another header even though he was unmarked. Given the high standards that he has set for himself, it was unacceptable for him to miss those chances. Although he did redeem himself by scoring the winner to equal Brazilian legend Pele’sinternational goal tally, overall it was an average day in the office.

Meanwhile, it also became evident once again that if Chhetri fails to produce the goods, there is hardly anyone who can step up and fill in his shoes. India has scored just two goals in the competition so far, and both of them have come from the boots of the 37-year-old.

For almost 80 minutes in the match, India’s defence had hardly any significant threat to deal with. The Gorkhalis were soaking in the pressure and could barely move out of their defensive cocoon. However, after falling behind, they threw caution to the wind and started pushing more men in the attacking third. They had just 12 minutes, including additional time, to equalise and they made the most of it. It was shocking how easily Abdullah Almutairi’s men opened up India’s defence and even had a couple of goalscoring opportunities in that short span of time.

Against Maldives, the likes of Pritam Kotal, Subhasish Bose must remain on their toes throughout the 90 minutes. The Red Snappers will take the game to India and in Ali Ashfaq, they have one of the most clinical strikers in the SAFF region. The attacking trident of Ali Fasir, Hamza Mohammed, and Ashfaq would not be easy to contain, and the Indian defenders must take their game a notch higher to get the better of them.