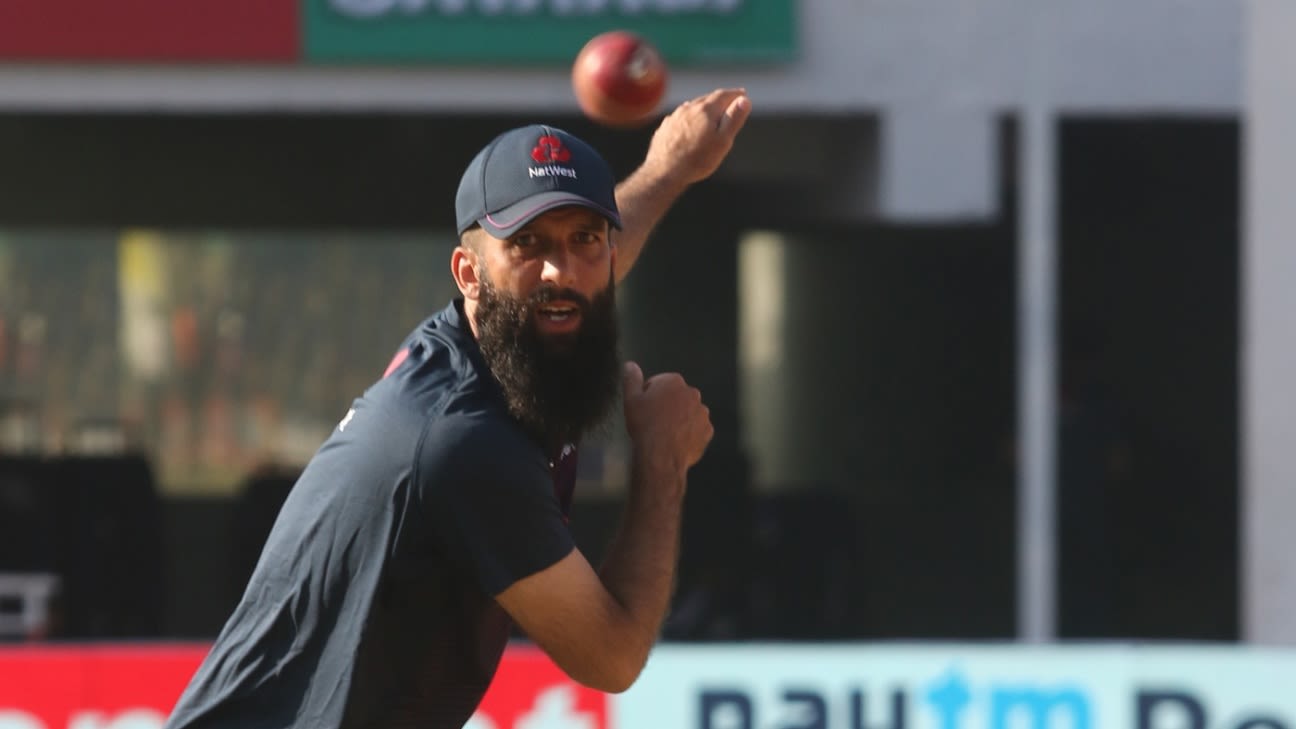 Captain says Hameed will take the opportunity with “both hands”, if he plays

Joe Root, England’s captain, hopes that Moeen Ali can transform the confidence and fluency of his recent table-topping exploits with Birmingham Phoenix into the Test arena, as he prepares to make only his second Test appearance in two years, and his first on home soil since the 2019 Ashes.
Moeen’s return to the Test team was confirmed by the ECB on Tuesday morning, and he looks set to slot straight into a line-up that was outplayed by India for large parts of last week’s drawn first Test at Trent Bridge, and which – in the ongoing absence of Ben Stokes – has had an ill-balanced look to it from the start of the summer against New Zealand.
England have chosen not to field a spinner in any of their three Tests to date this season, amid concerns about a batting line-up that has consistently misfired, with only two batters – Root himself and Rory Burns – so far mustering more than 150 runs across six completed innings.
And while the circumstances of Moeen’s recall are far from ideal, given that his one-off Test appearance in Chennai in February was also his only first-class fixture since 2019, his confidence is currently sky-high following a series of match-winning performances in the Hundred, including a total of 108 runs from 54 balls in his last two visits to the crease, against Oval Invincibles and Welsh Fire this week. And Root hopes that that positive mindset will quickly translate to Test cricket.

“I would happily give him a huge amount of responsibility if he does play because he responds extremely well to that,” Root added. “He is a leader within the dressing room, a great personality, he drags people with him on the field and in the dressing room, so it will be great to have him back around.”

The timing of Moeen’s call-up, however, begs a number of questions – not least given his impressive Test record against India, which includes a haul of 31 wickets at 22.22 in seven previous home Tests, including a Player-of-the-Match performance on his last recall to the team in 2018, when he helped to rescue England from 86 for 6 on the first morning, before sealing victory with nine wickets in the match.

JUST IN: Stuart Broad tweaked his right calf during England’s warm-up at Lord’s and was unable to train with the rest of the squad.

He will have a scan on Wednesday to determine the extent of his injury #ENGvIND pic.twitter.com/04UoYPOXlg

Moeen also performed admirably in his only Test appearance in the past two years, as he bounced back from a bout of Covid-19 in Sri Lanka to claim eight wickets in the second Test against India, as well as blast a quickfire 43 from 18 balls from No. 9 in the final moments of England’s 317-run defeat. Thereafter, however, the circumstances of his departure from the tour clearly rankled – not least when Root himself erroneously stated that Moeen had “chosen” to go home, when in fact his absence had been agreed as part of the ECB’s rest-and-rotation policy.

Root apologised at the time for his misrepresentation of the situation, but insisted he did not regret the circumstances of Moeen’s continued absence, given that his priorities, like so many others in England’s set-up, are currently split across formats in the lead-up to the T20 World Cup this winter.

“We’ve tried to manage things as best we can over a period of time and I’ve always been a huge fan of Mo,” Root said. “I think he’s a wonderful cricketer across the formats, I think he’s a great ambassador for the game, and it’s wonderful to see him back in the Test arena, being back in a Test squad.

“It was a brilliant performance he put in in Chennai and if he gets an opportunity, he’ll be desperate to impress and show everyone how good he is in Test cricket as well as white-ball cricket. He’s certainly a big contender. We haven’t been to the ground yet and we’ll look at conditions and weigh things up but he’s in a great position to play.”

Moeen’s prospective comeback, coupled with the likely return to fitness of Ollie Pope, could mean wholesale changes to England’s batting line-up, with Haseeb Hameed also pushing for a return to the Test line-up, more than four years after the last of his three appearances, as a 19-year-old, on the 2016-17 tour of India. England also have concerns over Stuart Broad’s fitness, with the senior seamer sent for a scan after tweaking his right calf in training.

Should Hameed get the nod, it would mark a recall even more extraordinary than Moeen’s, given the depths to which his game slumped in the years after his progress was abruptly halted by a broken hand. He failed to make a first-class century in either of his next two seasons for Lancashire, including a grim campaign in 2018 when he averaged 9.44 with a top score of 31.

However, a shift to Nottinghamshire has heralded a resurgence in form and fortune, with three Championship centuries at 51.13 this summer, as well as a maiden List A century against Warwickshire in the Royal London Cup. And with his technique and temperament back in alignment, Root believes the experiences he has been through will make him all the better prepared for a second shot at Test cricket.

“More than anything, it takes a huge strength of character to be able to go through something like that and get yourself back into the position that he is in right now,” Root said. “Since the first day I met him I’ve been extremely impressed with him as a person, with his maturity as a young man then. I think that served him really well during a difficult spell in his career and now you’re seeing him come into some really good form.

“We think of him physically maturing but I think his game has grown as well. He’s added shots to what is a very strong defence and has turned himself into a brilliant player. His work ethic is outstanding. He thinks about the game extremely well and it’s great to have had him in and around the squad this summer. If he gets an opportunity I’m sure he’ll look to take it with both hands and try to make the position his own in this team.”