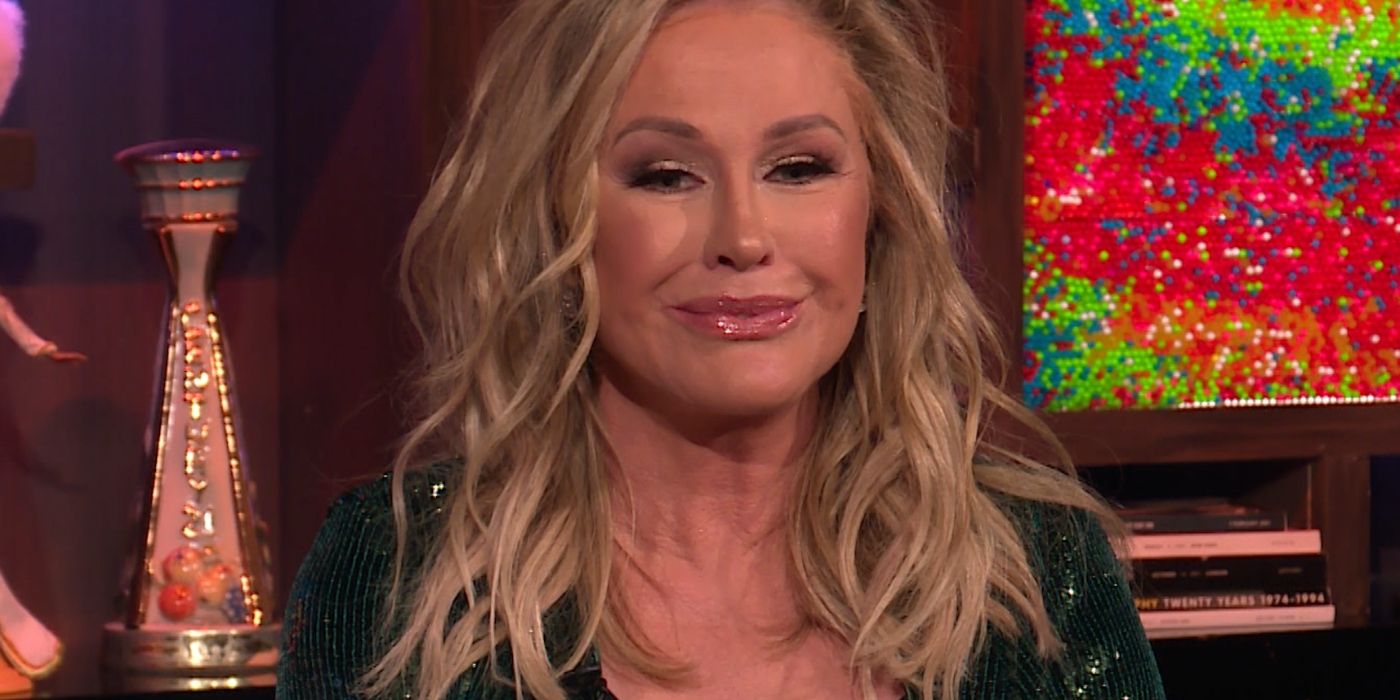 Kathy Hilton from RHOBH wore a dentist costume with the name Hunky Dory for the premiere of her sister Kyle Richards’ new film Halloween Kills.

Kathy Hilton from The Real Housewives of Beverly Hills poked fun at herself at the Halloween Kills premiere by wearing a Hunky Dory costume. Viewers got to officially met Kathy as a “friend of” during the latest season of the popular Bravo series. Kathy immediately became a fan favorite for her quirky personality and her easy-going attitude. Even though she is only a friend of the show, Kathy has become a must-have cast member on RHOBH.

Her peculiar personality became evident while the girls were in Lake Tahoe together and Kathy, who has several family scandals, claimed she used to pretend she was a dentist with the neighborhood children. While Kyle was used to her older sister’s funny antics, the other women couldn’t believe some of the things she would say. Nonetheless, Kathy is a breath of fresh air to the franchise and must-needed comic relief to the show.

On Tuesday night, the 62-year-old supported her sister Kyle Richards by attending the premiere of her new film Halloween Kills (via Page Six). Kathy wore a costume that was a nod to some of her best moments on RHOBH. She was dressed as a dentist with a name across her chest that said Hunky Dory, DDS. Earlier in the season, Kathy, who can’t watch RHOBH season 1, admitted that she used to perform dental procedures on local kids when she was a child, as well, she also used to work as a dental assistant. Also, while at Lisa Rinna’s house celebrating Garcelle Beavuis’ birthday, Kathy asked a fellow cast member, “who is Hunky Dory?” Kathy was poking fun at two of her most iconic moments throughout the season.

Besides Kathy, some of the other women from RHOBH attended the premiere dressed up in costume as well. Kyle, who is reprising her role as Lindsey Wallace in the film, dressed up as a ringmaster wearing a top hat and thigh-high boots. Dorit Kemsley, who owes money in unpaid taxes, got into the Hilton family fun too as she dressed up as Kathy’s eldest daughter Paris Hilton. She mimicked Paris’ iconic silver cowl neck dress from her twenty-first birthday party. Meanwhile, Lisa dressed as a pink bunny, a nod to her feud Kim Richards at the season 7 reunion. Former RHOBH housewife Teddi Mellencamp also showed up wearing a jaw-dropping gladiator costume. However, not all of Kyle’s RHOBH castmates were able to attend the premiere of her new movie. Sutton Stracke, Crystal Kung Minkoff, Erika Jayne, and Garcelle did not walk the red carpet along with the other ladies.

Kathy isn’t afraid to show off her wacky side and that is why RHOBH fans love her. She is unapologetically herself and sometimes Kathy, who had a fallout with Lisa Vanderpump, doesn’t even realize how funny she is. This dentist costume is just the icing on the cake as to why fans are so obsessed with Mrs. Kathy.

The Real Housewives of Beverly Hills airs Wednesdays at 8 p.m. EST on Bravo.