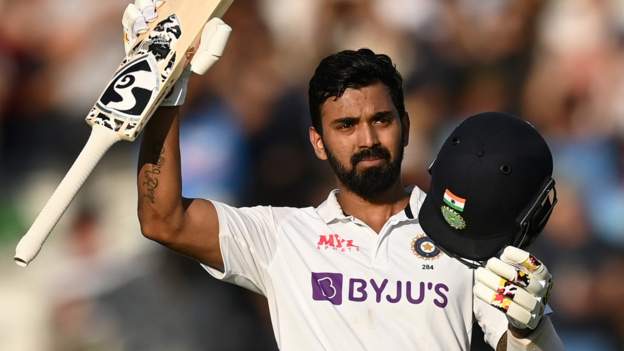 England suffered a demoralising first day of the second Test as a KL Rahul century led India towards a huge total after they were asked to bat first.

Rahul played with elegance for 127 not out, growing in stature following his supporting role in an opening stand of 126 with Rohit Sharma, who made a superb 83 at Lord’s.

With India captain Virat Kohli adding 42 in a third-wicket partnership of 117 with Rahul, India moved to 276-3 and in a prime position to take complete control of the match.

However, the home side were collectively poor with the ball and, as the clouds gave way to evening sunshine, batting looked increasingly comfortable on a true pitch.

England were aided by the rain in the drawn first Test at Trent Bridge. The London weather is forecast to be dry for the weekend, so the hosts will need their batsmen – including Haseeb Hameed, recalled for Zak Crawley – to dig them out of this one.

Were England right to bowl first?

It was hard to disagree with England captain Joe Root when he opted to bowl first on a cool, grey, damp morning. Kohli said he would have done the same.

However, while it is fair to say England did not get the amount of assistance they might have expected, rarely did they find the right area, alternating between too wide and too straight.

Credit should be given to Rohit and Rahul, who came through what could have been a difficult period with sound judgement, only playing when absolutely necessary.

After Stuart Broad was ruled out for the series with a calf injury, Anderson overcame a quad problem to produce his double strike in the run-up to tea.

By that time, though, India had built a strong foundation and it would look even more ominous for England had Robinson not struck.

Still, India will be looking to heap pressure on England by batting for most of Friday.

Rahul is only playing in this series after injuries to Shubman Gill and Mayank Agarwal, yet began with scores of 84 and 26 at Trent Bridge and followed up with his first Test hundred in almost three years.

He began as the support to Rohit, who took four fours in one Sam Curran over and got the better of a thrilling duel with the rapid Mark Wood.

Rahul did not score his first boundary – a straight six off Moeen Ali – until the 108th ball he faced, shortly before Rohit fell for his best Test score outside India.

Pujara’s struggles continued – his highest score in his past 10 Test innings is 21 – but Rahul gradually unfurled his trademark drives through the off side.

Kohli had not before passed 25 in four Test innings at Lord’s and had to come through an examination by Curran and almost played on off Moeen.

Robinson eventually drew him into playing away from his body, with Root grasping the edge at first slip.

Given their recent batting frailty, the last thing England needed was such a flat display with the ball.

Broad is missing a home Test for only the third time since 2010. Without him, England were toothless for long periods.

Robinson’s usual accuracy deserted him, Curran began by bowling both sides of the wicket, Wood – Broad’s replacement – touched 96mph but was expensive, while the recalled Moeen struggled to make an impact.

As ever, it was left to Anderson, who first nipped one down the Lord’s slope to bowl Rohit, then got one got one to go the other way to have the poking Pujara held at third slip.

It was the start of an England improvement. Curran bowled a testing spell from round the wicket and Robinson’s probing with the second new ball was rewarded by the wicket of Kohli.

There was still time for Root to waste a review on new man Ajinkya Rahane, perhaps a result of England’s frustrating day.

‘A masterclass’ from Rahul – what they said

England seamer Ollie Robinson on BBC Sport: “Everybody saw how green the pitch was this morning and everybody here thought ‘win the toss and bowl’. We toiled hard.

“Virat is probably my biggest wicket to date, so I was happy with that. If can get them five or six down early, they have quite a long tail, and we’d still be in the game.”

Former England captain Michael Vaughan on BBC Test Match Special: “It was perfection from KL Rahul. That was a masterclass in how to open the batting in England. It’s been a joy to watch – a craftsman at work.

“It is a huge day for England tomorrow. They’ve got to get the wickets, and then it is about the batting, which has been the downfall in the last year.”

“But there didn’t seem to be a great plan about England’s bowling today. India have built a fantastic platform.”

Former England batsman Mark Ramprakash: “It’s been a chastening day for England. There will be some weary bodies and minds. But the next two batsmen are left-handers who play in an attacking style, and then there are the four seamers.

“There is light at the end of the tunnel for England, but they will have to bat well and bat long.”