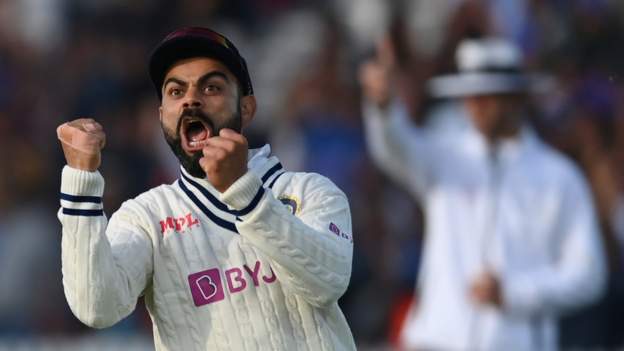 For so long has Virat Kohli been the man who could do no wrong that when things wobble for India there seems to be a cosmic disturbance, a rearrangement of the order of things.

He last made a Test century in November 2019. He has not scored a hundred for India in any format for 51 innings.

After a remarkable win over England at Lord’s, India were thumped by an innings inside four days at Emerald Headingley.

A thrilling series – poised at 1-1 with two Tests to play – resumes at the Kia Oval on Thursday and Kohli holds the key to whether India can bounce back.

What has gone wrong with Kohli’s batting?

Against swing bowlers, he seems to be suffering from ‘off-stumpitis’ – uncertainty where his off stump is.

He is playing at deliveries he should leave alone. Bowlers have played on his ego, challenging him to play the ball – and Kohli has obliged, prodding hesitantly to edge behind.

Batsmen on either side of him in the order, Cheteshwar Pujara and Ajinkya Rahane – both with greater patience and no great urgency to establish who is boss – have got out in similar fashion in England, causing a middle-order crisis.

Since the 2018 tour of England when he did not get out to James Anderson once while making two centuries and a 97, Kohli has been conscious of playing close to his body and meeting the ball under his eye.

On this tour he has been leaving the outswingers well but has got himself into a tangle over the ball that threatens to leave him but holds it line.

Kohli has the equipment – mental and physical – to sort it out. But with back-to-back Tests to come, the pressure is on to get his batting right, his team selection right and his tactics right.

Certain captains, such as England’s Mike Brearley and India’s Tiger Pataudi (late in his career), rose above personal batting failures to lead their sides to victories.

For Kohli to be spoken of in the same breath – India are chasing a first series win in England since 2007 – he must show himself to be as inspirational in defeat as in victory; when things are going wrong as well as when his team are on top.

Kohli enjoys captaincy. He enjoys stamping his personality on the team. He enjoys setting challenges as much for his team-mates as his opponents.

His record as a leader is impressive. His batting average as captain is comfortably higher than before he took the job, and he is India’s most successful Test skipper with 37 wins. 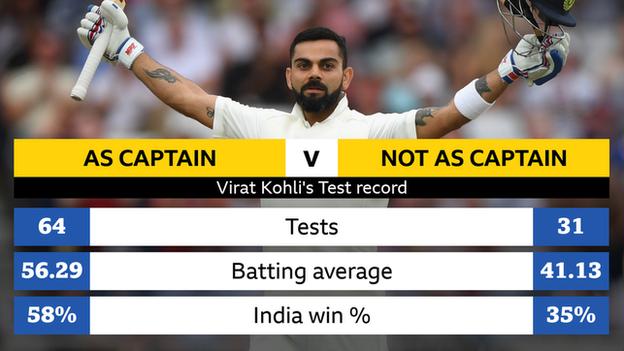 Kohli and his team’s celebrations – full-throated, full-blooded and unabashedly self-congratulatory, with the occasional verbal swipe at the opposition – have sometimes distracted from the performance.

What Kohli lacks in tactical nous, he makes up for by ensuring his team are aligned to the same vision, and play with aggression and enormous self-belief.

That cliche ‘team spirit’ has been more palpable under Kohli than most India captains. He has infused the team with his own mantra: exceptional fitness, high fielding standards and the importance of Test cricket.

I remember a meal with Kohli at a team hotel where other players would walk past our table, glance at what he was eating and then order the same dish themselves. Like good leaders, Kohli inspires his men beyond their profession.

If the halo over Kohli’s head has slipped just a little, it is as much because of his poor form as his over-the-top leadership in England.

It is a style which appears justified when it works, but looks silly and childish when it doesn’t.

Does India’s aggression cross the line?

Kohli at 32 suddenly finds himself having to answer questions about both his batting and his captaincy. He got the second aspect right at Lord’s, leaving England 60 overs to save the Test, a task beyond their capabilities.

But at Headingley he might have been fooled by the brownish look of the wicket, choosing to bat first and having the double ignominy of being bowled out for 78 and watching England pile on more than five times that total.

In a break during the game, television in India showed the 2002 Test at Headingley when India captain Sourav Ganguly won the toss and chose to bat on seamer-friendly track. But he had Sachin Tendulkar and Rahul Dravid in his team. All three made centuries and India won by an innings.

When Jasprit Bumrah, the mildest of fast bowlers, was asked to target number 11 Anderson with a series of bouncers, the Kohli philosophy became clear. Hostility and retaliating before being provoked is key. Confrontations are encouraged, in the belief it pumps up bowlers.

There is, too, the notion sometimes that victory is not enough; it has to be accompanied by humiliation, a word that has no place in sport. At Lord’s, stump mics picked up much derisive laughter as the England wickets fell or batsmen struggled.

I wrote in my newspaper column at the time: ‘Do we want our cricket team to be seen as aggressive bullies who act as if the 22 yards and everything else belongs to them, or is there another way of winning that does not reach down into the lesser devils (as opposed to the better angels) of our nature?’

The reaction was immediate. A huge number of fans thought I was wrong to berate Kohli, but there were a significant number who believed Kohli had crossed a line.

Do you want a soft Kohli who loses Tests or an aggressive one who wins? That was the gist of the responses, minus the obscenities. Triumphalism brooks no criticism.

Yet captaincy cannot be about attacking all the time. Kohli has shown his team cannot be messed with. Playing well is the best revenge.

In sport, victory is the ultimate justification and, if India win the series, the frustrations will be forgotten. If Kohli’s batting plays a role, then he would have personally pushed the halo back.