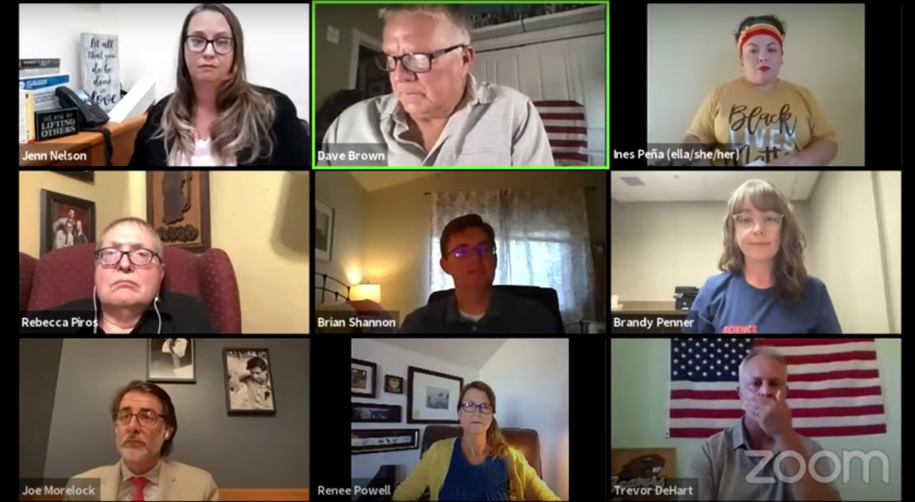 Despite reports indicating that 93% of Black Lives Matter (BLM) protests have been peaceful, some individuals can’t stop associating the BLM movement with violence. But that’s not the only instance with which some GOP states and local officials associate racial injustice and other movements with politics instead of human rights: An Oregon school district voted Tuesday 4-3 to ban Black Lives Matter, LGBTQ+, and other “political” signs, flags, and articles of clothing from their school buildings.

The decision to ban any sort of political signage was made after the board heard opinions from a small group of community members. While the board still has to decide what counts as “political,” Pride flags and BLM messages were repeatedly referenced during the Newberg Public School meeting, NBC News reported

School Board Director and Vice Chair Brian Shannon, who voted for the measure and added the language about apparel, told NBC News affiliate KGW-TV the “main goal of this is to get political symbols and divisive symbols out of our schools so we can focus on the already difficult task of educating our students in the core subjects.”

While the apparel rule would only apply to staff while they’re working, it impacts more than 5,000 students in the school district.

Just in – the Newberg School Board voted (4-3) to remove #NOT YET signs & #PRIDE flags from district buildings. The vote also means faculty & staff can’t wear #NOT YET & #PRIDE clothing while at work. The superintendent says lawyers will have to decide the legality of all of this . pic.twitter.com/qoyj8oumR9

A majority voted for the ban, but the entire board was not in favor of banning LBGTQ+ and BLM-related apparel and signage. Other board members, including Brandy Penner, pointed out that the top five performing schools in the state had diversity coordinators and diversity statements, while districts that were struggling educationally had a “lack of anything to do with equity.”

Additionally, some board members against the ban noted that students weren’t given enough of a say in the decision, even though the ban impacts them the most.

According to the Associated Press, the board received over 90 public comments, of which 31 were heard. While supporters of the ban claimed the signs were “divisive,” some students who were bullied noted that they felt seen and supported by the signs and symbols.

“The quality of some of the stories that we heard should count more than just the number of emails that we received,” board member Ines Peña said while wearing a Black Lives Matter shirt and rainbow headband during the virtual meeting. “And I feel like that’s not being heard. The students are not being heard.”

“Black students and other kids of color are under attack in Newberg schools,” parent Tai Harden-Moore said according to KGW-TV. “I know this to be true because my son was called a n—– at school.” Harden-Moore explained to the Newberg school board that a BLM sign in a classroom can allow her son to feel like the classroom is a safe space, and a Pride flag can do the same for students who identify as LGBTQ+.

Aside from discussing the “political” signage ban, the board is also expected to meet on “replacement language” regarding the district’s anti-racism policy to examine the Oregon Department of Education’s “Every Student Belongs” policy, which, in part, “prohibits hate symbols, specifically three of the most recognizable symbols of hate in the U.S. —the swastika, the Confederate flag, and the noose,” the Associated Press reported.

Tuesday’s vote also goes against recent state efforts to support both Black students and LGBTQ+ students in the state. According to Oregon Public Broadcasting (OPB), the state Board of Education voted to stand with the BLM movement last October. The state even released a “success plan” earlier this year to ensure that students could feel comfortable in the classroom, no matter their sexual identity.

In response to the vote, the Legislative Black, Indigenous, People of Color Caucus released a statement on Thursday backing up school board directors who urged to delay the vote until all public commentary could be heard.

The statement read: ”Rushing through these decisions to restrict the symbols educators can display in classrooms weeks before the school year begins is divisive and wrong.”

Local congressmen are also condemning the board for even talking about a policy change, though they are not surprised by what’s happening.

“I mean at the national level, we’re seeing a trend of school boards rolling back anti-racism and anti-discrimination protections, which I believe is truly unacceptable,” Rep. Raul Ruiz said.

When the ban will be enforced has not yet been announced. According to the district’s superintendent, Joe Morelock, the district’s lawyers would need to review the new law before it is formally putting it in place.

“I won’t be able to enforce it as it is until we’ve gone through a bunch of legal review,” he said.