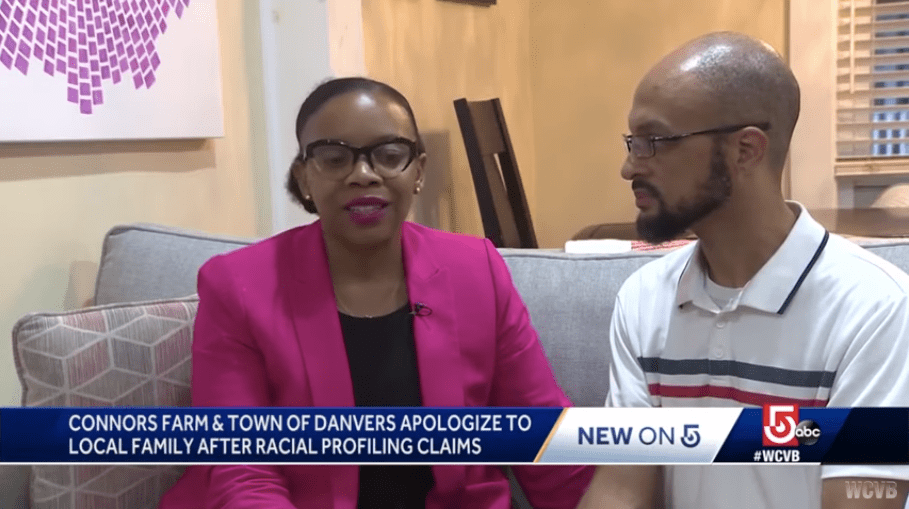 At first, the couple says the experience was fun and they received great customer service, with most of the staff being very “helpful.” The family even considered hosting their daughter’s birthday party at the orchard. Bowman says that as soon as they walked past the apple orchard facility, however, they were accused of stealing. “They decided to search my purse,” Bowman explained. “That was the moment where I realized that this wasn’t maybe about a few apples.”

“The manager never acknowledged that we had our bands on,” Jeff Myers, Bowman’s husband, a commercial real estate director, told the news outlet. “We paid to be there. We had a bag that we paid for, we had the big green cup that we paid for. We told them repeatedly, we were coming here to buy more stuff. And after all that, he still said, ‘It’s my job to prevent stealing.’”

All of this happened in front of the couple’s 18-month-old baby and 7-year-old child.

According to a letter Bowman and her husband posted online, the family had six too many apples, not in a pre-paid bag, that had been placed beneath their 1-year-old’s stroller. The apples toppled out of the bag and were sitting beside the bag in the stroller.

“I assumed we’d have a chance to pay for the extras in our final checkout,” the couple wrote in the letter. “With families being primary customers, surely, we couldn’t be the first to have excitedly over-picked by a few apples—six in our case.” The letter goes on to describe a security guard searching Bowman’s purse.

The farm first posted a statement to Instagram with an “apology” adding that they reserved the right to search all backpacks, strollers, and purses that exit the orchard. After a speedy—and appropriate—social media backlash, the farm shared another apology.

“We regret the incident that happened this past weekend,” the farm said in a second apology statement shared on Facebook. “We have extended our personal apology to the family. We do our best to train our employees to handle all customer issues with courtesy and respect at all times. We are taking further steps to ensure that staff will undergo diversity, equity, and inclusion training. Please know that everybody is welcome on our farm.”

Town officials also extended an apology via a statement, writing in part, “The Town extends its apologies for the unsettling experience the family had at a local business and for the comment made by a Danvers employee. Let us be very clear, discriminatory behavior has no place in Danvers, or in any community.”

In speaking to local outlet WCVB Channel 5 Boston, Bowman describes the incident as an “attack” on her character, adding that as a public leader, her reputation means a lot to her. The couple is most concerned about how the day affected their 7-year-old, however, with Bowman saying, “It’s the small moments that take place at the apple orchard that then have an impact on people’s lives, that shape them.”

The couple stressed this point in their blog post as well, writing, “By jumping straight to an assumption of theft, Connors Farm created a scene, harassing us and causing our 7-year-old to burst into tears, anguish that lasted well into the evening. We are left wondering, was it ever about the apples?”

You can check out an interview with the couple below.