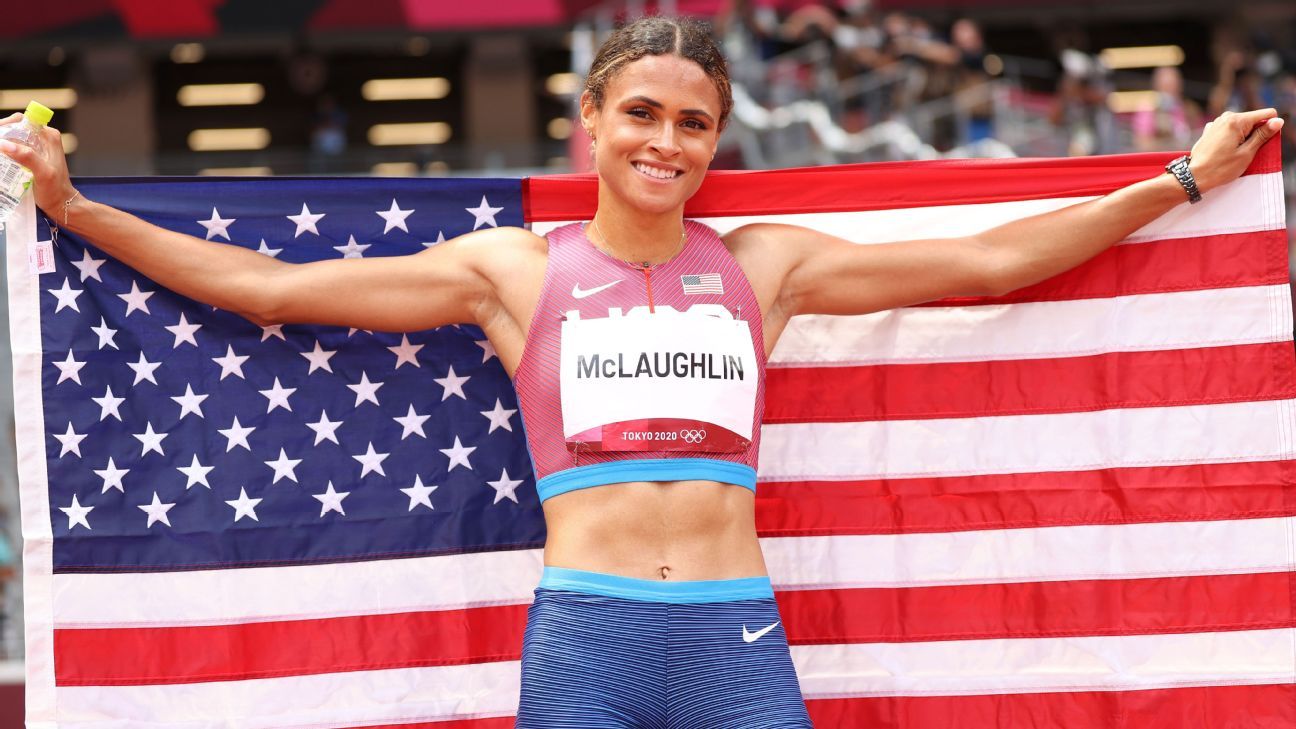 Sydney McLaughlin broke Dalilah Muhammad’s record in the 400-meter hurdles during Olympic trials, and the 21-year-old American broke her own record by nearly half a second in the Olympic final, finishing in 51.46, 12 hundredths of a second faster than Muhammad, to win her first gold medal.

Breanna Stewart, Brittney Griner and the U.S. women’s basketball team routed Australia 79-55 to advance to the semifinals, where Serbia awaits.

If you’re thinking that we probably have you covered with updates of all the Tokyo action as it unfolds, you’re not wrong.

USA’s Sydney McLaughlin set a new world record of 51.46 — her second record in two months — in the 400-meter hurdles, overtaking rival and defending champion Dalilah Muhammad to win her first Olympic gold medal. Muhammad won the silver medal in 51.58, which would have broken McLaughlin’s previous world record that she set during Olympic trials.

History on the mat

Breanna Stewart’s résumé is already filled with two WNBA titles, one WNBA MVP, four NCAA tournament titles (and MOPs) and one Olympic gold medal. With Wednesday’s victory over Australia, she moved one step closer to a second Olympic gold.

The 26-year-old Stewart scored 20 of her game-high 23 points in the first half as Team USA routed Australia 79-55 to advance to the Olympic semifinals, where Serbia awaits (Friday, 12:40 a.m. ET).

We have Stewie & the other team does not. Advantage us.

Tom Daley won a gold medal for Great Britain in the men’s synchronized 10-meter platform dive on July 26. What has he done in Tokyo since? Knit.

This is now a Tom Daley knitting thread! 🧶 pic.twitter.com/TUlyjmlHvy

Whatever this is…we need it. 🧶 pic.twitter.com/VFRmlVVFwR

Twelve-year-old Kokona Hiraki of Japan recorded a 59.04 thanks to a kickflip indy grab above the coping and a variety of lip tricks, grinds and aerial tricks, helping her earn silver. Thirteen-year-old Sky Brown of Great Britain won bronze.

Twenty-six-year-old American Devon Allen, who finished fifth in the men’s 110-meter hurdles finals at the 2016 Rio Olympics, is one step closer to an Olympic medal in Tokyo, finishing first in his semifinal heat, qualifying for Wednesday’s finals (10:55 p.m. ET). Allen finished his heat in 13:18 and celebrated with a few dance moves.

Not to be outdone, the world champion and the second-fastest man in the 110-meter hurdles, USA’s Grant Holloway, cruised in his semifinal heat. Favored to win his first Olympic gold medal during the finals, Holloway ran the fastest semifinal time (13:13).

Simone Biles won bronze on the balance beam in the last day of event finals, and her journey captured the attention of legendary artist Taylor Swift, who tweeted, “I cried watching YOU.”

I cried watching YOU. I feel so lucky to have gotten to watch you all these years, but this week was a lesson in emotional intelligence and resilience. We all learned from you. Thank you. https://t.co/VQxyeEf0mJ