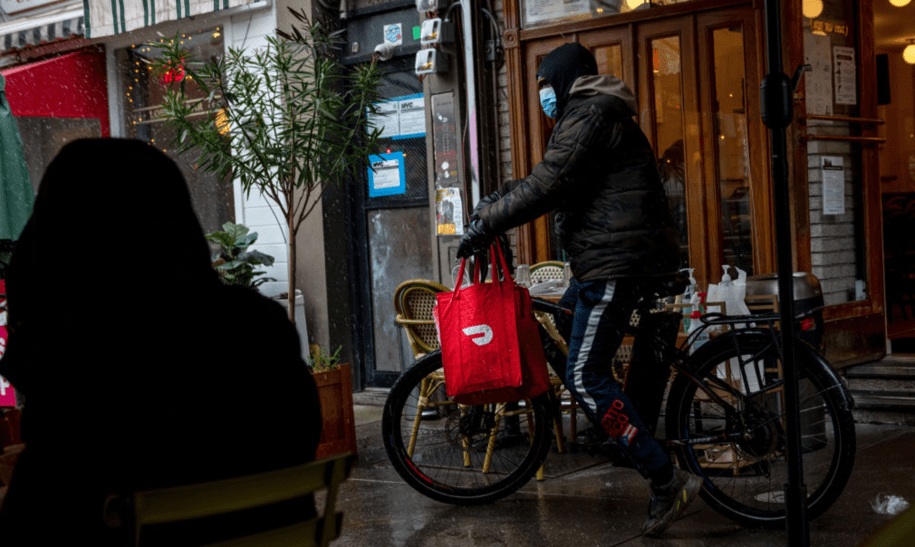 “Despite being recognized as essential workers, they have been denied basic workers’ rights and are continuously treated as disposable labor,” said Ligia Guallpa, executive director of the Worker’s Justice Project, in a statement to the press. “In an effort to defend their humanity and dignity, WJP members formed Los Deliveristas Unidos, a powerful grassroots movement of app-based food delivery workers to win today’s historic legislative protections that will give them more control over their labor and livelihood.”

In early September, LDU and WJP released a joint report on the working and living conditions of New York City app-delivery workers by surveying 500 app-based couriers doing deliveries in the city, arranging focus groups of workers, and conducting individual interviews. The report found that delivery workers routinely face assault, abuse, wage theft, bike theft, withholding of tips, denial of bathroom access, unjustified deactivation of their app accounts, and even death in the streets, resulting from traffic accidents and violent bike robberies. Workers risked their lives every day during the pandemic to deliver food without protection. Things were further exacerbated during Hurricane Ida when apps such as Grubhub, DoorDash, and Relay refused to pause service and incentivized workers to make deliveries during life-threatening conditions.

“The workers came up with solutions and suggestions on how to tackle the problems they were facing. This was included in the legislation,” explained Hildalyn Colon-Hernandez.

But LDU and WJP’s work isn’t done yet. According to Colon-Hernandez, LDU will be continuing its fight for better working conditions by concentrating on safety. Delivery workers are routinely victims of assault and theft, and she says NYPD has been lax with investigating these issues seriously and holding people accountable.

“I just received a phone call from one of our workers’ wives. He was hit by a car on Sunday and died leaving three children behind. Who will take care of them now?” said Hildalyn Colon-Hernandez.

At the beginning of the report, the names of 17 delivery workers who lost their lives on the job are listed in commemoration. App-based couriers still face dangerous working conditions and lack access to medical coverage, workers’ compensation in case of injuries on the job, and workplace health and safety regulations, since they are classified as independent contractors.

“Some of the delivery companies have covered medical costs in the past, but it’s very minimal,” Colon-Hernandez said. “We [WJP] have legal teams working on this, but what about workers who don’t have these resources?”

Jennifer Chowdhury is a journalist and writer dedicated to human rights reporting with a special focus on women of color around the world whose voices are stifled by patriarchy, systematic racism, and socioeconomic burdens. She spent two years reporting on the Rohingya refugee crisis in Bangladesh and a lifetime of witnessing immigrant communities in New York City. Her work has been featured in The Washington Post, NPR, The Guardian, The New York Times, Elle magazine, and more.