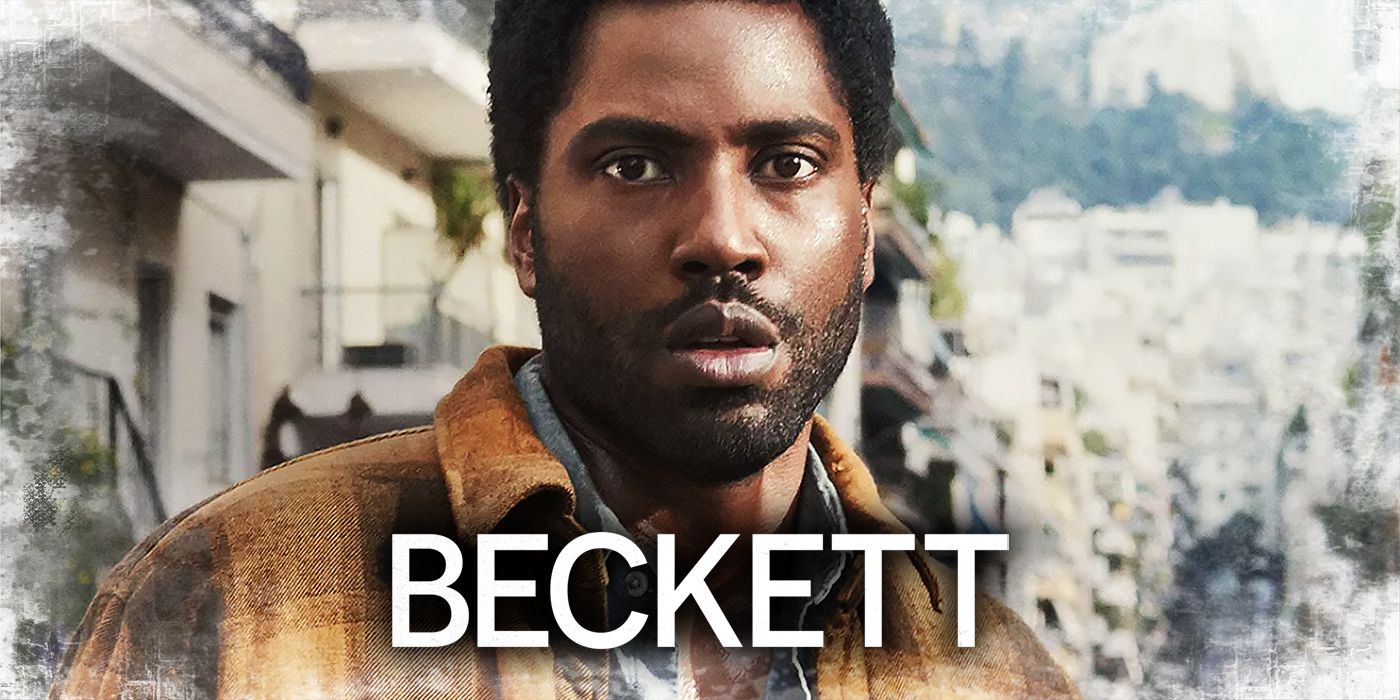 Netflix has routinely dropped massive budgets on action films featuring famous stars. Compared to Extraction, The Old Guard, Spencer Confidential, and 6 Underground, the John David Washington star vehicle Beckett is an outlier. Not pitched as a potential franchise starter, Beckett is mostly contained to intimate locations and only gradually unveils its stakes as the anxiety builds.

Washington’s titular character Beckett and his girlfriend April (Alicia Vikander) are on vacation in Greece as a political insurrection begins. The couple fears for their safety and flees to the U.S. embassy, but a sudden car crash leaves April missing and Beckett stranded in a foreign hospital. Beckett searches for clues to April’s wearabouts, but he faces a language barrier and is caught between the competing ambitions of scheming American spies and untrustworthy Greek revolutionaries.

The film’s third act riot sequence brings all these pressures to a focus. Beckett is caught in an international conflict he has no stake in, searching for answers when no one is clear in their motivations. He’s no longer searching for answers or even vengeance; it’s simply a mad dash to survive. While it doesn’t end with a climactic face off or provide a jaw dropping reveal, Beckett’s untraditional ending sequence is one of the best action of the year.

Beckett’s emotions are diffused during the riot chase because he’s been thoroughly traumatized already, as April’s death is established early on. Among Beckett’s ongoing mysteries, the cause of April’s death is actually cut-and-dry: Beckett fell asleep at the wheel during their midnight escape. It’s an effective weaponization of Vikander that shockingly kills off an established star and changes Beckett’s emotional state ahead of the climax. Beckett is desensitized to shock, and as he’s not seeking revenge or trying to unmask April’s killer. The outcome of the rebellion won’t bring him closure either way.

RELATED: John David Washington on ‘Beckett,’ Playing the Antithesis of John McClane, and How Many Friends Asked Him to Explain ‘Tenet’

Beckett’s emotional fluctuation forces the film to keep upping his adrenaline as it reaches the ending. Beckett is grieving and considers suicide, reflecting that he also should’ve been killed in the accident. Washington is spared only a few moments to process his heartbreak at earlier stages, as he’s constantly met with enigmatic characters who attempt to pull him into their causes. Ending with an extended chase sequence is an effective conclusion for his character arc because it prevents him from processing his guilt.

The resistance turmoil has been foreshadowed throughout Beckett, and the chaos as protestors clash with law enforcement finally depicts the tension that’s been bubbling beneath the service. Only scant details have been revealed about the conflict through news clips and the limited information given to Beckett by U.S. embassy agent Stephen Tynan (Boyd Holbrook), so the viewers know as much as Washington does about the escalation.

Beckett utilizes the Netflix budget by focusing on capturing the authenticity of the environment. Violence doesn’t immediately begin; the police slowly goad the angry mob as both sides flaunt their weapons. There’s time taken to develop the activist sect led by Vicky Kreips’ character Lena, adding to the emotional weight of the face off.

The sequence is kickstarted by an exciting reveal when Tynan outlines a connection between local politicians and the mafia, facilitated by American spies. Holbrook does a great job at playing shady throughout, but his sudden urge to eliminate Beckett still comes as a shock. It gives Beckett a reason to be there, as he attempts to elude his pursuer within the chaotic backdrop before facing him in a brutal, bare-knuckled scuffle. It’s a terrific fight where neither character is particularly used to combat; Beckett is a civilian and Tynan is more apt at deception than assassination. It’s not over choreographed either, as both men fight tooth and nail before Beckett comes out victorious.

Beckett’s attempt to hide moves the chase between locations. He rushes through alleys and rooftops as the corrupt Greek police officer Xenakis (Panos Koronis) tracks him. Weaving in and out of different areas shows the extent to which the rebellion has infected the city and keeps Beckett on his toes, as he has no idea where he is or where he’s going. There’s a lack of fluidity that’s refreshing; Washington has the physicality of an action star, but he convincingly takes punches and gets brutalized.

When finally reunited with Lena, Beckett’s decision to help her rescue the kidnapped son of a politician isn’t an act of nobility, but of instinct. The kidnapping subplot is one of the latent enigmas Beckett has questioned, but he doesn’t have a strong emotional connection to the child or his fate. It’s a great moment for the character that temporarily gives him a cause to fight for, even if he doesn’t fully believe in it.

Beckett’s concluding set piece ends on a uniquely ambiguous note that doesn’t bring the character the closure he seeks. While the rescue may have ended his temporary problem, he’s still trapped among strangers within a fragile political state. Emotionally, he’s still gutted; after going through hell to stay alive, Beckett still places the blame for April’s death squarely on himself.

Netflix churns out so many similar-sounding action films that it’s hard to distinguish one from another, but Italian filmmaker Ferdinando Cito Filomarino crafted an emotional pursuit thriller with a terrific lead performance from Washington. Beckett subverts the formula of a standard doomed travel movie, and its unconventional end set-piece closes it off perfectly.