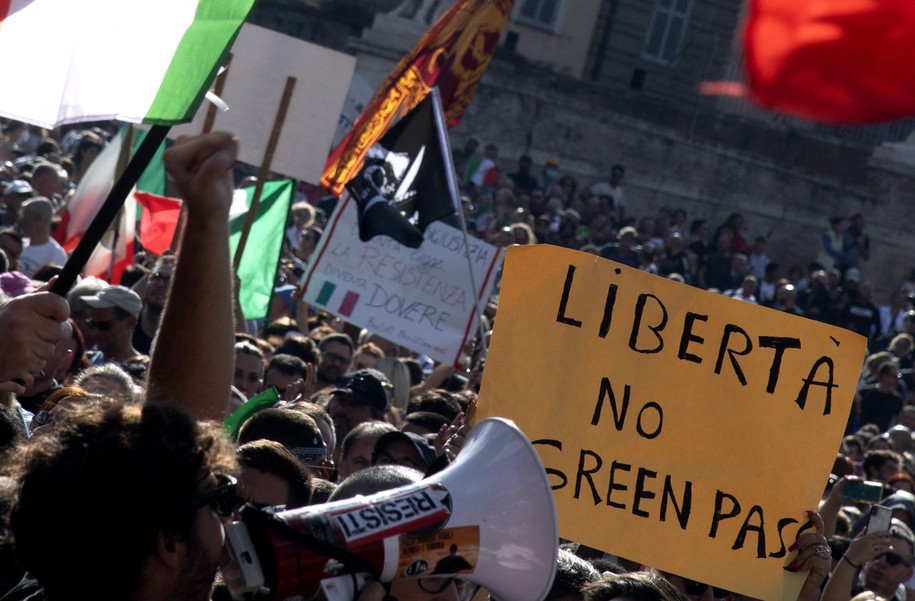 Saturday’s mini-insurrection in Rome followed the model we have seen repeatedly now. Organized as a protest against Italy’s new requirement for a “Green Pass” proof of vaccination in order for employees to enter their offices, thousands of people marched through the city’s historic center and clashed with police. Among the primary instigators of the street violence were members of the neo-fascist political group Forza Nuova (New Force), who in addition to carrying weapons also tossed smoke bombs with abandon.

Some of these protesters were armed with sticks and metal bars, and appeared to deliberately target the headquarters of CGIL, the nation’s largest labor union, which publicly supported (albeit in lukewarm fashion) the Green Pass requirement. A group of protesters smashed their way into CGIL offices near Villa Borghese and trashed its interior and office equipment. They were allegedly incited by Giuliano Castellino, the leader of Forza Nuova, who reportedly urged the crowd to ransack the CGIL offices.

“It was a fascist squad attack, and it is unacceptable,” CGIL head Maurizio Landini told supporters in front of the union offices on Sunday.

Rioters also attempted to enter the grounds of the Chigi Palace, which is the residence of the prime minister, Mario Draghi, who issued the Green Pass order. Riot police repelled them, but they were unable to prevent a mob from entering a hospital’s accident and emergency unit and trashing equipment there.

On Sunday, Italian police arrested some of the leaders of Forza Nuova, including founder Roberto Fiore. Lawmakers began calling for the group and others like it to be banned, saying the protests represented “an attack on democracy,” adding violence “as a method of political struggle can never be tolerated.”

The Democratic Party on Monday filed a motion in parliament calling for the government to dissolve neo-fascist groups, saying it is time to “end ambiguity about fascism” in Italy.

Italian journalist Leonardo Bianchi of VICEItaly told Daily Kos that the opportunistic convergence of far-right elements around the pandemic measures has been ongoing for well over a year and is highly decentralized, mainly occurring in areas where fascists are active and militant, while other local COVID-measure opposition has arisen without them.

“Just to give you an example,” Bianchi wrote via direct message, “in Trieste, which is in the northeast of Italy, the bulk of the ‘no Green Pass’ movement is formed by port workers (who are not fascist, of course). In Rome, Forza Nuova has a small but very militant presence, and it has been at the forefront of this kind of protests. And since they’re fascist, they do what they have always been doing since the 20th century: assaulting unions and trashing their headquarters.”

He noted that Forza Nuova is actually a very small party that is in perpetual disarray due to internal infighting, and explained that their purpose in attaching themselves to the anti-pandemic-measure crowds is “to capture the maximum amount of media exposure.”

“So I would say that Forza Nuova (and the others who attacked CGIL’s HQ) exploited the situation to target ‘the Union’ as a whole, accusing unions of “treason” (and stuff like that),” Bianchi said. “So it’s a mixture of ‘COVID insurrections’ and old-style ‘squadrismo’.”

He observed that “all the other fascist parties in Europe” have adopted similar tactics. “There are lot of similarities among these kind of COVID protests, from Germany to Australia,” he wrote. “Indeed, this ‘no Green Pass’ movement in Italy is very similar to Querdenken in Germany.”

Lateral thinking—which means “lateral thinking,” or “thinking out of the box”—is similar to American anti-pandemic measure movements in that it includes pandemic skeptics, anti-vaxxers, and anti-lockdown protesters, all of whom claim that federal and regional laws aimed at halting the spread of COVID-19 infringe on citizens’ liberties. The movement’s followers are always quick to emphasize their peacefulness and loyalty to the German Constitution—while at the protests they organize, neo-fascists bearing the imperial Reichskrieg flag and chanting antisemitic slogans are featured participants.

While the movement claims to be primarily concerned with government overreach, its entire milieu is fueled by disinformation and conspiracy theories. It draws on conspiracism with a more global base, particularly QAnon and its focus on supposed deep-state plots to maintain and increase the power of a ruling elite. It has been a hotbed of pseudoscientific positions arising from existing anti-vaccination and New Age communities.

All these movements, as William Callison and Quinn Slobodian recently explored at Boston Review, share the conviction that all power is a form of conspiracy:

Public power cannot be legitimate, many believe, because the process of choosing governments is itself controlled by the powerful and is de facto illegitimate. This often comes with a dedication to disruptive decentralization, a desire for distributed knowledge and thus distributed power, and a susceptibility to rightwing radicalization. Diagonal movements trade in both familiar and novel fantasies about elite control. They attack allegedly “totalitarian” authorities, including the state, Big Tech, Big Pharma, big banks, climate science, mainstream media, and political correctness. They are, in many ways, descendants of the extra-parliamentary New Social Movements of the 1970s but with the idealism and desire for collective action or decommodification burned down to the wick of a defense of autonomous decision-making.

Most significantly, the purpose they share in common is “storming the Capitols of power”. This is why they have turned to mostly localized “mini-insurrections” and street brawls supposedly revolving around various local controversies, most of them related to COVID-19 restrictions, as well as assaults on health care workers and people attempting to enforce the restrictions.

The model for this has been the Proud Boys’ chief strategy since Jan. 6: operating on a purely local level, consistently hijacking causes and events organized by local activists and communities. But as intelligence analyst Kristopher Goldsmith recently explained on MSNBC, these mini-insurrections are in fact a form of preparation for a much more overwhelming event farther down the road.

“Every failed coup is just practice,” Goldsmith said. “What’s, I think, most disturbing, to people now is that it’s become out in the public.”

He noted that the far-right militia group Oath Keepers, who played a key role in the Jan. 6 insurrection, have in fact increased their recruiting efforts in the months since.

“The Oath Keepers are an organization that’s primarily vying for not just military service members, veterans, but also, police,” he warned. “These are people who have a warped sense of patriotism, who believe that fighting against the government, against their fellow Americans is somehow patriotic … What’s disappointing to me is to see people using .gov and .mil e-mail addresses to sign up to be one of these members of an unlawful militia.”

The constant drumbeat of mini-insurrections, he said, pose a real threat to democratic institutions. “Right now, everyone from Proud Boys to the Oath Keepers to QAnon influencers are trying to encourage their members, their followers, their maniacs to show up at school board hearings and intimidate members so that those people resign,” he said. “That creates vacancies so that they can run for elections and win.

“It’s not just a spontaneous thing. It’s completely organized. And it’s not just organized by extremist groups, it’s organized by some of the most well-moneyed and flashy PACs, like Turning Point USA.”