MS Dhoni turns it on at the close, puts CSK in IPL 2021 final 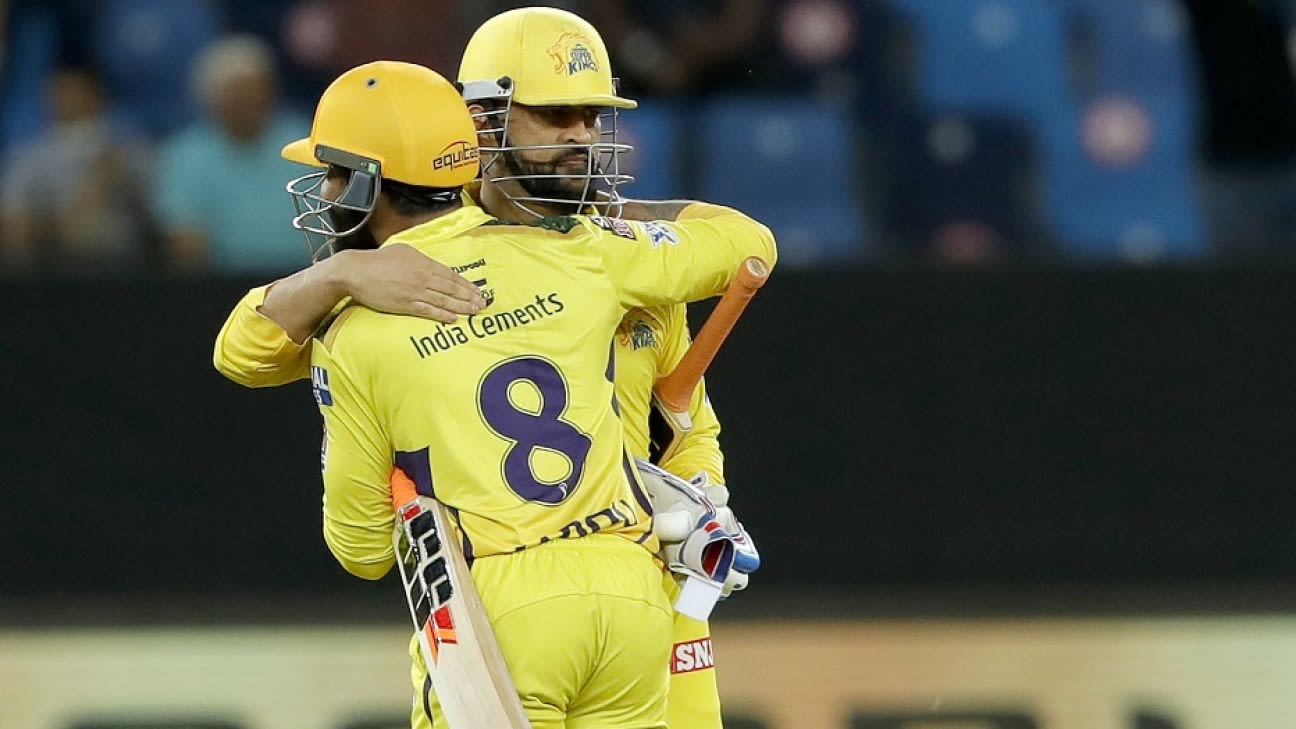 Ruturaj Gaikwad and Robin Uthappa put on 110 for the second wicket and MS Dhoni rolled back the clock with a finishing act as Chennai Super Kings qualified for their ninth IPL final, beating league-stage toppers Delhi Capitals in Qualifier 1.

Sign up for ESPN+ and catch all the action from the IPL live in the US. Match highlights of Chennai Super Kings vs Delhi Capitals is available here in English, and here in Hindi (US only).

After the second-wicket stand had laid the platform for Super Kings in a chase of 173, the middle order stuttered before Dhoni came in with Super Kings needing 23 off 11. He played his first ball with them needing 19 off 9, and missed it. The next ball from Avesh Khan was clobbered over the midwicket boundary, and Dhoni then had strike against Tom Curran with 13 to get off 5.

Curran was Capitals’ most successful bowler of the night at that point, but boundaries from Dhoni – even if one was an inside edge – off the next two balls put the pressure squarely on him; that resulted in a wide, and eventually the half-tracker slower ball that Dhoni swung to the leg-side boundary to seal the win with two balls to spare.

Uthappa brings out the classics, Gaikwad takes it deep

Uthappa’s promotion to No. 3, the position from which he has scored many IPL runs, turned out to be a crucial decision for Super Kings. He walked in during the first over, with nearly the entire powerplay at his disposal, and made the best of his favourite phase of the innings. It was a typical Uthappa knock, studded with elegant drives on the rise, deflections behind the wicket, and dominant punches over the infield. With Gaikwad going about it in his usual languid manner to begin, Uthappa made sure Super Kings scored at a healthy rate. Five of his seven boundaries and two of his three sixes came in the powerplay, with two of each coming in a 20-run Avesh Khan over to end the powerplay.

Rishabh Pant turned to R Ashwin in the middle overs and for a brief period, he played a part as the Capitals stopped the flow of the second-wicket partnership; at least twice from Ashwin, that meant a literal stop, when he pulled out of his delivery stride to Gaikwad’s annoyance. But, in his second over, Uthappa reverse swept Ashwin and then hit him over his head next ball to put an end to his night.

Gaikwad then began reaping the rewards of his method: his acceleration came, as it often does, in the second half of the innings. His 50-ball 70, with typically well-placed boundaries, and a lot of smart running, took Super Kings all the way into the 19th over even as their middle-order shuffles – Shardul Thakur at four, Ambati Rayudu ahead of Moeen Ali at five – had begun failing.

Iyer’s spark in the field brings Capitals back

Curran came in as a replacement for specialist batter Ripal Patel, and bowled two economical overs to check Super Kings’ scoring rate. In his third over, the 14th of the innings, he had Uthappa skying one to long-on’s right. Shreyas Iyer sprinted towards it, managed to keep his composure despite Axar Patel running across him from deep midwicket, caught it, lobbed the ball up, stepped over the rope and returned to the field to complete the catch. That over ended with Thakur finding Iyer at long-on for a second-ball duck.

Super Kings were still favourites at this point, needing 56 off six overs, but Iyer was there again to turn the match Capitals’ way. A mistimed Gaikwad pull to his right at long-on offered the chance of a second run for Super Kings, but Iyer’s sprint to the ball and then a rapid throw – while he was nearly off balance – to the non-striker’s end meant Rayudu’s call had quickly begun to look precarious. The bowler, Kagiso Rabada, wasn’t in the best position running back to the stumps, but managed to grab the one-bounce stinger from Iyer and relay it onto the stumps to catch Rayudu short. With the required rate climbing, and only one boundary coming off each of the next two overs, Iyer’s fielding exploits nearly turned into defining moments for Capitals. But then came Dhoni…

Dhoni had said at the toss that his team had been finding the ball to be stopping and the pitches to be two-paced when they bowled first. That seemed to be the case here again as Prithvi Shaw began his innings with three streaky boundaries – one a top edge for six – behind the wicket. After the third one, it seemed he had figured the pitch out though, punching Deepak Chahar elegantly on the rise through point in the third over. He closed off that over – worth 18 runs -with a flick past short fine and a vicious cut to beat deep point.

That was followed by two sixes off a Shardul Thakur over, in which he was also dropped by Dhoni, diving one-handed to the right trying to get to a late dab. Josh Hazlewood kept plucking away at the batters at the other end, first getting Shikhar Dhawan and then Shreyas Iyer, but Shaw kept the attack going even when spin came on. He cut Ravindra Jadeja to get to fifty and then swept him against the turn – at the end of that over, the ninth, he had made 57 of Capitals’ 74 runs. Eventually, he fell looking to go with the turn against Jadeja, chipping straight to long-off the over after a promoted Axar Patel had fallen. Capitals were four-down just past the halfway stage, but had a lot to thank him for – his 60 off 34 had ensured they weren’t behind the rate.

That allowed Rishabh Pant and Shimron Hetmyer – the Capitals’ last specialist batting pair – to play risk-free cricket as they tried to stretch the innings as deep as possible. Their 83-run stand for the fifth wicket came off 50 balls and gave Capitals a bigger total than had seemed possible after Shaw’s departure.

Varun Shetty is a sub-editor at ESPNcricinfo