Morning Digest: How will redistricting unfold in every state? Our new guide tells you 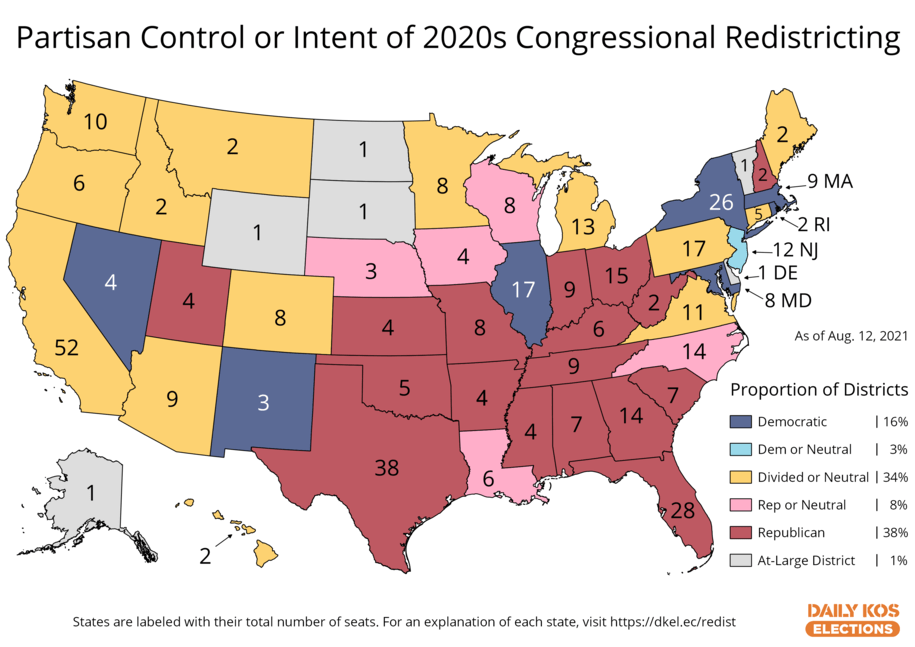 With Democrats still in charge of Congress and the White House, they have the opportunity to ban congressional gerrymandering nationally, and House Democrats in fact passed a bill to that effect earlier this year. However, moderate Democrats such as Sen. Joe Manchin who have so far refused to curb the filibuster are standing in the way of passage in the Senate, since Republicans oppose the measure in lockstep. While Senate Democrats are reportedly working on a compromise with Manchin and his fellow holdouts, time is fast running out to pass reforms that can stop new gerrymanders from going into effect next year.

With the redistricting landscape therefore likely set for next year’s elections, our new guide delves into how we expect it to play out in every state, explaining the process and the likely outcome in each. We’ll continue to add to this guide as states make their way through the redistricting process over the course of 2021 and 2022, so be sure to bookmark it.

● MI-Gov: Firmly tamping down on speculation that she might seek to challenge Democratic Gov. Gretchen Whitmer next year, former Trump Education Secretary Betsy DeVos said on Tuesday, “I am not running for governor.” That leaves former Detroit Police Chief James Craig as the most prominent Republican in the race, though prior to Craig’s entry, anti-lockdown activist Garrett Soldano had raised the most of any GOP candidate.

● NV-Gov: Venture capitalist Guy Nohra, a first-time candidate, has joined the increasingly busy Republican primary in Nevada’s race for governor next year with a pledge to put “seven figures” of his money into his campaign, according to Fox News. In a kickoff video, Nohra dropped all the typical GOP buzzwords, saying he wants to teach kids “how great America is while keeping critical race theory out” and “expose the election fraud we all know is there.”

● VA-Gov: So far, every single public poll of the Virginia governor’s race has come from Republican pollsters, and every single one has shown the Democrat, former Gov. Terry McAuliffe, in the lead. So, too, with the latest entry, a late-July survey from co/efficient on behalf of a group called Conservatives for Clean Energy that finds McAuliffe ahead of Republican Glenn Youngkin by a 45-40 margin.

If anything, the numbers might understate McAuliffe’s standing, since respondents give Joe Biden just a 47-46 job approval score; in FiveThirtyEight’s national average, Biden has a 50-43 rating, and Virginia is now decidedly to the left of the country as a whole.

What’s particularly concerning, though, is the overall dearth of polling: Four years ago, there’d been 20 polls released by this date in the previous race for governor, including several from independent pollsters. This cycle, we’ve only seen five so far, and none from an independent outfit.

● AZ-09: Republican Tanya Wheeless, who was a staffer for former Sen. Martha McSally, announced a bid this week for Arizona’s 9th Congressional District, which hasn’t hosted a competitive race since its very first race after coming into being a decade ago. (It went for Joe Biden 60-37 last year.) Redistricting, however, looms of course, and with Arizona’s independent commission drawing new lines, the final outcome is particularly hard to predict. A host of minor GOP candidates have previously filed to take on Democratic Rep. Greg Stanton, none of whom have raised real money.

● CA-39: Former Democratic Rep. Gil Cisneros has been confirmed as Undersecretary of Defense for Personnel and Readiness, a post to which Joe Biden nominated him in April. Cisneros, who lost his re-election bid last year, had expressed interest in a rematch, but unless he’s planning the briefest of stints at the Pentagon, this career move takes him out of the running.

● FL-10: Activist Maxwell Frost, who served as the national organizing director for the gun safety group March For Our Lives, has joined the crowded Democratic primary for Florida’s open 10th Congressional District. In his kickoff, Frost, 24, touted the fact that he’d be among the first members of Generation Z in Congress. He also launched his campaign with an endorsement from David Hogg, a survivor of the 2018 Parkland school shooting and a founder of March For Our Lives.

● FL-20: Eleven Democrats are running in the special election in Florida’s 20th Congressional District, where candidate filing closed on Tuesday. The district, a majority-Black seat that takes in otherwise unconnected chunks of West Palm Beach and Ft. Lauderdale via a large inland swath of the Everglades, has been vacant since Democratic Rep. Alcee Hastings’ death in April. It will remain so until next January after Republican Gov. Ron DeSantis put the election on a timetable twice as long as those for seats vacated by Republicans in recent years.

But because of the district’s deep blue lean—it voted for Joe Biden 77-22 last year, according to Daily Kos Elections’ calculations—the most important contest will be the Democratic primary, which is set for Nov. 2. The field features a large number of notable candidates, most of whom are local politicians and recently had to resign to run under Florida state law:

Thanks to $2.3 million in self-funding, Cherfilus-McCormick leads the fundraising race, while Holness has raised the most from donors so far, $305,000. A survey last month from progressive pollster Data for Progress found Holness edging out Sharief, who has lagged in fundraising, 17-14, with 29% undecided.

● MO-07: Physician Sam Alexander, who’d been considering a bid, just became the first notable Republican to enter the race for Missouri’s 7th Congressional District, which just became open last week thanks to Rep. Billy Long’s newly launched campaign for Senate. A large number of Republicans have also expressed interest in running for this conservative district in the southwestern corner of the state, which went for Donald Trump by a hefty 70-28 margin.

● WI-03: Roll Call’s Stephanie Akin, citing an unnamed Democratic operative, mentions several possible candidates who could run to replace Rep. Ron Kind, who announced his retirement on Tuesday. They include state Sen. Brad Pfaff, former state Sens. Jennifer Shilling and Kathleen Vinehout, and former state Rep. Dana Wachs. Meanwhile, local political science professor Joe Heim tells WIZM he thinks state Reps. Steve Doyle and Jill Billings could get in, while also taking note of Shilling and Pfaff. There’s no word from any of these potential contenders, however, as to whether they’re interested.