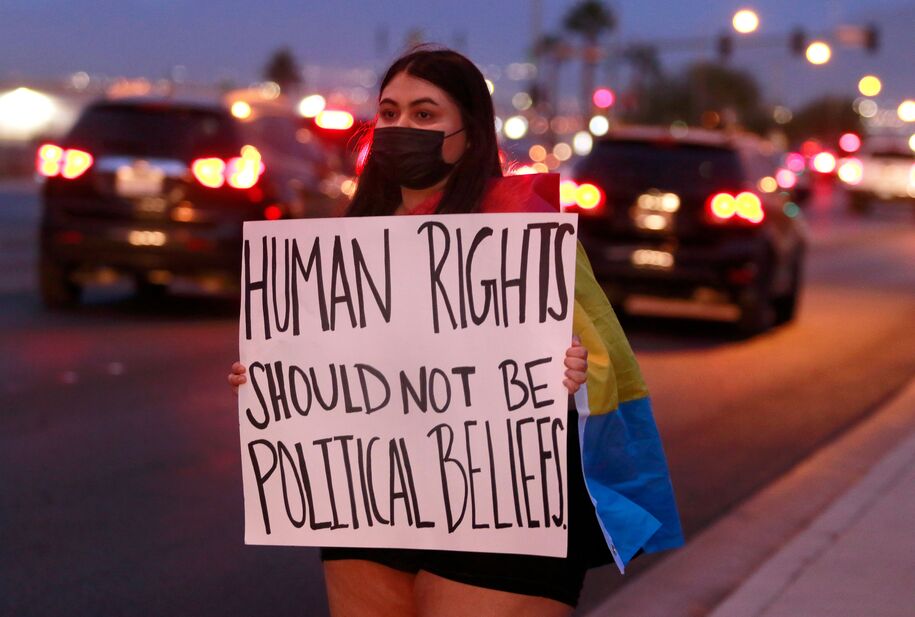 Wallis was employed at the school for less than a month before resigning. As reported by The Kansas City Star, the drama and speech teacher hung the flag on a bookshelf, as well as a sign that read “in this classroom, EVERYONE is welcome” in order to let students know they could come to him for help. After a parent complained, he took down his flag and sign. Wallis said more parents complained, however, after he told students they could find another classroom if they were uncomfortable with him or their LGBTQ+ peers.

That’s where the letter came in. Wallis was then directed to sign a letter agreeing not to discuss sexuality or gender with students.

“Our classrooms cannot become a personal platform for pushing one’s personal agenda,” the letter from Superintendent Jim Cummins, as supplied to the Springfield News-Leader, reads in part. “Your position in the Neosho School District is to teach speech and drama classes. You were hired because we believe you were the best candidate to do such.”

“However,” the copy reportedly reads. “If you are unable to present the curriculum in a manner that keeps your personal agenda on sexuality out of your narrative and the classroom discussions, we will ultimately terminate your employment.”

Wallis detailed his experience in a lengthy Twitter thread. Wallis claims the Pride flag hanging in his classroom was compared to hanging a Confederate flag, and that a parent called the school to complain that Wallis was going to teach their child to be gay. That’s obviously ludicrous, but Wallis adds that he didn’t even teach the students about the flag; it was just there as a signal of support.

At the beginning of the school year, I had two signs above my whiteboards that read “In This Classroom EVERYONE is Welcome” and an LGBTQ+ pride flag on my bookshelf.

This was an attempt to make my classroom more open and welcoming for all of my students, and nothing was ever taught about the flag because it stood there as a reflection of my classroom as a safe space for my LGBTQIA+ students.

According to Wallis, a student asked why the flag had been removed, and he explained why. He then let students know if they weren’t comfortable with LGBTQ+ peers, they could be taught by another teacher, in another classroom. Three more parents complained to the school, which Wallis says led to his being directed to sign a letter specifying he would not discuss either his own sexuality or human sexuality in the classroom. As Wallis points out himself, teachers and staff very regularly discuss their sexuality with students.

How? Think about how often you see someone put a picture of their family, wedding, or vacation on their desk. How often do adults encourage students to share about their winter or summer break and include examples from their own lives? Not always, but often, people will use gendered pronouns or language to signal their relationship or orientation. It’s only surprising for people to think of that as discussing one’s sexuality because we see cisgender, heterosexual relationships as the norm, and LGBTQ+ ones as different.

What can Wallis do at this point? He’s filed a complaint with the U.S. Department of Education’s Office of Civil Rights. Missouri does not ban anti-LGBTQ+ discrimination. The school district also doesn’t include sexual orientation or gender identity in its nondiscrimination policy.

“There is never a problem when a heterosexual teacher displays pictures of themselves and their spouses in a classroom but I have a flag and all hell breaks loose,” Wallis wrote. “My administrators chose to believe the bigotry of parents over their building’s teacher. To say I am devastated is an understatement.”

If this story sounds oddly familiar, it’s likely because Daily Kos recently covered a different teacher under fire over her Pride flag. A high school teacher in California was removed from her classroom after a TikTok video of her joking about telling students they could pledge allegiance to the Pride flag went viral and angered parents and the conservative internet at large. We also recently covered the gay volleyball coach who said he was forced to resign because of his sexual orientation, spurring students to protest outside of the school in support of him.