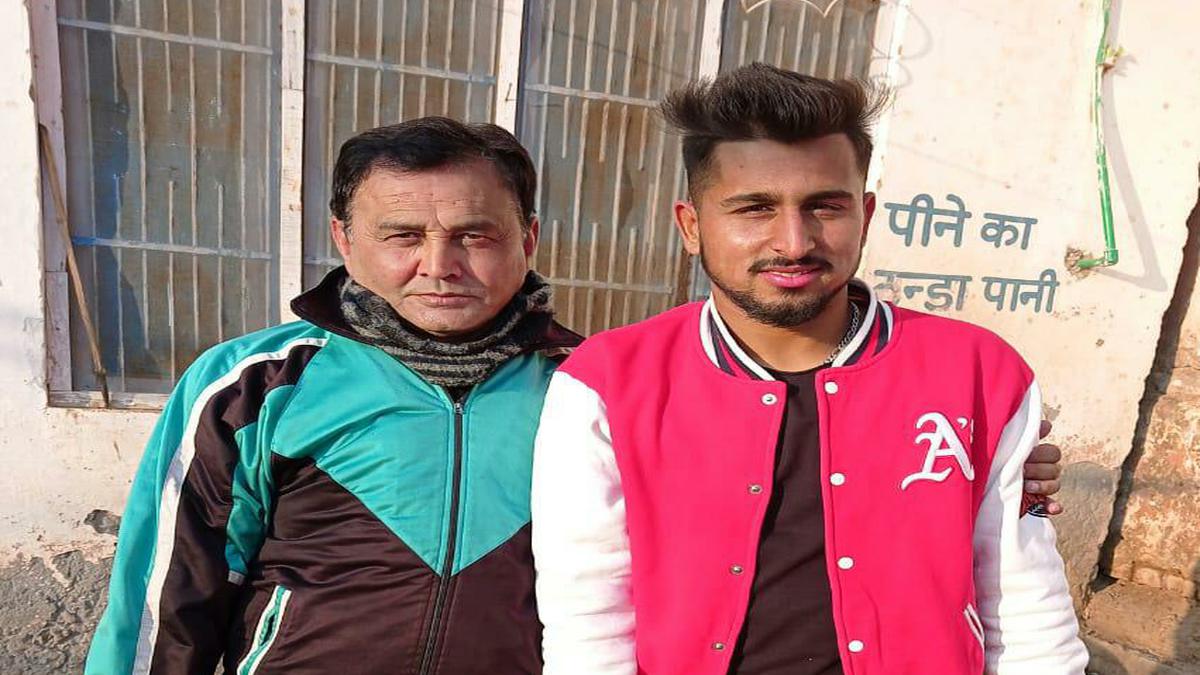 When Umran Malik travelled to the United Arab Emirates with the Sunrisers Hyderabad squad in the first week of September, little did he know that he would soon make his Indian Premier League debut.

This was his second stint with the franchise as a net bowler, and this time too, he was hoping to have some good time at the nets. However, things changed quickly for the 21-year-old as he was named a short-term replacement for T. Natarajan – who contracted COVID-19 soon after reaching Dubai.

While he had to warm the bench in the first few games of the second leg, Malik was handed the cap on Sunday against Kolkata Knight Riders and the young fast bowler from Gujjar Nagar in Jammu made heads turn with his speed.

Malik clocked 146-plus speed in the very first over, and he entered 150s twice on the speed gun – the only Indian to have done so in the IPL. While the cricket fraternity was in awe of his speed, Malik remained calm and composed, thus finishing his four overs, conceding 27 runs.

Even though he remained wicket-less, Malik made life difficult for Kolkata Knight Riders batters with sheer speed and the fact that seasoned campaigners like Nitish Rana and Shubman Gill struggled to tackle him, proved that this young gun with athletic body, strong action and raw pace is here to stay.

As the cricket pundits were excited with this new talent, sitting far away in Jammu, Randhir Singh Manhas was happy to see his ward come a long way. A coach at the Jammu and Kashmir Sports Council, Manhas saw Malik for the first time when he was 17. The rookie fast bowler had come to the Maulana Azad Stadium in Jammu – where the Sports Council runs a cricket coaching centre – to train under Manhas.

“Initially, he was not quite serious about the game. He would turn up one day and then disappear for three days. And again, after a week or so, you would see him bowling at the nets. He had passion for the game, but did not take things seriously,” Manhas told Sportstar.

Class X drop-out, who had to wait for his turn

While Manhas was impressed with his speed, he told Malik that he should be serious and disciplined in a bid to pursue his dreams. “He was a raw talent, who had immense potential but needed some guidance. He would clock 145-plus at the nets and we knew that if he is mentored properly, he can go far,” Manhas, who is popularly known as ‘Rajan Sir’ in the local cricket circuit, said.

A few months later, Malik caught the eye of the selectors and was chosen for the U-19 Jammu and Kashmir team. However, he hardly got any game time and had to mostly warm the bench. “They did not give him a longer rope. So, he was disappointed, but then, for us, the challenge was to make sure that he did not lose the plot,” said Manhas.

He would regularly play tennis ball cricket and feature in the local tournaments, which helped him increase his speed. Coming from a humble background, playing cricket was never easy, but his father – who runs a fruit shop in Gujjar Nagar – encouraged his son to continue with cricket. “He is a class X drop out and all he did was just play cricket. He has elder sisters and he is the only son in the family, so they were very supportive and that helped him play freely,” Manhas said.

The coach also remembers how former India stumper Ajay Ratra was impressed with Malik, when he saw the latter at the nets. “Ratra was the coach of Assam and ahead of a Ranji Trophy game, Umran was one of the net bowlers. Watching him bowl with such a speed, Ratra inquired why the selectors were not playing him for Jammu and Kashmir…”

Manhas had no answer then. Even though he encouraged his ward, at the back of his mind, even he had doubts whether Malik will actually make it to the Jammu and Kashmir squad anytime soon.

But things slowly changed when former India all-rounder Irfan Pathan took charge as the mentor of the Jammu and Kashmir team. “Irfan being a top-level fast bowler, he saw potential in Umran and they started mentoring the young cricketers and that boosted his confidence,” Manhas said.

Pathan remembers the first time he saw Malik in a camp in Jammu. “What struck me was his pace, but back then, he would jump out a lot. So, we had to work a bit on his bowling action. That helped him gain control and it benefitted his bowling,” Pathan said.

In 2019, Pathan and the then Jammu and Kashmir coach Milap Mewada wanted to give him maximum game time in the training camp in a bid to prepare him for first-class cricket. However, with the state going into a curfew following the abrogation of Article 370, the training camp in Srinagar was disbanded and the players were sent home.

“Umran was one of the young prospects and our aim was to work with him in the camp and prepare him for the Ranji Trophy. But that did not happen. But all credit to him, he has worked really hard over the last few months and has been very impressive in the nets,” Pathan said.

“He has been a net bowler at Sunrisers for a while now and that has helped. This year, David Warner struggled while facing him at the nets and that’s how he caught the eye of the team management. He is still a work in progress and he still needs to play a fair amount of domestic cricket to get better. But he is a genuine talent and has the potential,” Pathan said.

Earlier this year, he finally made it to the limited overs team of Jammu and Kashmir and featured in two fixtures – a T20 and a 50-over game – where he made life difficult for the opponents. “He is a genuine good talent, who has the potential to go far. In the nets, he would often hit the batters on the helmet. With time, he will certainly improve further,” Parvez Rasool, who was the captain of Jammu and Kashmir team when Malik made his debut, said.

“He is very good friends with Abdul Samad – who also plays for Sunrisers Hyderabad. And for the last two seasons, he was a net bowler with SRH and that has not only boosted his confidence, but has also helped him learn a thing or two from international cricketers,” Rasool, who himself is an India international, said.

“He is a hard working cricketer and we need to ensure that we give him maximum opportunities so that he can improve his game further. He has that ability to make it big,” Rasool said.

Over the last few years, several cricketers from Jammu and Kashmir have made their presence felt at the national level and the IPL and with another youngster – who turns 22 next month – proving his mettle, the future of cricket in the valley is bright indeed!