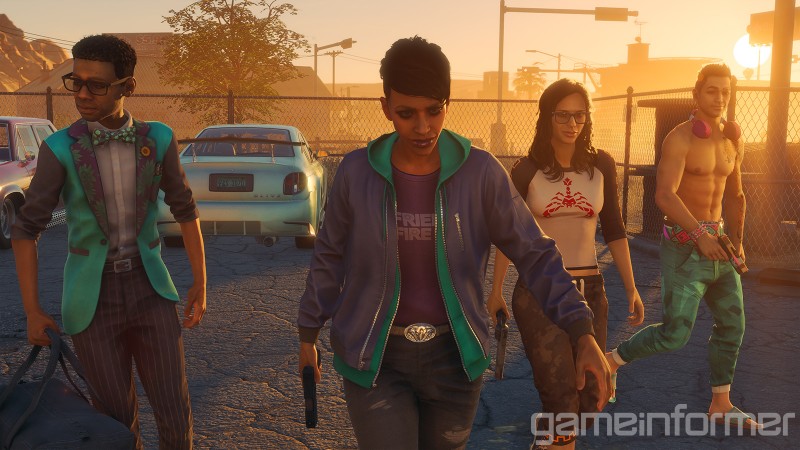 The Saints Row series began in 2006, introducing players to a beloved cast of characters over the subsequent decade. After 2013’s Saints Row IV, where players entered a computer simulation to battle aliens, and 2015’s Saints Row: Gat Out of Hell, where players literally descended into the depths of the underworld to fight Satan, Volition knew it had taken the series to the farthest reaches. Following Gat Out of Hell, Volition took a break from Saints Row.

The series had reached a natural resting point, and rather than continually try to one-up the previous entry with zanier scenarios and more bombastic characters, Volition went back to the drawing board. “It was never spoken out loud with clarity of something like, ‘This is it. We have specifically taken this as far as we would like, and when we do the next game, by God, we’re going to reboot it!’” Volition chief creative officer Jim Boone says. “But I think that everyone had that vibe that we just had fun taking this thing as far as we possibly could and leaving it all out there.”

After putting the series temporarily on ice, Volition developed 2017’s Agents of Mayhem. The game featured much of the Saints Row DNA, but fans clamored for the return of the studio’s most popular franchise. The groundswell of community enthusiasm combined with the studio’s own passion for the franchise to drive them back to Saints Row. However, the team didn’t want to just continue down the path it was going, stretching further and further into the realm of absurdity.

Volition considered options like flashing back to a time before Saints Row IV, but the most viable option was to reboot the series. Not only did this give the team a clean slate, but also a fresh story to tell. “[This approach] allows us to build on top of it,” narrative designer Jennifer Campbell says. “Once you add everything and the kitchen sink to the game, it’s difficult to then plan for future games after that because if you start with the climax, where do you go from there? A lot of fans have been wanting us to go back to … a more grounded game. We were trying to set up this reboot for its best chance for evolution.”

With that direction in place, Volition decided to create a new cast of characters so that it could tell the origin story of a new group of Saints, who hail from a new city inspired by the American Southwest. The initial class of Santo Ileso’s Saints includes four characters from disparate backgrounds. The customizable protagonist (who later becomes known as “The Boss”) starts out in Marshall, a tech-heavy, highly trained faction. Meanwhile, Neenah gets her start in Los Panteros and Kevin comes from The Idols, the other two rival gangs found in Santo Ileso.

It turns out low-level members of street gangs don’t make a whole lot of money, and apartments aren’t cheap, so they decide to put their rival affiliations aside in the name of saving money on rent. Though this seemingly doomed-to-fail roommate situation leads to some initial conflict among them, they quickly establish a policy of leaving work at the door when they come home. They’re joined by their fourth roommate, Eli, who came into the group not as a gang member but rather as a man moving to Santo Ileso chasing real-estate fortune.

However, even splitting their expenses, they still need to pick up side hustles to help make ends meet. In fact, the first mission I play during my hands-on time is called “Making Rent.” The group works well as a unit; your character is the motivating force behind the group and puts the mission above all else. Kevin is great with his fists, cares a lot about his friends, and is among the most well-connected people in the city. Neenah is an all-star driver and the best mechanic Los Panteros has. Finally, Eli is the brains of the operation and serves as the glue that holds the crew together.

“[Eli is] the one that keeps telling them through a lot of motivational tapes and motivational books that, ‘We should be out doing this for ourselves and controlling our own destinies,’” creative director Brian Traficante says.

Shortly after a successful heist of a loan office called Payday in “Making Rent,” the group realizes there might be something special between them. “They’re not the Saints at that point, but they realize they’re kind of good at what they’re doing, and they should maybe seek to scale their ability to do some of these things,” executive producer Rob Loftus says. “That’s where [your character] starts to point out like, ‘No guys, I think we can turn this into a bigger thing than just sticking up a Payday loan place.”

The unlikely roommates-turned-business-partners begin looking at each other as a family and eventually decide to form a group where they can grow their own criminal empire and make the riches they’ve only dreamt of to this point. Being the businessman that he is, Eli knows that any good enterprise needs office space, and Neenah knows of an abandoned church in the Mercado district the squad could use.

The church starts in a sorry state, but you can improve the HQ by raking in the dough. When the team first walks in, they notice fleur-de-lis symbols representing Catholic saints. The sign becomes a logo for the crew, and they adopt the name “The Saints.” With your character serving as the spark for the crew, you’ve officially begun down the path to becoming “The Boss.”

The newly christened Saints begin carrying out operations as an independent faction within the city. As you might imagine, the three gangs already in control of Santo Ileso don’t take kindly to a new player showing up, let alone one consisting of former members of their gangs. This dynamic paves the way for conflicts to emerge around every corner.

We’ll be getting into those rival factions, customization, and plenty more in future articles and videos, so be sure to keep an eye on our Saints Row hub by clicking the banner below. Saints Row launches on PlayStation 5, Xbox Series X/S, PlayStation 4, Xbox One, and PC on February 25.