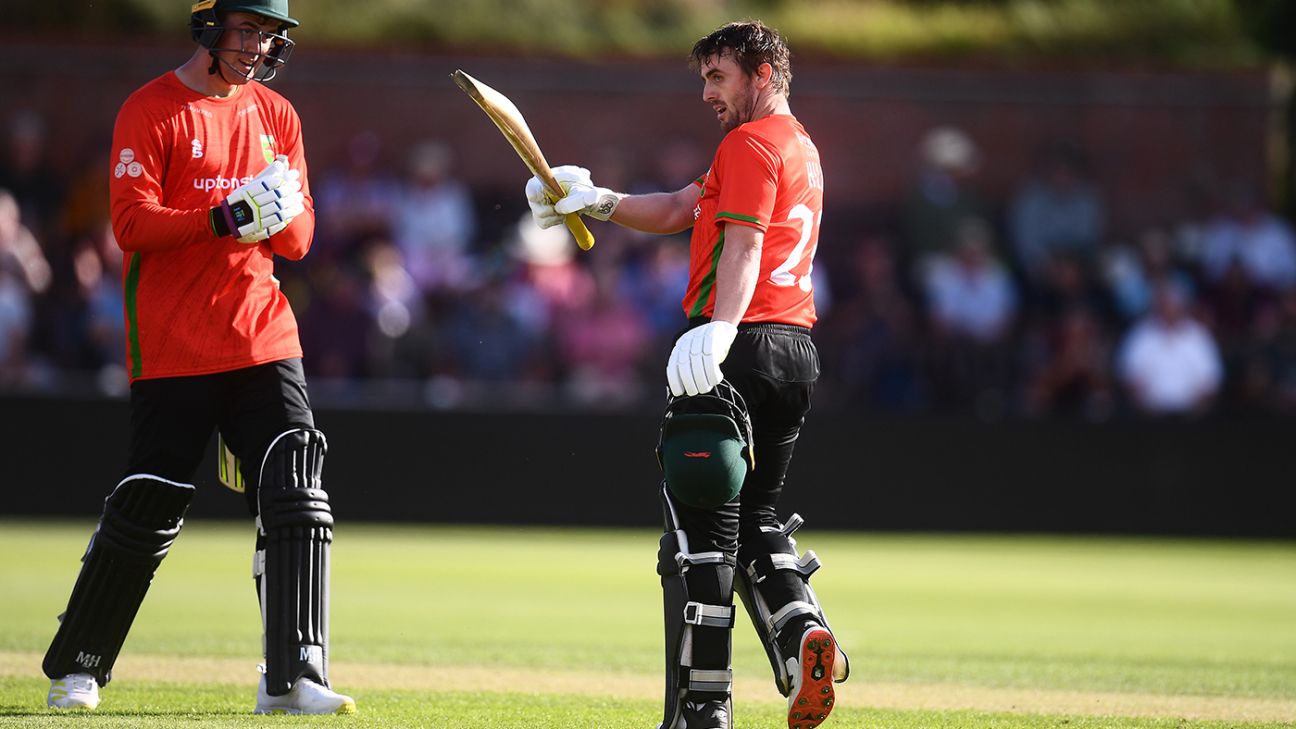 A Lewis Hill century and 85 from Louis Kimber guided Leicestershire to a six-wicket Royal London Cup win over Somerset at Taunton.

Hill cracked 107 off 106 balls, with seven fours and two sixes, sharing a fifth-wicket stand of 158 with Kimber, whose runs came from just 57 deliveries, to set up victory with more than five overs to spare.

Somerset made 326 for 7 after losing the toss, George Bartlett hitting seven sixes in his 108, a maiden List A century, and 17-year-old debutant George Thomas contributing a promising 75. But it didn’t prove enough on a flat batting track in increasingly sunny conditions.

The hosts were reduced to 104 for 5 in the 22nd over, despite a fluent 57-ball half-century from opener Steve Davies. A 3100 crowd saw Sam Young, Eddie Byrom, James Hildreth and Lewis Goldsworthy fall cheaply, Ben Mike striking with his first delivery of the match in the eighth over.

Davies struck six fours and a six in his 61, but when he was caught behind off Will Davis, Somerset had lost half their wickets for modest reward.

Thomas walked out with pressure on his young shoulders. But Bartlett began a recovery, reaching his fifty by hitting offspinner George Rhodes back over his head for six.

Local product Thomas struck the ball with increasing authority as the pair brought up a hundred stand in 110 balls. The teenager moved confidently to his half-century off 63 deliveries, with five fours and a six.

Bartlett was playing some majestic shots and brought up his hundred off 84 balls. Thomas then clouted successive sixes off Mike before losing his middle stump to the next delivery and departing to a standing ovation.

When Bartlett was out in the final over, he had made the highest score by a Somerset No. 6 in List A cricket, beating the 106 made by Ian Botham against Hampshire in 1981.

Leicestershire began by moving to 49 in the ninth over before Harry Swindells got a leading edge to Sonny Baker and skied a catch to backward point.

Rhodes fell lbw to Josh Davey for a duck and Somerset looked to be taking a grip when Rishi Patel fell to Ned Leonard for 40, a first victim for the young seamer. But Arron Lilley signalled his intentions with three sixes, including two in the same Leonard over, and Hill also looked in good touch.

Their entertaining stand of 61 in 6.2 overs ended when Lilley, on 39, clipped a catch to deep square off Baker with the total on 146.

Hill went to fifty off 53 balls. He greeted the introduction of Thomas into the attack with a six over midwicket. Kimber helped keep the required run-rate at around six and a half an over and the pair brought up a century stand in 14 overs.

A big six over deep square off Marchant de Lange took Kimber to a 46-ball fifty and he celebrated by clearing the ropes twice more in the same over, the 39th, which cost 29 runs.

It only remained for Hill to reach a chanceless hundred. Kimber fell to a big shot late on and his partner followed, but the outcome had been settled.