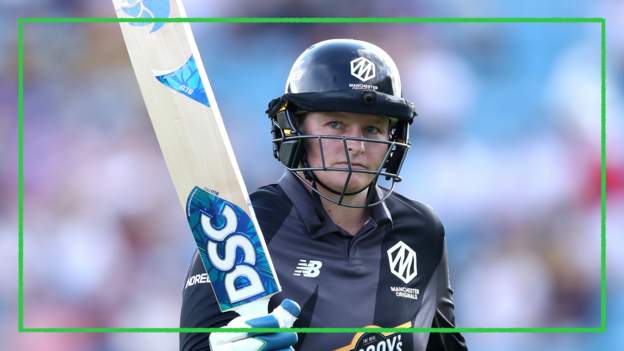 South African opener Lee’s 68 from 40 balls gave the already-eliminated Originals a rapid start in pursuit of 127 and they won with 14 balls to spare.

The Superchargers, who began the game second, were 16-4 in their innings before a brilliant rescue act from Laura Wolvaardt, another South Africa international, helped them post 126-5.

It had Superchargers as slight favourites but Lee peppered the boundary from the start – in total hitting 13 fours and one towering six.

She was caught by Wolvaardt with 25 runs needed from 30 balls but a third South African, Mignon du Preez, steered the Originals home with 24 not out.

The Superchargers, who have one game remaining in the tournament, drop to third with the defeat, below the Oval Invincibles. They could also be overtaken by Trent Rockets on Friday.

The teams who finish second and third will compete in the eliminator on 20 August with Southern Brave having already secured a spot in the final.

This defeat really hurts the Superchargers’ chances. To make matters worse, it was against their local rivals from across the Pennines.

The Originals had only won one game from six previously in the tournament but looked delighted at the finish. The home crowd were left disappointed.

Lee was brilliant. She had only scored a total of 100 runs in the tournament before this game but powered the ball to the boundary from her stocky frame. Her six towards the new Headingley stand was the biggest hit of the day.

The Superchargers had no answer and also did not help themselves by bowling six wides.

Their final match is on Tuesday against Birmingham Phoenix but their hopes of progressing could already be over by that point.

In the end it did not matter, but we should not forget that Wolvaardt played one of the innings of the tournament.

With her team’s hopes in her hands she steered them brilliantly to a score that would have been enough, had the Superchargers not come up against an in-form Lee.

The 22-year-old saw four wickets fall in the first 19 balls but played a steady innings before exploding at the end, hitting four fours and a six in the final six deliveries.

As the six sailed over the fielder’s head on the boundary, Wolvaardt’s Superchargers’ team-mate Jemimah Rodrigues, who earlier made just seven, leapt from her seat in celebration.

The home crowd, so quiet earlier in the innings, cheered the South African from the field – many of them giving her a standing ovation.

“A magnificent knock from Laura Wolvaardt,” said BBC radio commentator Daniel Norcross. “They looked dead and buried at 16-4 and she’s performed an act of destruction.”

It felt wrong to see her end the game on the losing side.

But the game wasn’t all about the South Africans.

There was still time for a 22-year-old Englishwoman, Ellie Threlkeld, to impress.

Threlkeld – described as looking like Darth Vader because of her black gloves, helmet, long-sleeved shirt and trousers – is a wicketkeeper who has quietly had an impressive tournament. No keeper has more dismissals than her in the tournament.

Her lightning-fast hands helped her stump Rodrigues and complete a run-out of Bess Heath.

Threlkeld, also a talented footballer who has played for Liverpool and Wigan Athletic, learned her glovework from England great Sarah Taylor. It shows.