Latham: ‘The more we play in these conditions, the more we are able to learn’ 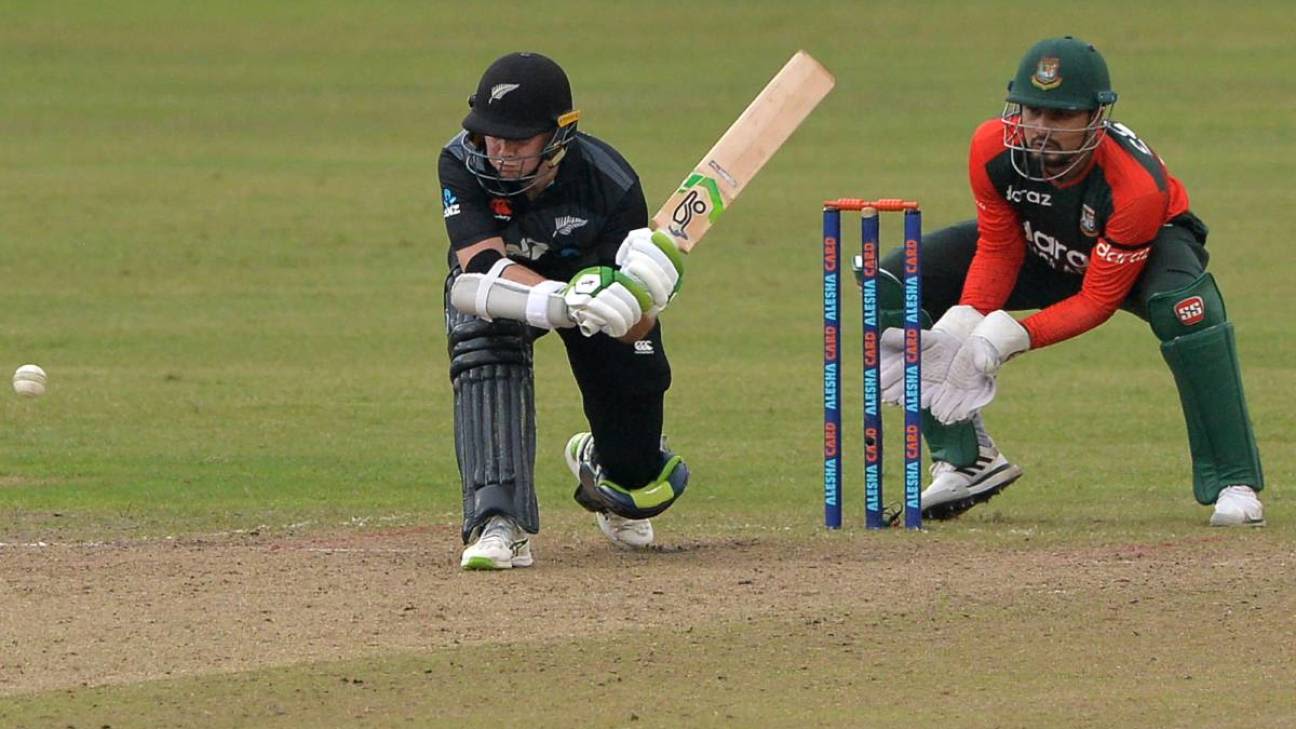 “A lot of these guys haven’t played in the subcontinent before, so being exposed to a different brand of cricket is good for them.”

After being skittled for their joint-lowest total in T20I cricket in the series opener against Bangladesh, New Zealand have shown improvement over the next four matches despite losing the series 3-2. Their captain Tom Latham has been central to both the victories, following up his maiden T20I fifty in the second match with another crafty half-century in the fifth T20I.

On Friday, Latham worked his way around a middle-order wobble and launched New Zealand from 83 for 4 in the 11th over to 161 for 5. Latham was on a run-a-ball 29 at one point, but teed off in the 19th over, when he lined up Taskin Ahmed for two sixes and a four in four balls. He eventually finished with an unbeaten 50 off 37 balls.

“It was obviously nice to spend a little bit of time in the middle,” Latham said. “Haven’t played a lot of T20 cricket for New Zealand but also for Canterbury over the last couple of years. For me, it’s just about finding a way in these conditions that are so foreign to us and probably a little bit harder than what we expected. So, for me it’s about, I guess, do the role as best as you can and it was nice I could do that.”

It was opener Finn Allen who had set the scene for New Zealand’s victory, clattering four fours and three sixes. After flickering briefly in the last two T20Is, Allen caught fire when he walloped left-arm seamer Shoriful Islam for 4,6,4 in the fourth over. Allen pressed on to 41 off 24 balls before Shoriful struck back to have the batter playing on with the last ball of the powerplay. Ben Sears also impressed, in his second T20I, pounding the deck at speeds north of 140kph. He hit 147kph with his second ball and had Mohammad Naim nicking off for 23 off 21 balls. Latham delivered a glowing appraisal of the two rookies.

“Yeah, especially it was great to see Ben come out; he hasn’t had a lot of opportunity on this tour so far,” Latham said. “To bowl like he did – he bowled quite quick, which is nice to see. Someone like him who hasn’t been around in domestic cricket for that long and Finn at the top showed how explosive he can be and got us off to such a good start, which is probably why we got to the score we did.”

At the end of the fourth T20I, in which New Zealand subsided to 93 all out, their coach Glenn Pocknall admitted that his side was about ten runs short. Latham said that New Zealand didn’t panic, heading into the final match, and backed themselves to turn in a collective performance.

“For us, it’s about continuing what we’ve been doing and in the last three-four games we were very close to putting it altogether,” Latham said. “We didn’t want to change things too much and we just knew we had to be better for a little bit longer. It was nice the guys were able to go out there and play with freedom today and one put a good score on the board but also bowl really well to defend a good score. So, certainly very pleasing getting into the Pakistan series.”

None of these players on the Bangladesh tour are part of New Zealand’s squad for the forthcoming T20 World Cup, but this stint in trying conditions was an important step in their growth, according to Latham.

“It was nice the guys were able to go out there and play with freedom today and one put a good score on the board but also bowl really well to defend a good score.”

“I think a lot of these guys haven’t played in the subcontinent before, so for them to have exposure to a different brand of cricket and a different way of cricket is going to be good for them and good for New Zealand cricket, Latham said. “Over the recent years, we’ve had some good results in the subcontinent across all three formats. So, the more we play in these conditions the more we are able to learn, we push our games forward.”

New Zealand will next travel to Pakistan on September 11 and serve quarantine for two days before hitting the nets. Latham was enthused about New Zealand’s first tour of Pakistan since 2003. Spectators up to 25% capacity have been allowed for the white-ball series in Rawalpindi and Lahore later this month. New Zealand will also be bolstered by the return of Martin Guptill, Daryl Mitchell, Mark Chapman and Ish Sodhi who are all part of the T20 World Cup squad.

“It’s obviously very pleasing for Pakistan as a nation to have international cricket back and back there they’ve had a couple of series in recent times and obviously this is another one,” Latham said. “So, for us, it’s just about going there and trying to adapt to conditions like we’ve done here and see what we get. So, another opportunity for the group and they’re all looking forward to it.”