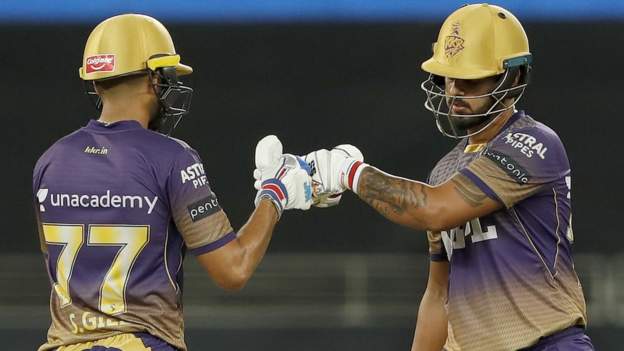 Chasing 116, Shubman Gill made 57 and Nitish Rana a crucial 25 before Dinesh Karthik hit a 12-ball 18 to win the game with two balls left.

Sunrisers Hyderabad made 115-8, with Kane Williamson top scoring with 26.

Kolkata remain fourth, but on 12 points as they edge clear of the chasing pack.

Morgan’s side are two points ahead of Punjab, Rajasthan and Mumbai – with the latter two teams having a game in hand.

Sunrisers, who are led by England’s World Cup-winning coach Trevor Bayliss and left Australia’s David Warner in the stands waving a flag in support, remain bottom with two wins from 12 games.

KKR get their balance right 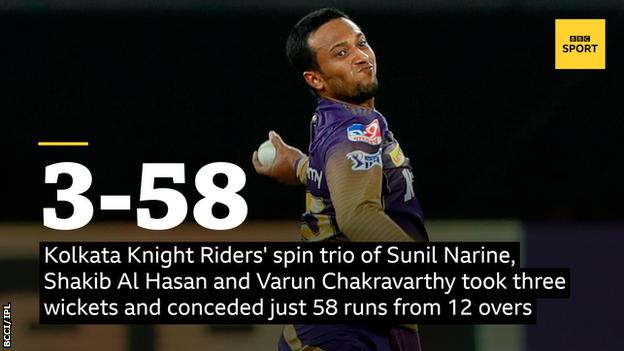 Kolkata are having to deal with the absence of West Indies all-rounder Andre Russell through injury.

In the last game they opted to go with an extra pace bowler, according to their coach during an in-game interview because of the ground dimensions despite having Bangladesh all-rounder Shakib Al Hasan in reserve.

On a bigger ground they changed their tactics again with Shakib coming in for his first appearance during this second phase in the United Arab Emirates.

Pace bowlers Tim Southee and Shivam Mavi, who also came into the team, removed both openers cheaply and that gave the spin trio of Shakib, Sunil Narine and Varun Chakravarthy a platform to squeeze and pick up wickets against a team lacking confidence.

Shakib provided a moment of brilliance to collect a defensive push, turn and run out Kane Williamson at the non-striker’s end – and from there KKR dominated.

The spinners took 3-58 in 12 overs before Southee and Mavi returned to both take a second wicket at the death.

With the pace of Lockie Ferguson also in reserve, KKR’s bowling looks well stocked and able to match the top sides if they do progress to the knockout stages.

Kolkata’s win was built on the partnership of 55 from 59 between Gill and Rana which, while it may not win any awards for entertainment, was match winning.

Gill, who opened the batting for India against Australia and England last winter, showed his class as he latched on to the bad balls – scoring 23 runs via the pull shot – and kept out the good ones.

He ended a run of 15 IPL games without a half-century too and a return to form for him would be very welcome if KKR progress to the play-offs.

Rana refused to panic when the required run rate started to rise – he was on one off nine balls, as he struggled to cope with the 92.8mph pace of debutant Umran Malik – but he stuck around and found increasing fluency to guide his side home.

Gill fell with 23 needed, and Rana 10, but Karthik used all his experience, and skill, to hit three crucial boundaries and secure the win.