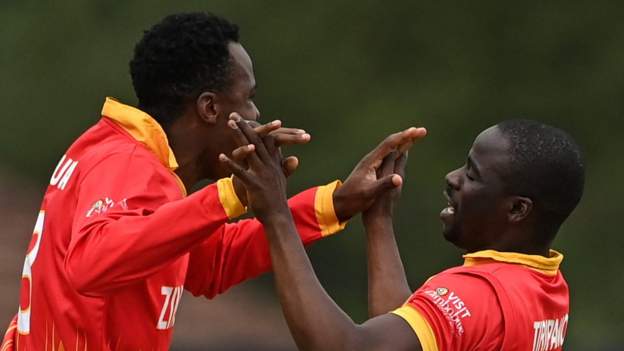 Zimbabwe tasted success in the final Twenty20 international against Ireland by five runs, but lost the series 3-2.

The hosts held an unassailable series lead going into Saturday’s game at Bready and Zimbabwe posted 124-4 with Craig Ervine hitting an unbeaten 67.

Ireland struggled in response with opener Paul Stirling out for 19 while Neil Rock top-scored with 22.

The Irish needed six from the final ball to win with one wicket left, but Josh Little was run out.

Zimbabwe won the toss and batted first, but were reduced to 3-2 before skipper Ervine steadied the innings and his 67 from 57 balls proved crucial.

Dion Myers added 27 while Mark Adair was the best of the Irish bowlers with 3-23.

Kevin O’Brien, captain Andrew Balbirnie and Harry Tector fell early while the in-form Stirling would not come to Ireland’s rescue this time.

The Irish were 30-4, but helped by Rock’s 22 and 15 from Shane Getkate they still had a chance of reaching the target.

The teams will now move on on to a three-match ODI series at Stormont with the opener at the Belfast venue on Wednesday.

“It’s been a pretty good series for us having gone 1-0 down – to then three matches on the bounce was big for this group,” said Balbirnie.

“It’s a shame that a couple of issues that we had in the first game crept in today but the boys can take a lot of confidence from the series win.”