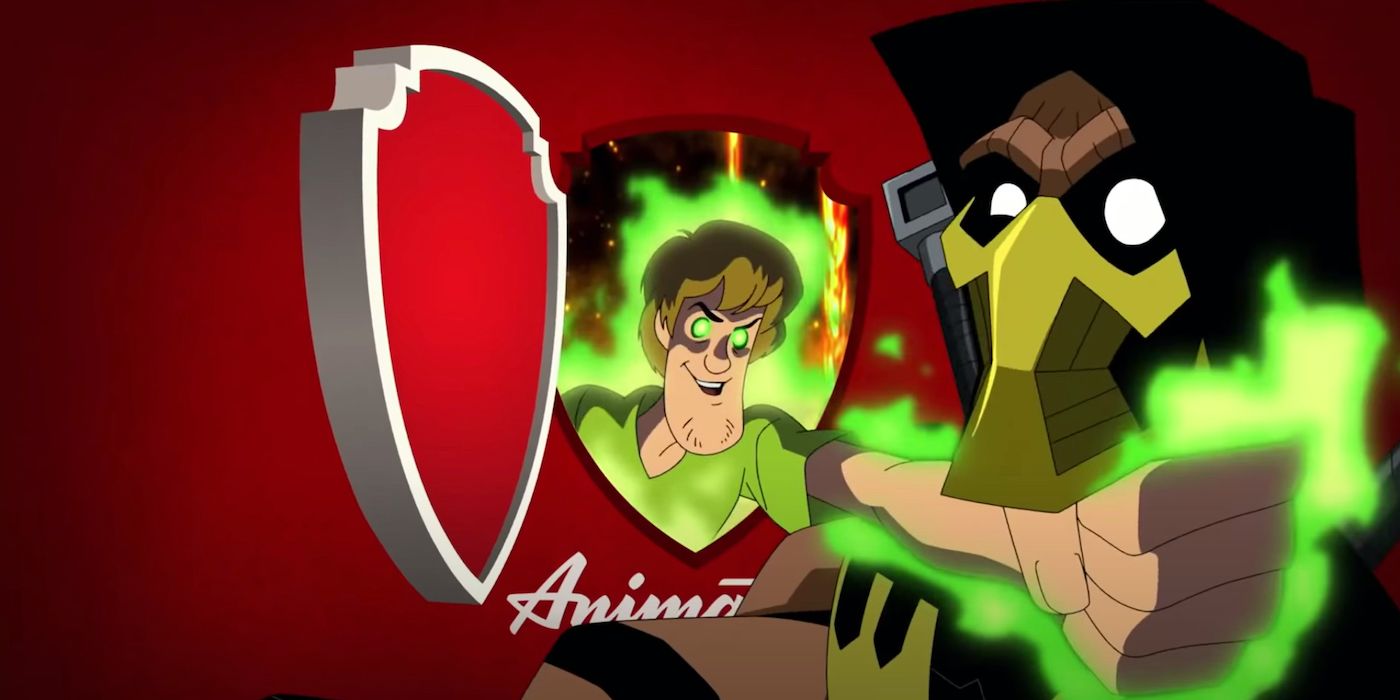 In a series with crossovers with the likes of The Predator, RoboCop, Leatherface, and Joker, fans have come to expect just about anyone to show up in Mortal Kombat. One of the more shocking fan-requested cameos has called for Scooby-Doo!‘s own Shaggy to rip off some heads and tear out some spines, so much so that a petition was set up to get the character in the latest entry in the series, Mortal Kombat 11. While not appearing in the game anytime soon, Mortal Kombat Legends: Battle of the Realms, the most recent animated Mortal Kombat movie from Warner Bros. shows the Scooby Doo! mainstay taking it to the Mortal Kombat character, Scorpion.

In the Warner Bros. Animation Logo introduction of Battle of the Realms, Mortal Kombat‘s resident spirit of vengeance and rage, Scorpion, shows off his agility as he jumps around the screen, flipping and brandishing his iconic kunai. As he appears to finish, the WB logo swings open, revealing Shaggy standing in the NetherRealm, his eyes a solid green and a smile of ill intent on his face. He grabs Scorpion by the throat and puts his own spin on Scorpion’s famous “Get over here!” line.

After dragging Scorpion through the open logo and off screen, Shaggy returns and gives a menacing stare to the audience, an aura of power building in strength around him. Luckily the Shield logo slams shut and contains the entity. The solid green eyes aura that surrounds Shaggy not only matches the character’s signature color but also wouldn’t be out of place around the NetherRealm sorcerer and former master of Scorpion, Quan Chi.

This playful opening, as well as the fan “demand” for Shaggy to be involved in Mortal Kombat all comes from the “Ultra Instinct Shaggy” meme from back in 2017. This meme focuses on a specific scene from the 2011 animated movie Scooby-Doo! Legend of the Phantosaur where Shaggy beat up an entire bar of bikers all by himself. This scene became the catalyst for internet users to point to Shaggy as the strongest fictional character ever. When Goku gained the new power level of Ultra Instinct in Dragon Ball Super, people were quick to attach this new power to the being mortals call Shaggy, thus creating “Ultra Instinct Shaggy.”

This scene is also a reference to the opening of the last animated Mortal Kombat movie, Mortal Kombat Legends: Scorpion’s Revenge. During the WB Animation logo intro for that movie, Scorpion came out of the WB Shield and grabbed Daffy Duck and dragged him to the NetherRealm. We can only hope that Shaggy was able to save him after defeating Scorpion.