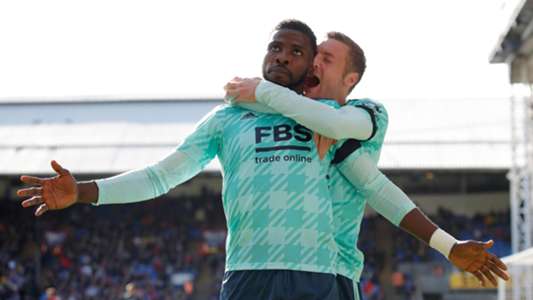 Dean Hammond has heaped praise on Leicester City striker Kelechi Iheanacho after he scored in the team’s 2-2 Premier League draw against Crystal Palace on Sunday.

The 25-year-old Nigeria international was handed his first start by manager Brendan Rodgers this campaign and he did not disappoint as he put the Foxes ahead in the 31st minute after snatching the ball from a defender and racing to slot it past goalkeeper Vicente Guaita.

The visiting side then went 2-0 up in the 37th minute through Jamie Vardy but they could not hold onto the lead as Palace returned the best side in the second half to score through Michael Olise in the 61st minute and Ghana star Jeffrey Schlupp in the 72nd minute to salvage a draw.

Former England player Hammond, who played for Leicester in the Premier League between 2013 and 2016, has hailed Iheanacho’s instincts to score the opener and described his finish as cool.

“The first touch is brilliant and he calmly passes it into the net. There’s no doubt in his mind and he cooly finishes it. His hold-up play was good and he played a lovely pass in the second half.
“He’s effective and he scores goals.”

During the game, Iheanacho was replaced in the 71st minute by James Maddison while Senegal prospect Boubakary Soumare came in for Hamza Choudhury on the hour mark.

Meanwhile, the game at Selhurst Park Stadium saw Iheanacho partner Vardy and he became the third Nigerian in Premier League history to score on his birthday after Austin Okocha and Obafemi Martins.

Okocha was first Nigeria to achieve this feat on August 14, 2004, on his 31st birthday as he grabbed a brace in the 4-1 win against Charlton Athletic while Martins scored on his 24th birthday for Newcastle United in a 2-1 win against West Bromwich Albion on October 28, 2008.

Iheanacho will hope to carry his scoring boots to national team duty when Nigeria participate in the 2022 Fifa World Cup qualification games against the Central African Republic next week.