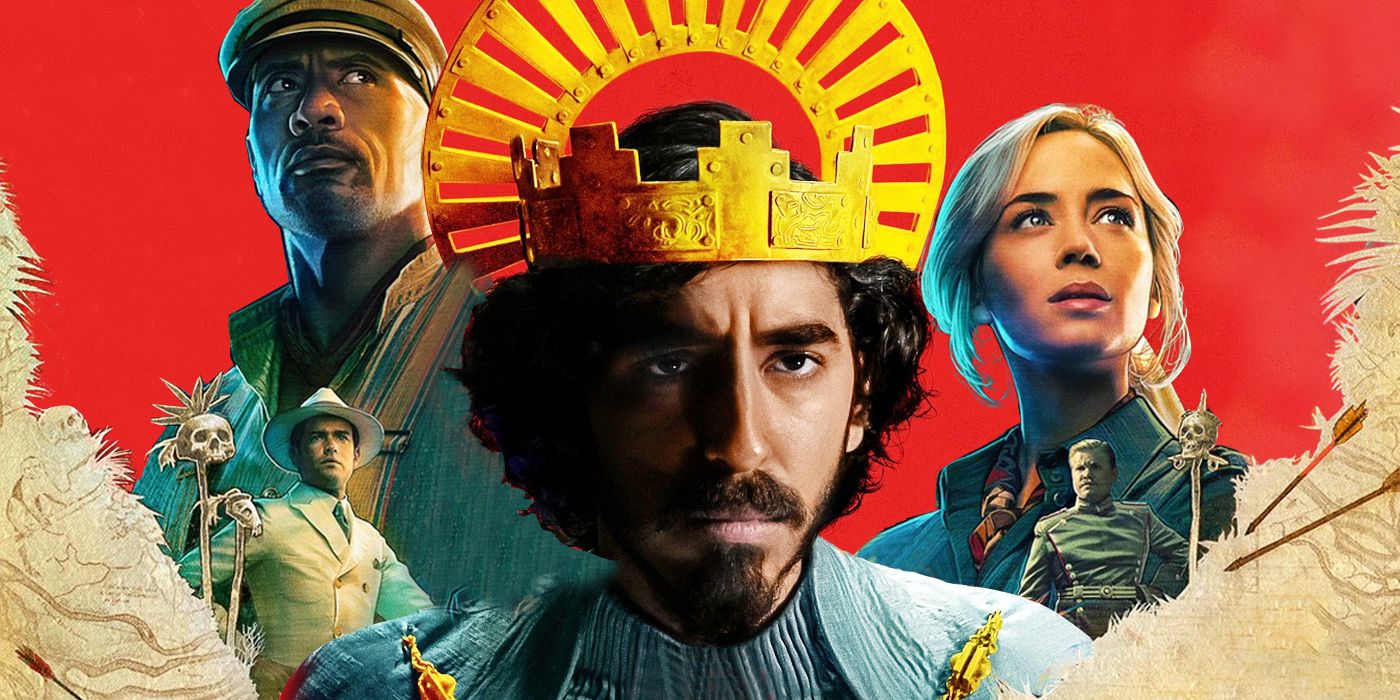 There’s nothing inherently wrong with digital effects. Films like Parasite and The Wolf of Wall Street brilliantly use cutting-edge CG wizardry to enhance the worlds their live-action characters inhabit. But there is a right and a wrong way to approach this form of visual effects and a pair of recent theatrical releases demonstrate each path CG can take. The Green Knight and Jungle Cruise show the correct and incorrect ways to merge CG with practical effects. While one film is an effective blend of the practical and the digital, the other shows what happens when you just lather the screen with CG nonsense.

On the positive end of the spectrum, The Green Knight is an outstanding depiction of how to fuse various forms of visual effects wizardry. Such a fascinating mixture begins with the way director David Lowery isn’t afraid to embrace practical effects for fantastical characters, like the titular Green Knight. Portrayed by Ralph ineson, this figure barges into the movie realized through makeup effects that lend such tangibility to his skin. The branches that cover his body seem like something you could reach out and feel.

RELATED: Why ‘The Green Knight’ Is a Uniquely Millennial Morality TaleThis doesn’t just make for a visually appealing figure and a commendable display of practical makeup wizardry. It also enhances the imposing quality of the character. With his size so apparent on-screen, it makes it understandable why only Sir Gawain (Dev Patel) would stand up to accept his challenge. This confrontation happens in a city that sure does look like a real place you could step into but is largely enhanced through CG trickery.

In an IndieWire profile of The Green Knight’s digital wonders, visual effects supervisor Eric Saindon noted the film’s medieval city was enhanced through CG accomplished in post-production. In realizing this location, Saindon noted that the team intentionally put in imperfections harkening back to old-school visual effects work into their model of the castle and its surrounding buildings. These are the touches that make Gawain’s initial home feel so lived-in and authentic.

Saindon’s comments reflect a great relationship between what could be accomplished on-set and what could be realized in post-production. Creating this dynamic allows tiny CG touches, like the seasonal changes in a single environment for a time-lapse scene, to be executed properly without distracting from the movie’s tangibility. CG is also used for means like “stitching together lots of environments” for big memorable set pieces like Gawain’s encounter with a troupe of giants.

It also helps that the inherently stylized visual scheme of The Green Knight makes it easier to buy flourishes that require digital enhancements. Sir Gawain’s fox companion, for instance, is an entirely CG creation, an understandable move given the difficulties in filming wild animals. In a film with a visual aesthetic that hews closer to reality, the recurring presence of an entirely CGI mammal may prove distracting. But in a world of quiet giants and ax-wielding tree people, that fox and other CG touches feel right at home. The Green Knight’s domain is one built for unforgettable eye candy and its remarkably detailed visual effects deliver on that promise tenfold.

Meanwhile, Jungle Cruise is a fascinating example of CG and practical effects work gone awry, especially considering pieces of its marketing were exclusively focused on the latter element. One of the first promotional featurettes released for the project highlighted a gargantuan practical set used to realize a gigantic dock market. It’s an impressive feat, but also one that doesn’t translate to the production design of the rest of the film. Despite spending a small amount of the runtime there, this dock got a practical set while the rest of Jungle Cruise’s jungle-bound environments are brought to life digitally.

The fact that Jungle Cruise chooses to emulate reality in its CG effects rather than opt for a more stylized visual approach just makes it extra apparent whenever live-action humans are stacked against obviously digital backdrops. If Jungle Cruise was going to look so artificial, why not go for more over-the-top imagery to justify rendering everything through CG effects? Instead, Jungle Cruise tries and fails to make it look like the Amazon is happening around the film’s lead characters. A place meant to inspire wonder and terror only leaves one contemplating whether they shot these scenes on blue-screen stages in Atlanta, Georgia, or Los Angeles, California.

Now, to be sure, some of Jungle Cruise’s embrace of CG is understandable. Specifically, the decision to render all wild animals, including a helpful pet cheetah, through CG is a welcome departure from Hollywood’s storied past of using and abusing actual beasts in the filming of movies. Creating fewer opportunities for wild animals to get abused is always a good thing and seeing Jungle Cruise use its digital effects for this purpose is a prime example of when CG can be used for good. The problem isn’t that CGI is used in Jungle Cruise, it’s that the thought used to blend reality and digital wonders in The Green Knight is totally absent here.

This is especially apparent in the climax, which is set in a hidden cave that’s home to a plant whose petals can cure all diseases. Here, Jungle Cruise is aping the finales of Indiana Jones movies and other similar titles with its action-packed confrontation between dueling human parties over an ancient artifact. However, Jungle Cruise’s climax embraces entirely digital creations to such an extreme degree that it never lives up to the excitement of the movies it keeps reminding moviegoers about.

The sight of Emily Blunt jumping between branches against distractingly artificial backgrounds is drained of excitement, while Dwayne Johnson fights entirely CG undead conquistadors in a showdown devoid of any tangible weight or any menace. In this sequence, it’s hard to remember this is the same movie containing a massive practical set. Any sense of consideration to how CGI can approximate the imperfections of reality or how tangible qualities can be imbued into the proceedings are nowhere to be seen.

Neither CG effects nor practical effects alone are enough to make a good movie. They have to be applied properly under the watchful eye of precise filmmakers and talented visual effects teams. When they manage to sync up and work properly, you get to deliver visuals that have never been realized in cinema. The Green Knight delivers on this front by not just making use of both artforms but leaning into the fact that these tools should be used to create sights detached from reality. The Green Knight leans into the fantastical in its contemplative fantasy yarn and it uses visual effects to conjure up imagery more reminiscent of The Fabulous Baron Munchausen than typical grim and gritty fantasy tales.

Meanwhile, Jungle Cruise just can’t get a handle on how to properly fuse its disparate visual effects approaches. In particular, it leans too heavily on CG effects to carry entire sequences, all while using those works to render drably realistic sights like a dimly lit cave rather than something extraordinarily removed from the real world. CG is not inherently a bad thing but it can be a problem when it starts getting used in excess. The lack of excitement or tangibility in the most CG-heavy scenes of Jungle Cruise is a reflection that the visual effects balance seen in The Green Knight is just not as easy to pull off as it may look.

KEEP READING: ‘The African Queen’ at 70: How One Jungle Cruise Influenced Another ‘Jungle Cruise’

The festival will also hold virtual screenings for nearly every film in attendance.

Douglas Laman is a life-long movie fan, writer and Rotten Tomatoes approved critic whose writing has been published in outlets like The Mary Sue, Fangoria, The Spool, and ScarleTeen. Residing both on the Autism spectrum and in Texas, Doug adores pugs, showtunes, the Wes Anderson movie Fantastic Mr. Fox, and any music by Carly Rae Jepsen.