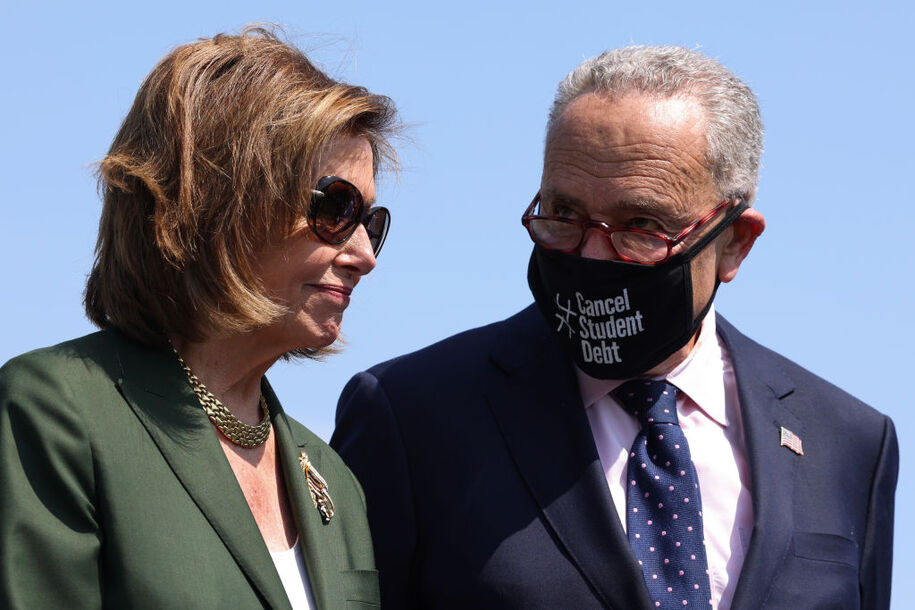 House Speaker Nancy Pelosi might have finally reached that conclusion herself. She told reporters Tuesday that ceding congressional power on raising the debt limit to the Treasury Department is something to look at. “I do think it has merit,” she said. There’s legislation in the House now that would do just that. It is cosponsored by the powerful chair of the Budget Committee, Rep. John Yarmuth of Kentucky. (Yarmuth announced his intent to retire after this term, so it would be a fitting final accomplishment for him, finally getting one up on his fellow Kentuckian, McConnell.)

“After everything the American people have been through over the last 19 months and all the progress we have made in our recovery, the last thing we need is a dangerous game of political brinkmanship that will devastate our economy and plunge us into another recession,” said Yarmuth when he and Rep. Brendan Boyle of Pennsylvania introduced the bill last week. “It’s time for Republicans to pull the ripcord and support our legislation to implement the McConnell Rule, giving the Treasury Secretary the authority to raise the debt ceiling. We need to get past this politically manufactured crisis and get on with the business of addressing the needs and priorities of the American people.”

That “McConnell Rule,” by the way refers back to that fight with President Obama in 2011, when an agreement between McConnell and the White House gave the administration the power to raise the debt limit by a maximum of $1.2 trillion, but gave Congress the ability to reject the increase. That veto power, however, comes with a 60-vote threshold in the Senate, meaning it would require bipartisan support. It’s a good trick, one that even Sens. Joe Manchin and Kyrsten Sinema could get behind because “60 votes” and “bipartisan.”

“That seems to have some appeal to both sides of the aisle because of the consequences to people of not lifting it,” Pelosi said. Not that any Senate Republicans would admit to there being any appeal to them right now, even if the whole thing was McConnell’s idea in the first place. It’s hard to imagine a more toxic GOP than the one we had in Obama’s first term, but then came Trump.

This is a good idea for getting rid of the whole threat of the debt ceiling, and fun because Yarmuth can rub McConnell’s nose in it a little. But it’s not necessarily the most effective way to get it done at the moment. That might be to actually concur with McConnell, and do it in budget reconciliation. Not that that wouldn’t potentially also involve a fight with Manchin and/or Sinema, but the stakes on that could bring them around.

There are a couple of ways that mooting the issue could be done in reconciliation. The argument against it from Democrats has been that the rules of reconciliation require a number be attached to the hike. But that’s not necessarily the case. It could be done by saying that the “number” attached equals the nation’s debt, thus automatically indexing the government’s borrowing authority to what it owes and making this a non-issue. That might require overruling the Parliamentarian, the Senate staffer who advises on the rules, but for such an issue as momentous as this, it’s definitely worth it.

Here’s another idea that could go into reconciliation from former Senate staffer Ira Goldman, with the added fun of putting it all on Republicans and the former guy.

“The limit on the debt shall be increased by an amount that is equal to the increase in the debt from the first day to the last day of the term in office of the 45th President of the United States.”

That would be about $7.8 trillion, so that would definitely work, too. And it would be really, really satisfying. It would be worth Schumer and Pelosi giving in to McConnell’s demand that they include the debt ceiling in budget reconciliation, if they could do it in a way that both humiliates him and takes it away as a weapon—forever.