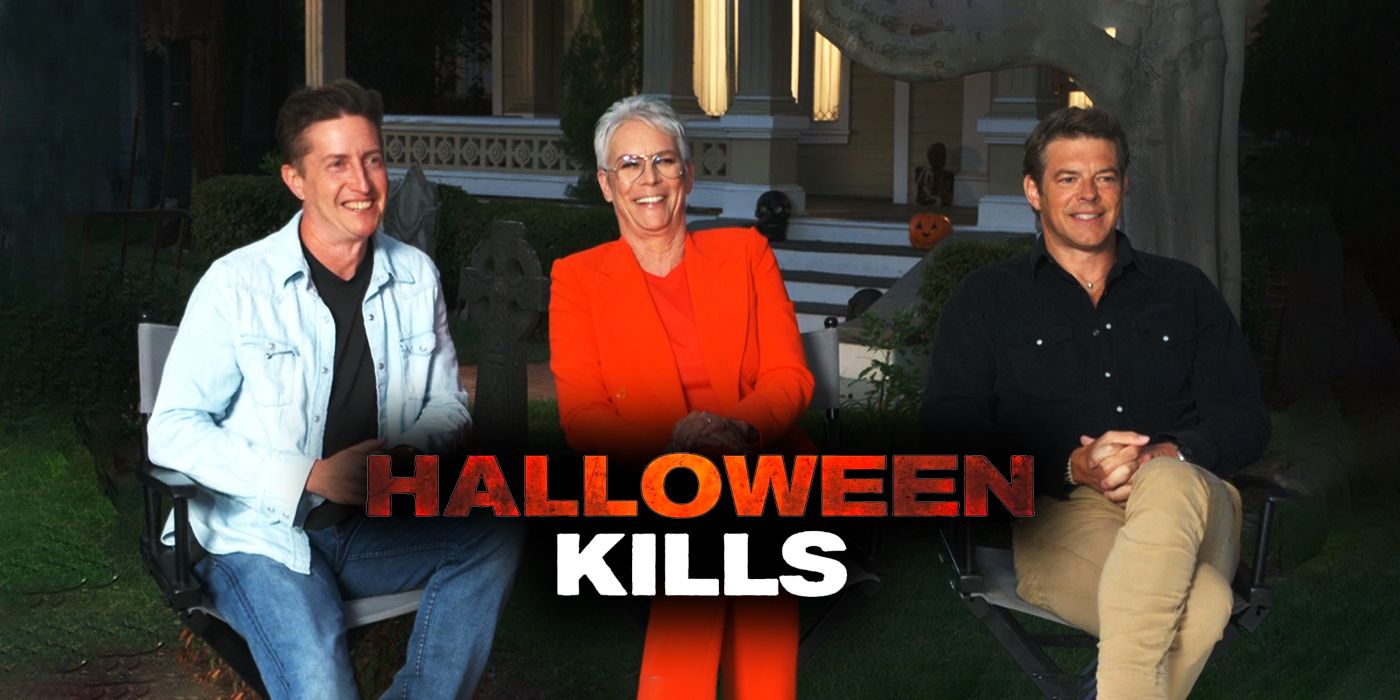 With Halloween Kills opening in theaters this weekend and also streaming for free on Peacock, the other day I got to speak with Jamie Lee Curtis, director David Gordon Green and producer Jason blum about making the sequel. During the interview, they talked about what fans would be surprised to learn about the making of Halloween Kills, why shooting the film was an out of body experience for Green, how they all really get along, the massive ambition of the sequel, what it’s really like shooting nights for two months, how they never lie to each other, and more. In addition, Curtis talks about why Laurie Strode would have been happy to have died killing Michael Myers and protecting her family, and her approach to playing the “he’s still not dead” moment in this sequel.

In the sequel, which starts right as the last film ends, we are back in the town of Haddonfield and dealing with the aftermath of the events of 2018’s Halloween, which saw Laurie Strode (Curtis), her daughter Karen (Judy Greer), and her granddaughter Allyson (Andi Matichak) narrowly escaping the clutches of Michael Myers. As they are rushing to the hospital to get Laurie Strode medical treatment, the fire department is rushing to her home to put out the blaze, which leads them to unintentionally set Myers free to continue his rampage. As you can imagine, chaos ensues, and Myers shows no mercy to the people he encounters. Moreover, Halloween Kills brings back several more characters from the iconic franchise — Anthony Michael Hall plays a grown-up Tommy Doyle, and Kyle Richards will reprise her role as Lindsey Wallace from the 1978 film. Nancy Stephens also returns to the franchise as Marion Chambers, former assistant to Dr. Loomis.

Watch what Jamie Lee Curtis, David Gordon Green and Jason Blum had to say in the player above and below is exactly what we talked about followed by the official synopsis. Finally, this was my first in person interview since COVID began and it was great to actually talk to people face to face and not over Zoom.

Minutes after Laurie Strode (Curtis), her daughter Karen (Judy Greer) and granddaughter Allyson (Andi Matichak) left masked monster Michael Myers caged and burning in Laurie’s basement, Laurie is rushed to the hospital with life-threatening injuries, believing she finally killed her lifelong tormentor. But when Michael manages to free himself from Laurie’s trap, his ritual bloodbath resumes. As Laurie fights her pain and prepares to defend herself against him, she inspires all of Haddonfield to rise up against their unstoppable monster. The Strode women join a group of other survivors of Michael’s first rampage who decide to take matters into their own hands, forming a vigilante mob that sets out to hunt Michael down, once and for all. Evil dies tonight.

While ‘Halloween’ focused on the Strode family, ‘Halloween Kills’ centers around the town of Haddonfield that has been tormented by Michael Myers.