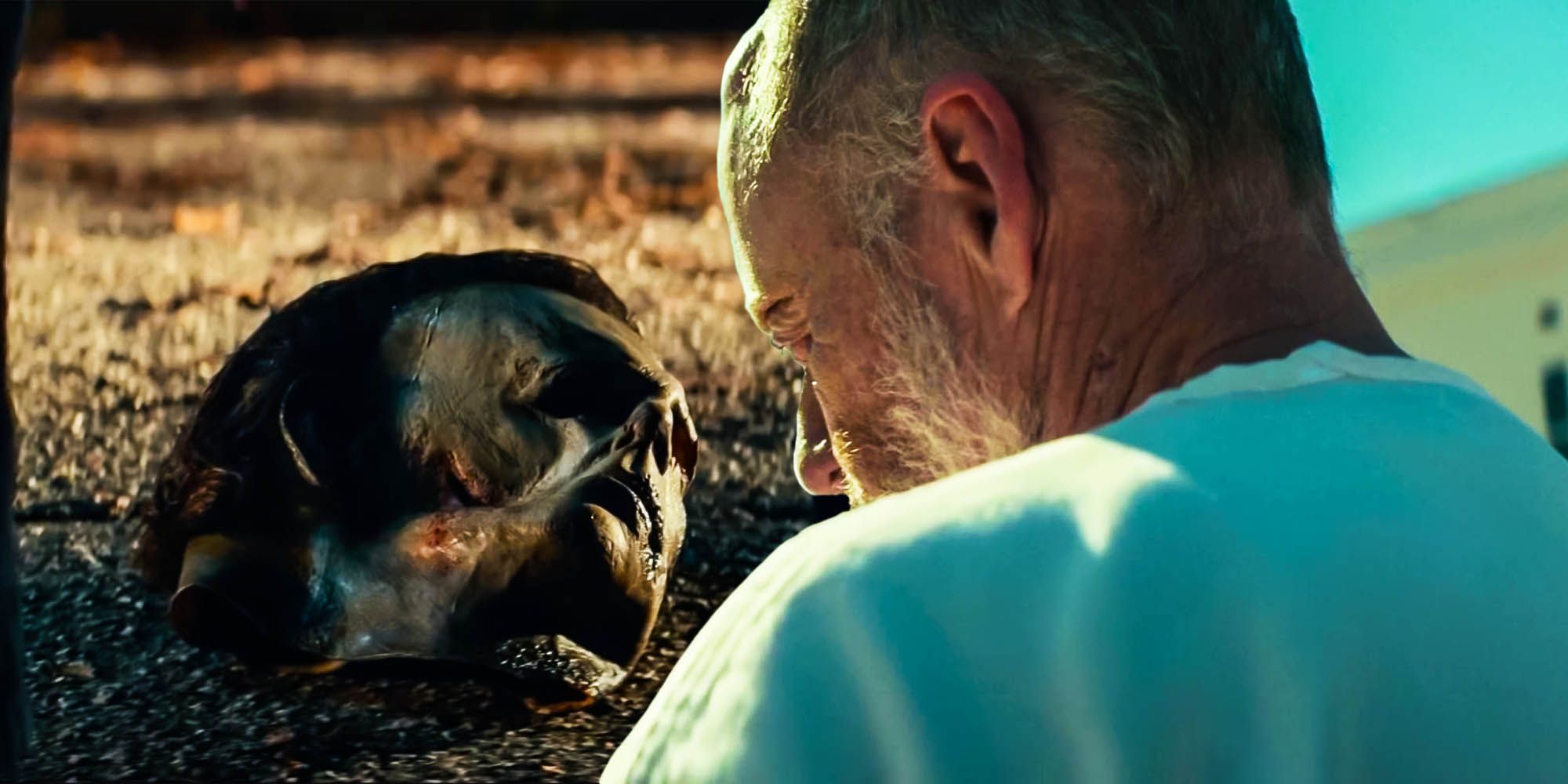 David Gordon Green, the director of Halloween Kills, explained the surprising technical challenges presented by the Michael Myers mask. Halloween Kills is the 12th Halloween film, and the second in the Blumhouse trilogy that began with Halloween in 2018. The film, which arrives in theaters on October 15, stars Jamie Lee Curtis, Judy Greer, Andi Matichak, Nick Castle, James Jude Courtney, and Anthony Michael Hall. Kyle Richards, Nancy Stephens, and Charles Cyphers will also be reprising their roles from the original 1978 Halloween.

Michael Myers is the killer who menaces victims in the Halloween films, except for Halloween III: Season of the Witch, a notable oddity with an unrelated plot. He is the embodiment of pure evil, who seemed to just snap as a boy, leading him to murder his teenage sister. One of the iconic elements of the character is his blank-faced mask, which was originally created by spray-painting a William Shatner mask completely white.

Related: Is Michael Myers Human Or Supernatural? Every Version Explained

While the mask itself is an iconic image, most people have never thought about what it’s like to actually shoot a film with it. Per Comicbook, at a Beyond Fest Q&A, David Gordon Green discussed the challenges of balancing all the needs of the story with the technical requirements of the Michael mask. While he discussed the importance of making every scene work on an emotional level, he said sometimes that doesn’t lead to the mask “getting the love it needs by the lighting department.” Read the full quote here:

In terms of the challenges, I feel like I’m usually very prepared for either the technical or the performance. And there’s always a curveball in one of the other of them, on every scene. So when you’re trying to juggle the reality of a kill scene, or making sure that the effect looks real, sometimes I get so caught up in that, that I neglect to give the actress attention, and performance attention. Or sometimes I come in so rehearsed that then the… How to shoot the gag so that the lighting is just right, or it’s hard to…

The Michael Myers mask, it only works in certain angles and certain lighting environments. So sometimes you’ll get so caught up in dialogue that you’ll think, “Oh wait. But then the mask is not getting the love it needs by the lighting department.” And so it’s just kind of juggling all of those technical… I mean, there’s no scene in this movie that’s just two people talking in a room. So it gets very challenging trying to figure out where to prioritize. Is it in the atmosphere, is it in the technical, is it in the emotional?

A blank white mask that is almost exclusively seen in scenes of darkness certainly would cause many issues that need to be addressed. It’s a challenge that every director of a Halloween sequel has faced, with varying degrees of success. However, with a film featuring the return of so many iconic characters, it’s important for them to be squaring off against a villain that looks like the one they fought so many years ago.

It’s especially important for Halloween Kills to get the Myers mask right because this trilogy is positioning itself as the end of the long battle between Laurie Strode and Michael Myers. While there will almost certainly be more Halloween films in the future, the franchise has reached a point where it can’t remain in continuity with a 43-year-old film forever. It’s important for the director helming this important project to pay proper respect to the character by making sure he looks as good as possible, so it’s very beneficial to the project as a whole that Green is at least asking the right questions.

Next: Halloween Kills: Unmasking Michael For The Finale Is A Bad Idea

Brennan (he/him) is a senior writer at Screen Rant and a millennial who knows more about 80’s slasher films than he has any right to. A former host of the Attack of the Queerwolf podcast, Brennan has been writing and podcasting about pop culture (especially horror films) for a decade.

Brennan’s interests also include the Muppets, bubblegum pop from around the world, and reading (especially Jane Austen, Agatha Christie, the manga of Junji Ito, and novels of magical realism). His favorite film directors are Wes Craven and Pedro Almodóvar.