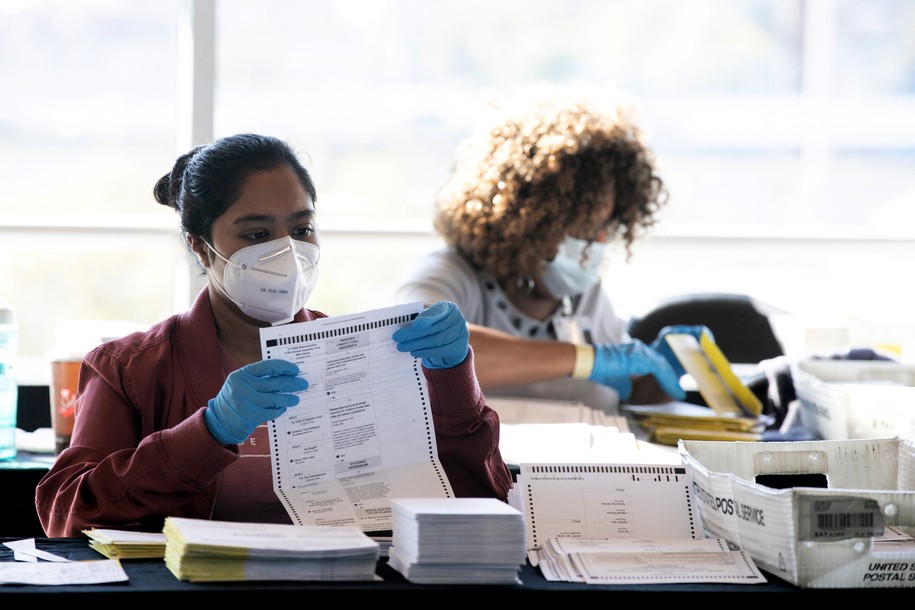 A survey by the nonpartisan Brennan Center for Justice found that nearly one in six local election workers have received threats of violence against them and their families, and almost one in three said they feel unsafe because of their job. The threats are real for both the officials and workers. Tricia Rafffensperger, the wife of the Republican Georgia secretary of state who refused to “find” 11,780 votes so Trump could win, has been dealing with calls and text messages that promise her that her family “will be killed very slowly.” The Michigan secretary of state had her home surrounded by an armed militia.

David Becker, executive director and founder of the Center for Election Innovation and Research, said this is “absolutely” going to lead to a mass exodus of professional election administrators. It’s already happened, especially in the swing states: One-third of Pennsylvania’s county-level election officials have quit in the past year, along with twenty-four county and municipal clerks in Wisconsin. They are already paid dismal salaries and are expected to be experts on logistics, cybersecurity, communications, customer service, and voting law. Now, in addition to having to face harsh criminal penalties for administering their duties, they and their families have to live in fear. And that’s not the worst of it. Is it any wonder they are leaving?

The problem is worst for volunteers who work for little or no money for long hours—up to 14 hours on Election Day. Not only are they in the most imminent danger, but they are also the ones we are most likely to lose. Our free and fair elections, our very democracy, depends on participation from these dedicated, trained workers. Getting people to volunteer has already been a huge challenge long before last year, but in 2020, problems really started to get out of control.

First, election workers tend to skew older, with most being over 60. The COVID-19 pandemic resulted in many of these poll workers no longer volunteering because they feared getting sick. Yet now, potential volunteers have to decide if their civic duty is worth the stalking, harassment, and threats of violence from some of their fellow Americans who can’t accept the results of the election.

A longtime election worker and her daughter are still in hiding after Donald Trump and his right-wing allies maliciously shared selectively edited and misleading clips of surveillance video showing a suitcase of ballots, which had been packed in plain view of the press and monitors, because they thought their work was done for the day and they could leave. Another man had to move and change his appearance because a monitoring video showed him crumpling up instructions, which Trump supporters falsely claimed was a ballot. A Black army veteran delivering ballots was followed and almost run off the road by an SUV. She had to be escorted by police and said she is very likely not going to volunteer again.

Fulton County’s elections director, Richard Barron, was deluged with hundreds of threatening messages toward both him and his staff. Most of the threats were full of racial slurs since his staff is mostly African American. Sadly, with very few exceptions, Republican officials and politicians have refused to denounce these threats. In fact, Trump and his political allies have actually solicited or encouraged violent behavior. (Violence seems to be the new normal for the GOP; just ask the Capitol police officers on Jan. 6.)

Sadly, but not surprisingly, there has been a woefully inadequate response from law enforcement agencies where the violent threats have been the worst. In Georgia, where paramilitary activity by militant far-right groups was tracked at more than twice the nationwide rate, there have been almost no arrests for the crime of harassing and threatening death against election workers.

Threats against election workers in blue states, like Virginia and New York, have resulted in charges and arrests. Yet Georgia’s Gwinnett County Solicitor-General Brian Whiteside said he has a deep fear that his people are going to get hurt “because [police] are not making enough preventive arrests when these incidents happen.”

Democrats are on our own here. We cannot in any way expect Republican state legislators and governors to start being responsible. In fact, many are ratcheting up the rhetoric, excusing violence, expelling Democratic election officials, and ginning up phony outrage by pursuing fraudulent “audits” that look for bamboo fibers based on wacky, debunked conspiracy theories. All of their moves are designed to exacerbate the violence, not curb it. The fact that so many election officials are quitting, along with many workers, isn’t really a problem for the GOP—it’s the goal.

Fewer workers means fewer polling places, or at least longer lines. The longer lines are almost exclusively in high-population areas, which is the point. Election infrastructure in swing states under Republican control already faced unprecedented challenges due to the pandemic, and most offices are woefully underfunded as it is. One of the few reasons the 2020 election was able to work as well as it did was outside grants from nonprofit organizations that picked up the slack.

The GOP put the kibosh on that, barring county governments from working with the private sector to secure grants going forward. This means that there will be even less funding in the future in red states for polling places, election workers, and election security measures; but that is the entire point.

Unless Washington acts, the midterms for 2022 will likely have the longest lines, the least security, the most voter intimidation, the least amount of worker training, and the fewest election workers in decades. This is to say nothing about the vital voter registration and outreach that counties could do with that private grant funding. Unfortunately, the conspiracy theorists, who have plenty of time on their hands and are absolutely dedicated to sabotaging our democracy, have only grown in numbers and will be out in force at the next election.

Even worse, the Trump Republicans who tried to overthrow the last election are fighting to be the officials to run the next one. These include Jody Hice of Georgia, Mark Finchem of Arizona, and Kristina Karamo of Michigan, to name a few. None of them have a hint of integrity or independence. Don’t count on any of them to stand in the way of Trumpists threatening violence against election workers, as their goal will be to overthrow any election in which they don’t like the results.

Democrats aren’t helpless, of course. A Democratic-friendly Justice Department has launched a task force to combat the threats poll workers have been facing. They have the ability to prosecute for offenses if Republican-led states choose to give violators a pass. The DoJ absolutely needs to use this power to deter criminals intent on sabotaging our elections.

In addition, a group of Democratic lawmakers recently unveiled two pieces of important legislation. The first, from Senator Amy Klobuchar, is entitled Protecting Election Administration from Interference Act. This law would extend the prohibition of threats against election officials to include those involved in ballot-counting, canvassing, and certifying election results. It also strengthens protections for election records and election systems to “stop election officials or others from endangering the preservation and security of cast ballots.”

Another bill, from Georgia Senators Raphael Warnock and Jon Ossoff, is called the Preventing Election Subversion Act, which would prevent local election officials from being removed without cause while protecting the safety and security of election workers and volunteers. It would also establish a minimum buffer zone to limit how close a poll observer may come within a voter, and make it a federal crime to harass or threaten an election worker.

We’ve been hearing a lot about the For the People Act, which addresses voter access and curbs some of the racist voter suppression from the GOP, yet these other two pieces of legislation are just as critical—if not more so. Joe Biden put the full weight of the presidency in getting infrastructure passed, but these bills are far, far more important. We are literally in danger of losing the foundation of our entire republic, especially since the GOP has now given up any pretense that they want to preserve it.

We need to put these efforts front and center when the Senate returns this month. If Republican politicians want to block them, let them; I’d love to hear them squirm while they explain why they oppose protection from violence against election workers. Bring this up on every political show. Hold votes on it. We really don’t have anything to lose—except our democracy.