God Of War Ragnarök Trailer: Is That Thor, & Is He A Villain? 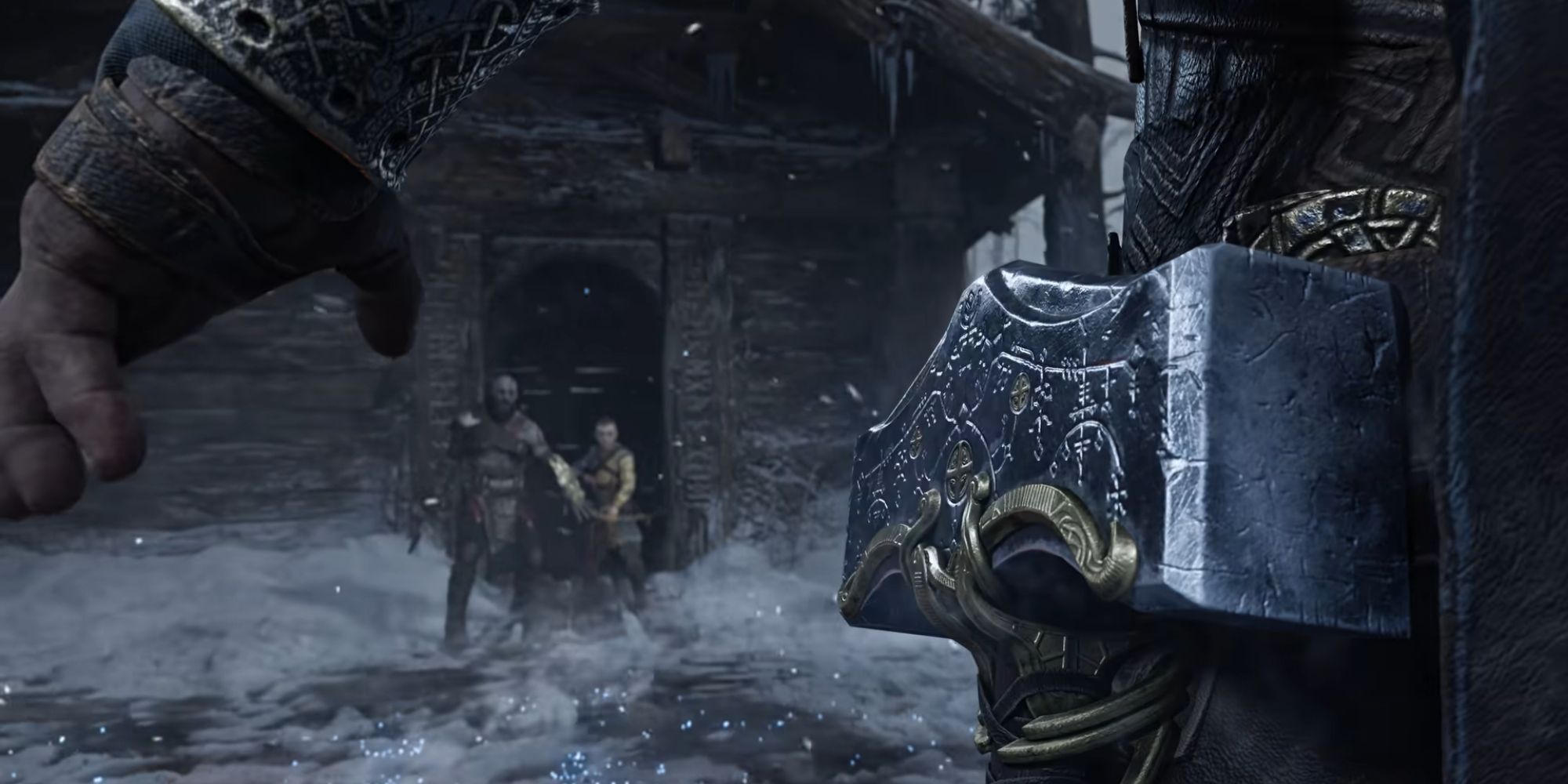 God of War Ragnarök’s gameplay reveal trailer teased a hammer-wielding Norse thunder god, and it is indeed Thor, primed to face off against Kratos.

The first gameplay footage of God of War Ragnarök teased the involvement of Thor with a menacing shot of his hammer, Mjolnir. The thunder god was name-dropped several times during God of War 2018’s adventure of Kratos and Atreus, eventually revealed to be Loki, through Norse mythology. Thor was described as a monster who killed every Giant in Midgard he could find, and it was mentioned that he and the World Serpent hated one another after fighting to a stalemate. He even made a brief cameo appearance at the end of the first game, so it seemed inevitable he would return for God of War Ragnarok.

In God of War‘s secret ending, Kratos and Atreus are awoken “Years later” by a terrible storm, and the two leave their home to find a mysterious cloaked figure surrounded by lightning. Kratos demands to know who they are, and the figure shifts their cloak to reveal the hammer Mjolnir on their belt, identifying them as Thor. This was apparently all a dream Atreus had, but God of War Ragnarok‘s reveal suggests that may not be the case.

In God of War Ragnarok‘s debut trailer at the September 2021 PlayStation Showcase, a scene identical to the secret ending was featured with what seemed to be Thor’s voice speaking in the background, asking (presumably) Kratos if he was “a calm and reasonable person.” Though the trailer didn’t officially confirm the figure was Thor, developer Santa Monica Studio, did so soon after – even revealing his full appearance.

The studio confirmed Thor’s involvement in a PlayStation Blog post. Thor will serve as one of Ragnarok‘s main antagonists, alongside Freya. Feeling “bloodlust and wrath” over the death of his sons, Magni and Modi, and his half-brother, Baldur, at the hands of Kratos and Atreus in God of War 2018, Thor aims to exact his revenge.

Following the showcase, Santa Monica Studio art director Raf Grassetti shared the first look at Ragnarok‘s Thor design, and the Norse god looks completely different from his famous Marvel counterpart. Thor’s appearance leans heavily into his depiction in Norse folklore, with long red hair and a burly physique. The character was also revealed to be voiced by Ryan Hurst, who should bring the level of gravitas to Thor that he brought to Sons of Anarchy’s Opie Winston and The Walking Dead’s Beta.

During Sony’s PlayStation Showcase post-show interviews, God of War Ragnarok game director Eric Williams described Hurst’s performance and Thor’s character as “very different from the Australian hunk you might know.” He went on to say Thor’s personality is that of a “hedonistic man-child” and that the character is “a little off-kilter than the Thor people know right now.” It will be interesting to see Thor in a more villainous capacity in God of War Ragnarok, providing a hitch in Kratos and Atreus’ plan to find Tyr and stop the impending apocalypse.

Next: God of War Ragnarök Trailer: Who The Girl At The End Is

Mason is a freelance Game Features Writer for Screen Rant with a Bachelor’s Degree in Journalism and Mass Media from Wingate University. Being involved in video game journalism has always been a goal of Mason’s, and being able to contribute his gaming knowledge to Screen Rant is a dream come true. Working out of North Carolina, Mason spends his free time trying to catch up on his backlog of games or finishing one of the 10 TV shows he’s currently watching.