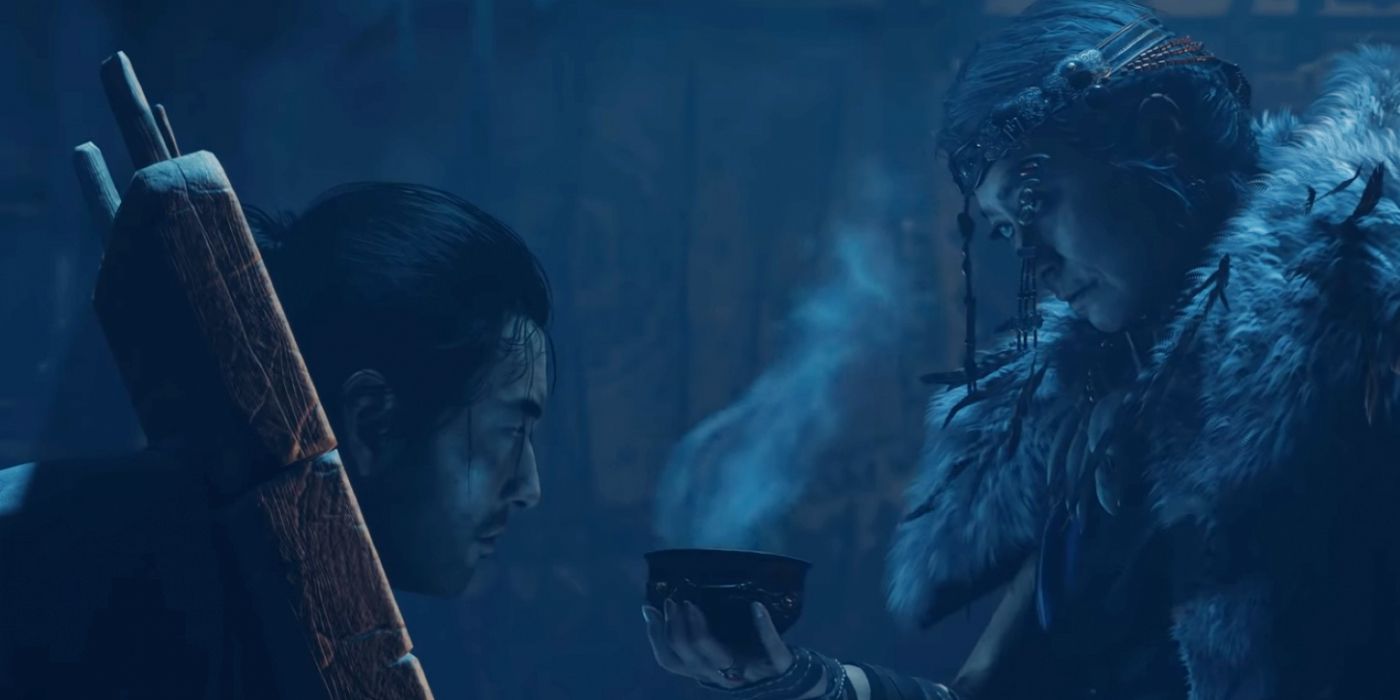 Ghost of Tsushima’s Iki Island expansion has Jin confront his past through psychotropic visions, which sometimes annoyingly interrupt gameplay.

Jin’s journey to Iki Island provides more Ghost of Tsushima gameplay and a handful of new features. Throw in the new storyline, and the Ghost of Tsushima Director’s Cut’s additions make for a great expansion, but there’s one major annoyance that becomes a detriment to the game’s usually gripping and satisfying flow: the Eagle’s poison. Jin being subjected to the Eagle’s psychotropic poison provides an interesting development for the narrative, but frequent interruptions warp the mechanic into something obnoxious and unnecessary.

Jin travels to Iki Island in order to address another front of the Mongol invasion. There, the invading forces are commanded by the Eagle, a mysterious figure who seems to have almost fanatical loyalty amongst her subordinates. Jin quickly learns this is because of the her special poison, which utilizes psychoactive properties in order to indoctrinate its victims to the Eagle’s cause. After Jin is drugged with the substance, he begins having intrusive visions of his past that prey on insecurities relating to his family, his honor, and more.

Related: Ghost of Tsushima: When You Should Play Iki Island

The frequent, poison-induced episodes include a variety of visual effects, like the screen turning entirely purple, the draw distance being greatly reduced, and visions of birds flying toward the screen. Jin sometimes experiences other hallucinations, and the episodes are frequently accompanied by the Eagle’s mocking voice. These sequences work well when they are integrated with a mission or part of a cutscene, and it’s a compelling way for Jin to confront guilt about his participation in his father’s attempt to pacify Iki when Jin when young. Unfortunately, the effects of the poison seep into the free-roam gameplay as well.

Ghost of Tsushima’s much-praised Guiding Wind system, which replaces traditional open-world HUD compasses and mini-maps, helps its gameplay feel like it progresses organically and at a constant pace. Mission introductions and conclusions offer breaks in this progression, but they are well implemented in the game’s quest structure, built around the Tales of Tsushima and Tales of Iki. Sticking to this established format would have left the Eagle’s poison sequences in places that are unobtrusive. Instead, the Iki Island expansion’s gameplay loop is frequently interrupted with quasi-cutscenes that do nothing but frustrate.

Jin may be sneaking through some pampas grass, for example, when the screen suddenly turns purple, and the Eagle’s voice chides him for behaving dishonorably in combat. Saving an imprisoned person in a random encounter with Mongols often results in Jin collapsing to his knees in front of the captive and having a vision of his father being killed. Other instances are less egregious, like finding a body near a road that, when interacted with, sets off a poison sequence.

The first couple times Jin has a poison-induced episode are interesting because of the novelty, but the interruptions quickly become annoying. The random sequences try to establish a certain atmosphere but only succeed in breaking immersion. They interrupt the player in the midst of whatever they’re doing in order to deliver exposition that is already adequately served through cutscenes and more scripted moments. Ghost of Tsushima‘s Iki Island expansion is more of what earned the base game so much praise, but minor inconveniences like the poison scenes stand out because they grate against the game’s otherwise enthralling gameplay.

Breath Of The Wild’s Completion Rate Explained: How To 100% BOTW

A passion for video games was instilled at a young age when Kyle Gratton and his older brother were gifted a Nintendo 64 with Ocarina of Time and Mario Kart. Graduating from the University of Kansas as an English and History major, with a minor in Film, Kyle enjoys discussing literature, movies, television, and especially video games. He currently writes features and reviews for Screen Rant’s games section, and dabbles in short fiction occasionally.