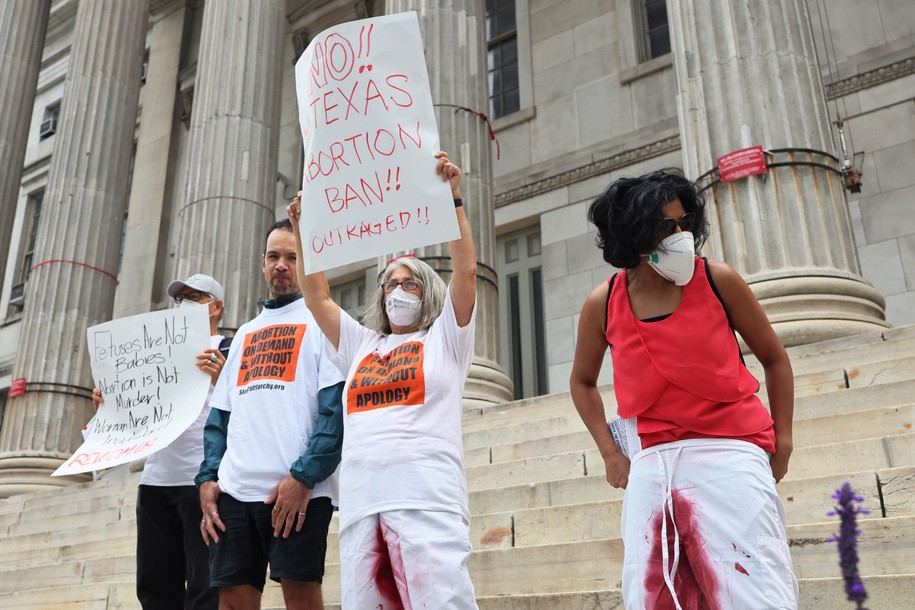 The FACE Act is important, but in some ways obsolete because it was written to combat the violent tactics of the forced birth movement. A 1994 law, the FACE Act “prohibits the use or threat of force and physical obstruction that injures, intimidates, or interferes with a person seeking to obtain or provide reproductive health services,” as Garland explains. “It also prohibits intentional property damage of a facility providing reproductive health services.” The forced birth movement has changed tactics, and Texas moved along with the times. Now instead of screaming in the faces of women attempting to exercise their constitutional rights, threatening to blow up clinics and killing doctors, the forced birthers will use the courts to bankrupt clinics and the individuals who work in them, subjecting anyone who helps women to huge costs.

“We have reached out to U.S. Attorneys’ Offices and FBI field offices in Texas and across the country to discuss our enforcement authorities,” Garland said. “We will not tolerate violence against those seeking to obtain or provide reproductive health services, physical obstruction or property damage in violation of the FACE Act.” That’s important, but unless “physical obstruction” and “property damage” can be interpreted to mean forcing clinics to close under the threat of financial ruin.

This could also be a warning to forced birth activists in Texas that the new law doesn’t give them free rein. “I think he was trying to send a signal to people on the ground that they need to physically leave clinics alone. I think there’s a concern that, from reports on the ground, activists are hanging out at the clinics and they’re watching who goes in and out.”

On Friday, President Biden called the Texas law “almost un-American.” Almost. But not quite? “The most pernicious thing about the Texas law, it sort of creates a vigilante system,” Biden said. No “sort of” about it—it exactly creates a vigilante system. “It just seems—I know this sounds ridiculous—it’s almost un-American, what we’re talking about.” That’s not a bit ridiculous because it is creating a vigilante system and it is asking the general citizenry to pry into the most private business of their friends, family, and neighbors for the financial gain of a $10,000 bounty for every abortion they successfully prosecute. That’s about as un-American as you can get.

He also said—and this part is spot on—that the Texas law is an “unprecedented assault on a woman’s constitutional rights under Roe v. Wade, which has been the law of the land for almost fifty years,” and that he is launching a “whole of government” effort to respond. They should be starting with the list of ideas from The Nation’s justice correspondent Elie Mystal. Qualified immunity for providers would be an excellent start.

“Conservatives love to defend qualified immunity when a cop shoots a black person to death, or a CIA agent tortures a suspected terrorist,” Mystal wrote. So use it to make abortion providers and counselors and clinic staff federal officials who will have qualified immunity—operating under the federal government’s authority—by executive order. He suggests calling these new federal officials “privacy protectors,” operating in pop-up clinics, like the vaccine distribution centers the administration has created on federal property or in mobile clinics, “making the vehicle itself federal property that the state government could not interfere with.”

That’s one solution, but the problem is soon going to be much bigger than Texas. Republican lawmakers in at least five other states are going to use the Texas law as a template, knowing that the Supreme Court isn’t going to provide an obstacle.

House Speaker Nancy Pelosi said last week that the House will take up the Women’s Health Protection Act, legislation that would codify the right to choose nationwide, preventing states from putting medically unnecessary restrictions on abortion. The House returns to work on Sept. 20, and is expected to vote on the bill soon after. The Senate, however, is unlikely to pass it. That is, unless at least one of the two Republican senators who support abortion—Lisa Murkowski and Susan Collins—are willing to break a filibuster for that right.

Since Democrat Joe Manchin calls himself pro-life and is opposed to ending the filibuster, it will take both of the Republicans and the other pro-filibuster Democrats, Kyrsten Sinema, to break it. So far the only statement from Sinema has been to tweet out a Justice Ruth Bader Ginsburg meme. Which is not much of a statement at all from one of the most powerful 100 lawmakers in the world.