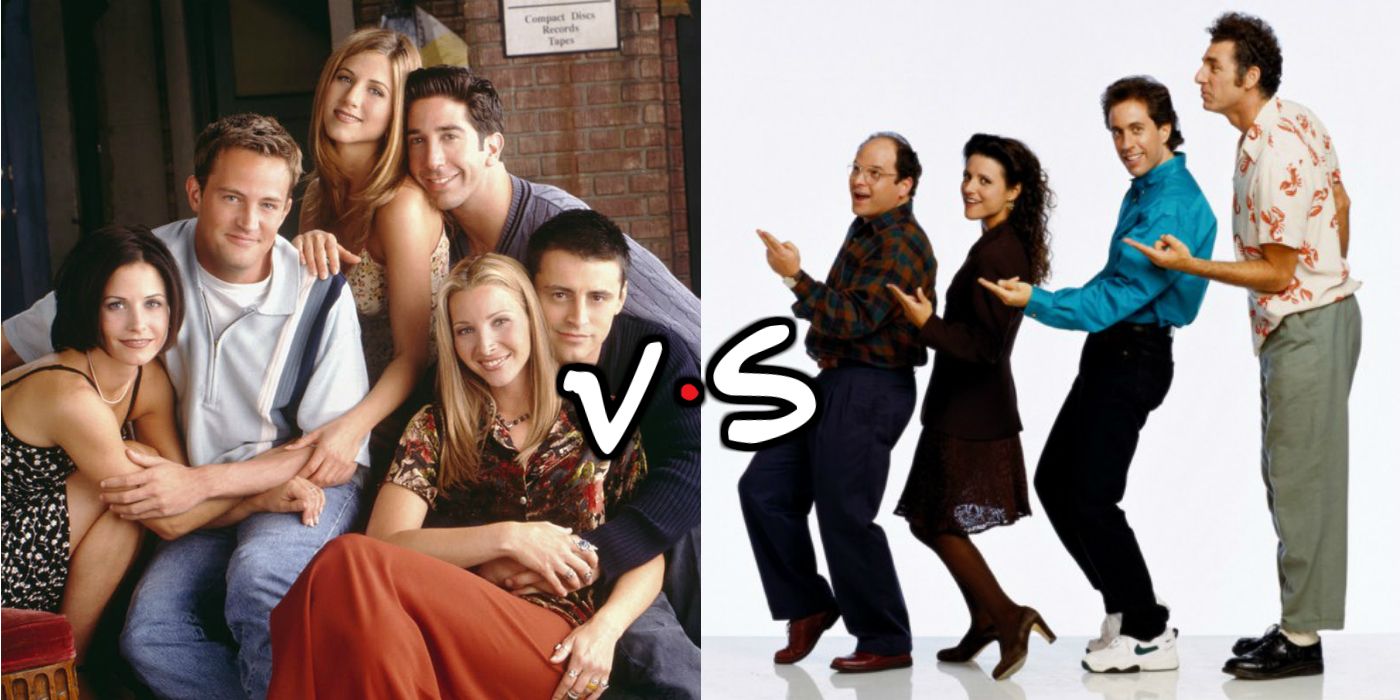 The rivalry between Friends and Seinfeld has been revived with recent changes in both shows’ streaming status, so let’s look at why the two are so often compared, and which one of them is the real winner. It’s been more than three decades since Seinfeld premiered, and the “show about nothing” remains a critical darling. Friends, meanwhile, celebrated its 25th anniversary in 2019, and is still a cultural behemoth.

In addition to being one of the highest-rated TV shows of the 1990s and early 2000s, Friends is also one of the most-watched shows of the streaming age. When the series was on Netflix, it consistently topped lists of the most-streamed series, suggesting the show’s continuing appeal. When HBO Max launched, it spent more than $425 million for the rights to Friends, hoping that the episodes and a Friends reunion special would be a major draw for the fledgling streaming service. In response, Netflix licensed the complete run of Seinfeld, hoping that another beloved ’90s sitcom would fill the gap for nostalgic binge-watches. The move has once again forced comparisons between the two series, causing debate as to whether Seinfeld is a suitable replacement for Friends, and which show is better.

It brings what was a very ’90s discussion into the modern-day, which is a reflection of the enduring quality and popularity of the two TV series. There are a few factors as to why Friends and Seinfeld are rivals, and ultimately, regardless of opinion, there is one clear winner.

Why Friends & Seinfeld Are Rivals

Seinfeld and Friends are frequently compared, but why is that? The two shows are actually quite different in their sensibilities, with Seinfeld purporting to be a show about nothing where its characters don’t learn and grow, contrasted to the warmer hangout vibe of Friends, which had clearer arcs across seasons and the series as a whole. Nonetheless, there are enough similarities between them, albeit fairly superficial, that have helped turn them into rivals.

Both Friends and Seinfeld follow a group of friends living in New York City, detailing their relationships, jobs, and general lives, with an apartment the core setting for both. They even loosely share the same universe, with the two series linked by Mad About You (which both directly crossed over with). But on top of that is the fact they were on the air at the same time, airing together as part of NBC’s Must-See TV block on a Thursday night, and represented the two most popular sitcoms of the ’90s (and two of the biggest ever).

The different approaches of Friends and Seinfeld to similar subject matter helped to invite comparisons. Seinfeld represented a more sardonic and cynical worldview, represented in jokes like the Junior Mints gag, in comparison to the more heartfelt emotional appeals of Friends, so which series one prefers can depend on their personality. Since both have developed strong fanbases over the years since they finished their runs on TV, and remain a big part of cultural history, then the debate has never stopped. It’s even been stoked by Jerry Seinfeld, who has previously accused Friends of ripping off Seinfeld (only half-jokingly), and it continues to be a point of division, but who won?

Related: Seinfeld: The Real Story Behind The Marble Rye Episode

Seinfeld Beat Friends In The ’90s

Friends and Seinfeld were the two biggest sitcoms of the ’90s, but while each had legions of fans watching them on NBC, it was Seinfeld who won the battle back then. Although Seinfeld started in 1989, it wasn’t until the early-mid ’90s when it really started to grow its audience to incredible levels, and became not only the most popular sitcom of the time, but one of the biggest TV shows overall too. By season 4, when the series when fully hitting its stride, it started to average over 20 million viewers, but it was the next few years that were truly mammoth.

Seinfeld season 5, which aired in the 1993–94 TV season, averaged just under 30 million viewers, and was the third-highest rank series according to Nielsen ratings. That was Seinfeld‘s last year without Friends alongside it on NBC, but rather than see the bright-new-thing become more popular, Seinfeld only got bigger. From 1994 to 1998 (when it concluded its run), Seinfeld was always in the top two highest-ranked TV shows as per Nielsen, alongside IS, finishing as number one on two occasions.

Friends was massively popular as well, but it couldn’t quite compete with Seinfeld‘s numbers: The best it could finish when Seinfeld was also on the air was third, with an average of 29.4m viewers for season 3. Friends only finished as the number one show a single time, and that was the 2001–02 TV year, for Friends season 8. Across its run, Friends averaged 23.6 million viewers, contrasted to Seinfeld‘s 26.6 million. Neither was the big winner of the ’90s in terms of awards – that belonged to Frasier, which won the Emmy for Outstanding Comedy Series five years in a row – but in that area too, Seinfeld had slightly more success than Friends: Seinfeld has 10 Emmy wins and 68 nominations, contrasted to Friends‘ six wins and 62 nominations.

Friends Is The Winner Overall

Seinfeld beat Friends at the time, and it remains more of a critical darling now, for example holding a Tomatometer score of 89 percent, compared to Friends‘ 78 percent. But, while Seinfeld is generally held in higher regard by critics, with particular praise for its writing, it cannot match the enduring cultural popularity of Friends. Even as it enters its 25th year, Friends remains one of the biggest TV shows in the world, with no sign of its popularity dipping anytime soon.

Both series have been the subject of mammoth streaming deals, but eyebrows were particularly raised when Netflix paid $100 million to keep Friends through 2019. Yes, $100m for just a single year. HBO Max’s $425 million deal further suggests just how much of a money-maker Friends still is. Netflix paid even more for Seinfeld, forking over $500 million over five years, but the timing of the move suggests that it was clearly a substitute for Friends, not the other way around. Seinfeld didn’t cause a similar influx of views to its previous streaming home, Hulu, and it seems unlikely that it will have the same success Friends did on Netflix.

Friends merchandise is everywhere; there are entire festivals dedicated to it that constantly tour and sell out; the Friends reunion special attracted major celebrities who grew up with the show. Friends has also had a much greater impact overseas, in part due to its streaming availability and more glamorous depiction of New York life. Because it ran into the 2000s, Friends has a nostalgic appeal to a millennial generation that has made it a streaming hit and object of viral GIFs and memes. Whether you think Seinfeld is better than Friends is a matter of opinion, but as things stand Friends is definitely the bigger TV show with a popularity that’ll seemingly never end, which gives it the win in the long run.

More: Friends: Were Ross & Rachel On A Break?

James is Screen Rant’s Movies Lead Editor, having started out as a writer for the site back in 2019. A Sports Journalism graduate, James quickly realized that supporting Sunderland AFC was painful enough without writing about it, and so decided to talk a load of rubbish about movies and TV instead. Formerly the TV editor at WhatCulture, he has a particular love of Star Wars (The Last Jedi was great), Game of Thrones (season 8 was good), and Harry Potter (J.K. Rowling…never mind) – y’know, all that really niche, nerdy stuff. Spending most of his days editing articles about or writing on movies and shows, James likes to really get away from work and unwind by, er, watching movies and shows. He’s fuelled by pint-sized cups of tea, peanut butter, more tea, and a quiet, constant anger (like the Hulk, only not green, or strong, or big).