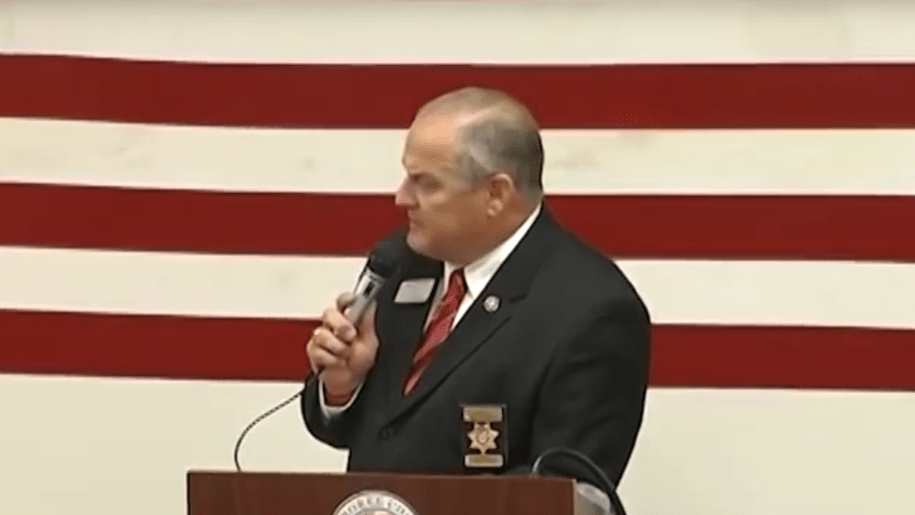 Huffpost reports that at the time of the 2012 revelations, Garrison had been Cherokee County sheriff for 20 years. And while the photo may have been taken before he was elected sheriff, it seemed to have been taken while he was a law enforcement officer in Georgia. As was reported at the time, Georgia has outlawed the wearing of Klu Klux Klan masks and hoods for decades. In fact, conservatives have attempted to use the law to whatabout their own racism and Islamophobia in recent years.

The Journal-Constitution reports that even with the KKK hood, the racism, the breaking the law, the racism, and the racism, Garrison won reelection that year with 68% of the vote. He retired in 2016. His benefactor here, Speaker Ralston, has been very open in his racist voter suppression tactics and beliefs for some time now. His objections to mailing out absentee ballots during the pandemic were as clear as the photo of Garrison wearing a KKK hood and robe: “This will be extremely devastating to Republicans and conservatives in Georgia. Every registered voter is going to get one of these. … This will certainly drive up turnout.”

The Judicial Qualifications Commission, created by a constitutional amendment in 1972, is supposed to “conduct investigations and hearings with respect to complaints of misconduct by Georgia judges, and is also authorized to issue opinions regarding appropriate judicial conduct.” A racist House speaker, whose only workable platform is suppressing Black people’s constitutional right to vote in his state, gives a position on a state commission that investigates judicial misconduct—frequently racist misconduct—to a former law enforcement official with KKK skeletons in his closet. That’s one of the less subtle versions of institutional or systemic white supremacy in our country.