Essex & Durham through in One-Day Cup 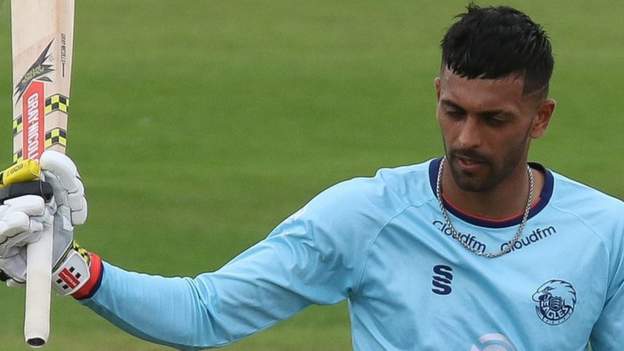 Convincing wins for Essex and Durham in their penultimate matches in Group A saw both sides ensure their place in the knockout stages of the One-Day Cup.

Durham made 289 against Worcestershire, with Alex Lees smashing 93, and the Rapids were 46 runs short of the total.

In Group B, wins for Nottinghamshire and Surrey boosted their chances.

The final positions in Group A are being now decided on a points-per-game basis following the Covid-enforced cancellation of Gloucestershire’s match with Middlesex on Sunday.

Leaders Durham and second-placed Essex can both still finish top and go straight through to a home semi-final, while Lancashire, Hampshire, Gloucestershire and Middlesex are vying for the third and final qualification place.

But Middlesex, who are seventh in the nine-team group, need an unlikely set of results on Thursday to qualify.

Essex and Durham race through

Progress was simple for Essex as Sussex struggled from the off in reply to the home side’s 321-8 at Chelmsford.

Rymell and Khushi laid the platform with sensible knocks and Wheater provided the fireworks, with a thrilling half-century that included three fours and three sixes.

Sussex, who have now won just one of their seven matches, never got close to their target.

Travis Head (38), James Coles (32) and David Wiese (36) all got decent starts, but Ryan ten Doeschate (4-34) removed the latter two to end any realistic chances of a dramatic run-chase.

Durham’s progress was similarly simple, with in-form opener Lees making 93 from 109 balls as they beat and knocked Worcestershire out of the competition at New Road.

The solid base allowed David Bedingham (66) and Ned Eckersley (36) to play with freedom and up the tempo and both did just that as the away side closed on 289-9.

Jake Libby (76) stood defiant for much of the Rapids reply, but he was only man to reach 30, with Paul van Meekeren and Liam Trevaskis grabbing three wickets apiece.

Josh Baker and Charlie Morris both scored 25 and Jacques Banton added 22 in a spirited late rally that saw the hosts achieve some respectability in reaching 243 all out.

Notts Outlaws kept alive their chances of a top-three finish in Group B with a nervy and dramatic final-over victory against struggling Northants Steelbacks in their final match of the league stages.

Victory at Gorse Lane, Grantham seemed a formality when Notts were 154-3 having restricted their visitors to 210 all out.

Fine knocks by Ben Compton (71) and Ben Slater (53) seemed to have ensured a serene win.

But with wickets tumbling and the runs drying up after Compton was bowled by Saif Zaib, it was left to Dane Paterson to seal the win, the South African clubbing a six for victory with two balls to spare to take Notts up to second.

Earlier, Luke Procter (44) and Emilio Gay (40) provided some hope of a decent total from a measured start, but Northants lost six wickets for 80 runs as they collapsed from 130-3 and ended up all out one ball short of completing their 50 overs.

A stunning bowling spell from spinner Liam Patterson-White did the damage, the left-armer taking 5-19 from his 10 overs.

Surrey shine to keep on track

Also in Group B, Surrey moved up to third with a game still to play, as Tim David bludgeoned 140 from 70 balls to lead his side to a seven-wicket win over Warwickshire at the Kia Oval.

But David destroyed the Bears attack, hitting nine fours and 11 sixes in a remarkable innings to all but end the visitors’ hopes of progressing with 10 overs and two balls still remaining.

Warwickshire’s batting line-up all reached double figures however, only Ed Pollock (30), Matthew Lamb (31) and Craig Miles (31 not out) managed to reach 30 as they posted 268-9.

Cameron Steel (4-39) and Conor McKerr (4-64) were the chief tormentors and thanks to David’s gargantuan efforts, Surrey had little trouble in their response.

Leicestershire’s four-wicket over Somerset at Taunton keeps the Foxes in the hunt for a top-three finish and leaves Somerset as one of five sides on eight points heading into the final round of fixtures on Thursday.

But Leicestershire had little trouble in getting over the victory line with more than five over to spare.

Captain Lewis Hill (107) led from the front and Louis Kimber made a rapid 85 from 57 balls in a fifth-wicket stand of 158 which proved the difference.